The GOP nominee flashes odd smiles at the most inappropriate times. What's behind the grin? 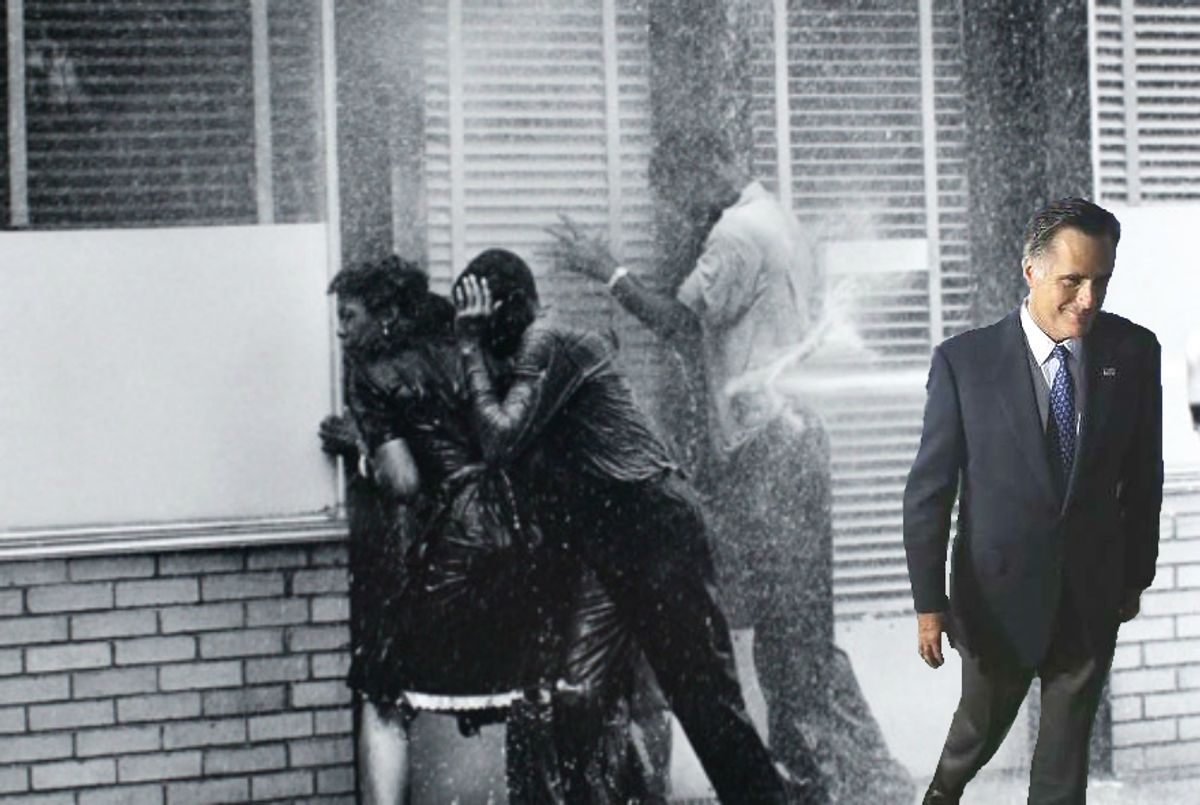 After his gaffe-tastic British visit in July, I found myself asking "What's wrong with Mitt Romney?" It's hard not to ask it again. Two days after his shameful attack on President Obama in the wake of the killings of four Americans in Benghazi, Libya, one iconic image continues to fascinate: Romney's odd smirk as he wrapped up his poorly received remarks and left the podium Wednesday.

The AP photo of Romney's smirk is everywhere. It predictably launched a Tumblr, "Smirking Mitt Walking Away From Stuff," where you can take the now-infamous Romney image and put it against the backdrop of your choice. My personal favorite is Romney smirking as he walks away from three civil rights protesters trapped by water blasting from a fire hose. But there are plenty to choose from; go check out – or create – your own favorite.

Sometimes it helps to laugh. But the number of Romney smirks that intrepid Internet sleuths have discovered is also kind of disturbing. It betrays a preternatural sense of entitlement and self-satisfaction that comes out, often inappropriately, in all sorts of ways, from his odd remark that "I like to be able to fire people that provide services to me" to insulting the cookies supporters served him or the rain gear fans wore to a NASCAR event. It seems related to the calm self-importance with which he belittled British planning for the Olympics, insulting our closest ally. The smirk is a cousin to another odd Romney tic – his tendency to chuckle at the wrong time, like when he was trying to deny cutting the hair of a gay high school classmate. Who chuckles when they're trying to project compassion?

The smirk underscored the rank political opportunism of Romney's Libya gambit. No matter whether you think the president bears blame for the situation or not, it's impossible to imagine not being moved by the death of four Americans in service to their country. It's impossible to imagine flashing a proud grin after making comments about the situation. That's what was so haunting about Romney's performance overall: There was no sense of grief about the men who died, there was only his evident self-satisfaction in finding a new way to hit the president. When the shocked pool reporters asked Romney directly whether he might have phrased his comments differently had he known about the death of Ambassador Chris Stevens, his callousness was stunning:

Reporter: If you had known last night that the ambassador died, and I am gathering you did not know –

Reporter: If you had known that the –

Romney: I am not going to take hypotheticals about what would have been known and so forth we responded last night to the events that happened in Egypt.

The brass that it takes to call Stevens' death a "hypothetical" is breathtaking. Or maybe it's not brass. It's almost sociopathic.

There's a reason we can't look away from Romney's smirk. But I predict that the last and best Tumblr image will be smirking Mitt Romney walking away from his disastrously unsuccessful campaign for the presidency.