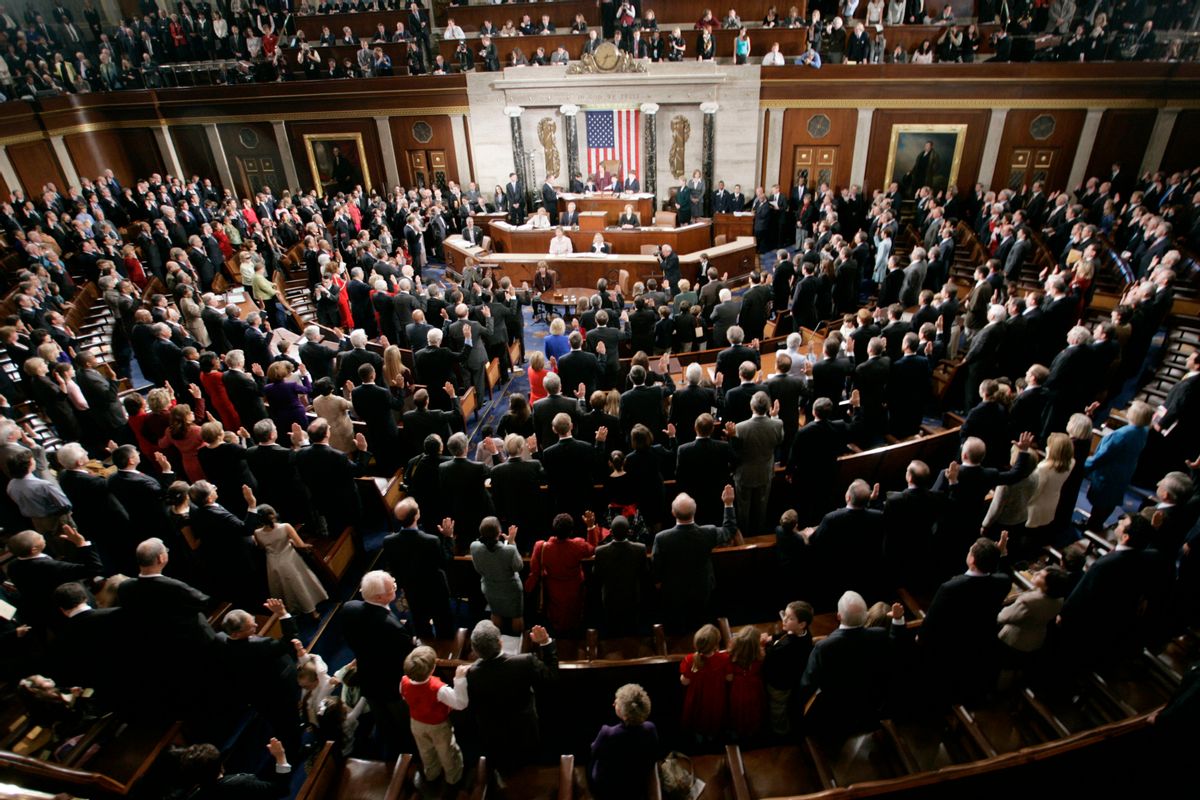 With just a couple of weeks left in September, members of the House and Senate hurried back to Washington after their August recess and the party conventions, ready to get some legislating done and impress their constituents before they head back home for the final stretch of their reelection campaigns.

Yes, I’m auditioning for a job at The Onion.

Members hustled back to the capital all right, not to get much accomplished for the good of the nation but to party down at events designed to scrape every last nickel of campaign contributions from the jam pots of cash held by K Street lobbyists and special interests.

The Capitol Hill newspaper Roll Call reported that as of this past Monday, House Democrats had 184 events scheduled through the end of the month — that’s according to a directory from the Democratic Congressional Campaign Committee.

“Their GOP counterparts, according to a list from the National Republican Congressional Committee, have more than 110 breakfasts, coffees, lunches, dinners and receptions on the calendar. That doesn’t include scores more Senate fundraisers and intimate industry-focused events not logged on the official lists.”

At Politico’s “Influence” tip sheet, a Seinfeld fan dubbed this crass carnival of campaign loot “A Fundraising Festivus for Do-Nothing Congress” and proceeded to list a page and a half of events — just the tip of the cold cash iceberg.

There are so many fundraisers scheduled — from meals, briefings and receptions to wine and whiskey tastings — lobbyists are overwhelmed with invitations. Their dance cards are full. What’s more, many influence merchants already have maxed out on the legal limits allowed for giving money directly to candidates and political parties. Others, like Larry O’Brien, founder of the OB-C Group, “held back a few thousand dollars that he can donate to PACs this round,” he told Roll Call:

“’I always found some last-minute desperation, so I thought it made some sense to keep a little bit of resources for this point in the cycle,’ he said. ‘And I will be utilizing those funds over this next two-week period.’”

If you were wondering what this money can buy — campaign contributions like the swag being scooped up in Washington this month — simply look to the skies: Lockheed Martin’s F-22 Raptor, one of the most expensive projects in the history of defense spending. The Center for Responsive Politics’ Open Secrets blog notes:

“The F-22 was built to fight a Soviet jet that was never produced, and despite American involvement in two wars, the stealth fighter has yet to fly a single mission — in part because of cost. Each hour of flight costs almost exactly as much as the median American household earns in a year, about $50,000. Adding to that, the F-22 has been plagued with problems — most notably the troubling possibility that the jet is suffocating its pilots. Former Secretary of Defense Robert Gates once ridiculed proponents of the F-22 for suggesting that the jet might be used to go after Somali pirates.”

This week, the non-partisan watchdog POGO — the Project on Government Oversight — issued a report on the same day a House subcommittee hearing investigated the F-22’s troubled flight path:

“All but one of the 25 subcommittee members have received contributions in the current election cycle from individuals or political action committees associated with Lockheed Martin, the prime contractor on the F-22…

On average, members of the House Armed Services Subcommittee on Tactical Air and Land Forces have received $6,130 this election cycle from Lockheed employees or political action committees, POGO found.”

Witnesses testified to the subcommittee that the F-22 is safe to fly. “It was kind of a pro forma hearing,” POGO’s Ben Freeman told US News and World Report. “As someone who’s looking for legitimate oversight of the F-22 it was disappointing. The result of this hearing was largely that the House bought into what the Air Force was saying about the F-22.”

In the POGO report, Viveca Novak of the Center for Responsive Politics says:

“This is a classic example of one of the unfortunate realities of our system: Members of various congressional committees depend inordinately on campaign contributions from the very interests they are supposed to be overseeing. If there are problems with this aircraft, will the actions of the lawmakers be tempered by the fact that their campaigns are partially funded by the companies that are making the aircraft?”

Good question, but one that will be lost over the next couple of weeks in Washington as the most important query becomes, “To whom do I write the check?”