The investment bank collapsed four years ago today, and yet our politicians have done little to fix the system 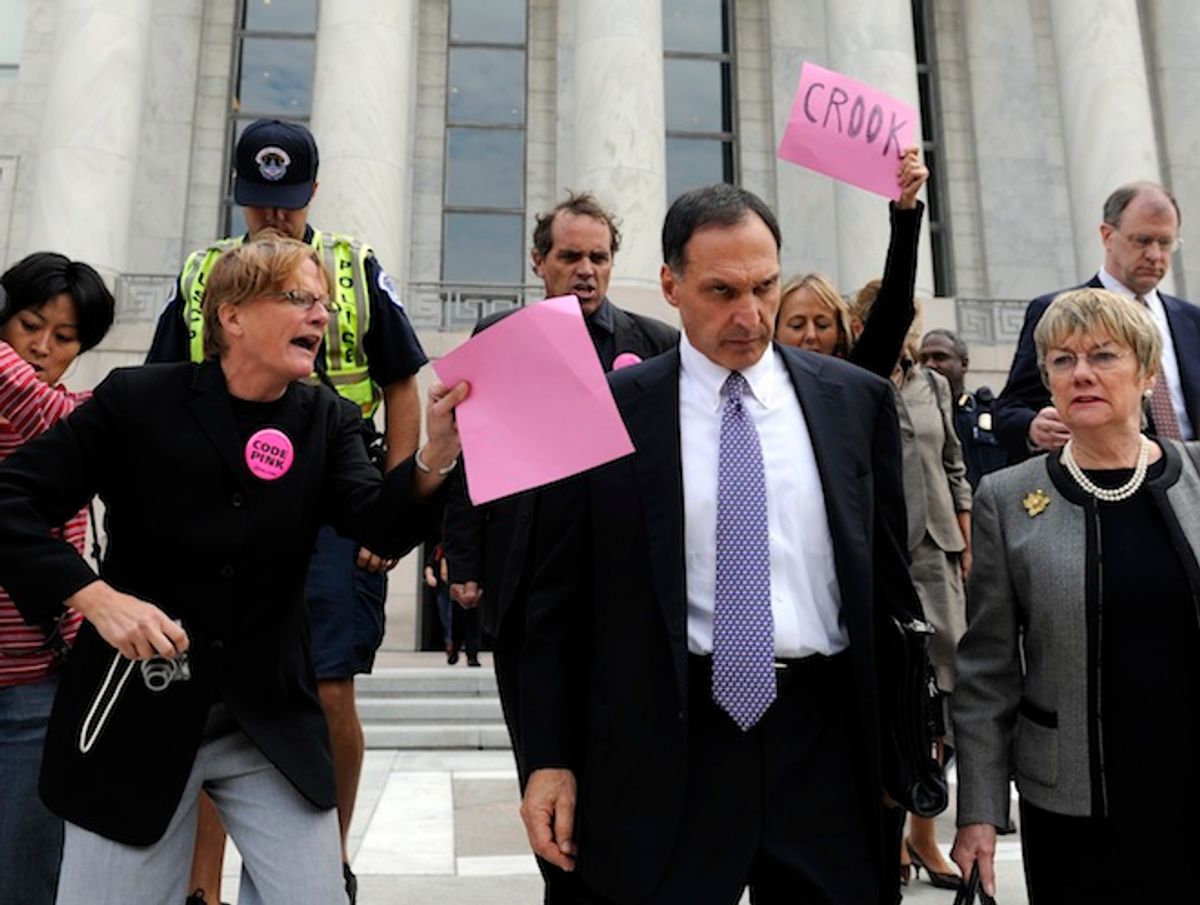 In this Oct. 6, 2008, file photo, Lehman Brothers Holdings Inc. Chief Executive Richard S. Fuld Jr., wearing tie, is heckled by protesters as he leaves Capitol Hill in Washington after testify before the House Oversight and Government Reform Committee on the collapse of Lehman Brothers. (AP/Susan Walsh)
--

Four years ago today, Lehman Brothers collapsed as Hank Paulson and his colleagues made the fateful decision that free market principles demanded that at least one bank crippled by the deteriorating financial system had to be sacrificed at the altar of moral hazard. These “deciders” had no idea of the firestorm they were igniting. They did not foresee that the financial system that had evolved during 30 years of deregulation (based on specious economic theory and ideology) was so interconnected that it would collapse like a house of cards. Within a few weeks, the U.S. taxpayer was “all in” to the global banking network. The public focuses on the TARP bailout of the banks and AIG, but a few people understand that the risks taken on by the U.S. government made those amounts seem like chump change by comparison. The Fed effectively guaranteed the money market funds, all inter-bank lending and the commercial paper market. It even saved the European and Asian banks from failure by guaranteeing the foreign exchange markets.

Are we better off, vis-a-vis the financial markets, than we were four years ago? In one sense, yes, we are. The Dodd-Frank financial reform legislation was enacted and regulations are limping home, wounded by the relentless assaults of bank lobbyists and politicians in their sway. Markets will become more transparent and risks will be managed better – assuming, of course, that the regulators can work out how foreign jurisdictions can be prevented from offering the banks weaker regulatory regimes to attract their business. The biggest concern on this front by far is the European Union. Their lawmakers must deal with the UK’s politicians and regulators, serving a national interest that is thoroughly dependent on the banking business. They are even more at the service of the big banks than U.S. politicians, campaign contributions notwithstanding.

And the Volcker Rule, whose importance is best demonstrated by the ridicule and criticism heaped on its implementing rules, just might put a dent in the ability of the banks to put the economy at risk so that that this year’s bonus pool can be optimized by maximizing short-term profits.

Unfortunately, the disease lingers on even as the symptoms are treated. Thirty five years of deregulated free-for-all trading has changed the way we all think about the system. There was a time, before the Reagan administration commenced the dismantlement of the New Deal (including financial regulation), when investment was primarily about the fundamental value of shares of stock and corporate and municipal bonds. Investors acquired with a view to hold their investments long enough to realize this fundamental value. But the investing public is now enthralled by the mythic trader, able to spin gold from straw using only his sharp wits. Investment is largely accomplished through pooled vehicles like pension funds and mutual funds. These funds, more and more, resemble hedge funds, and the fund managers are compensated accordingly. The quest is a search for “alpha” returns that exceed the markets. Investment in a sound company or a plain vanilla municipal bond seems so very boring when the opportunity to grab a fraction of the limitless wealth of the Wall Street trader is on offer. The problem is that alpha is unachievable, except by happenstance, as study after study demonstrates.

Make no mistake, Wall Street likes this investor infatuation with alpha. Every confidence man knows that the perfect mark is someone who is intent on getting an advantage over the common “Joe.” The pooled funds are increasingly investing in the market, not in projects or companies. They act as if the markets somehow work fairly and predictably so that they can execute some tailored strategy devised by their fund managers that secures healthy returns with minimal risk. After decades of indoctrination, they have yet to shake the ideas espoused by Ayn Rand and the Efficient Markets Hypothesis perpetrated on the world by the University of Chicago.

Unfortunately for us all, Wall Street has used massive advances in technology and quantitative analysis to detect every move by institutional investors before it happens and front run (in the common, if not legal, meaning of the term) the people who might, under other circumstances, be customers. The Street then sells these treasured customers derivatives touted as effective risk-management tools, all the while knowing that only the banks’ horde of in-house quantitative wizards have any hope of understanding what a fair price might be. When pension funds and mutual funds invest in the “market,” they are like the insect who flies into the maw of the Venus flytrap. This dance of death has not changed since Lehman collapsed.

To make matters worse, all of this is controlled by a narrow oligopoly of banks, having gone through decades of consolidation, initially triggered by deregulation and culminating in the mother of all creative destruction events, the evaporation of Bear Stearns, Merrill Lynch, Lehman, Washington Mutual, Wachovia and AIG in the financial crisis. The remaining banks enjoy such market power that even the Dallas Fed, no bastion of socialist theory, observed in a report calling for the break-up of the big banks to avoid too-big-to-fail bailouts: “When competition declines, incentives often turn perverse and self-interest turns malevolent.”

Financial reform as it is currently structured will reduce the risk of recurrence of the events of 2008. But, financial crises will plague the economy until the trader fever is broken and fundamental value replaces alpha as the motivation behind investment decisions. Only then will the trader beast be starved sufficiently to tame it.