Waterways surrounding cities were once filled with toxic industrial sludge. Now they're the new recreation frontier 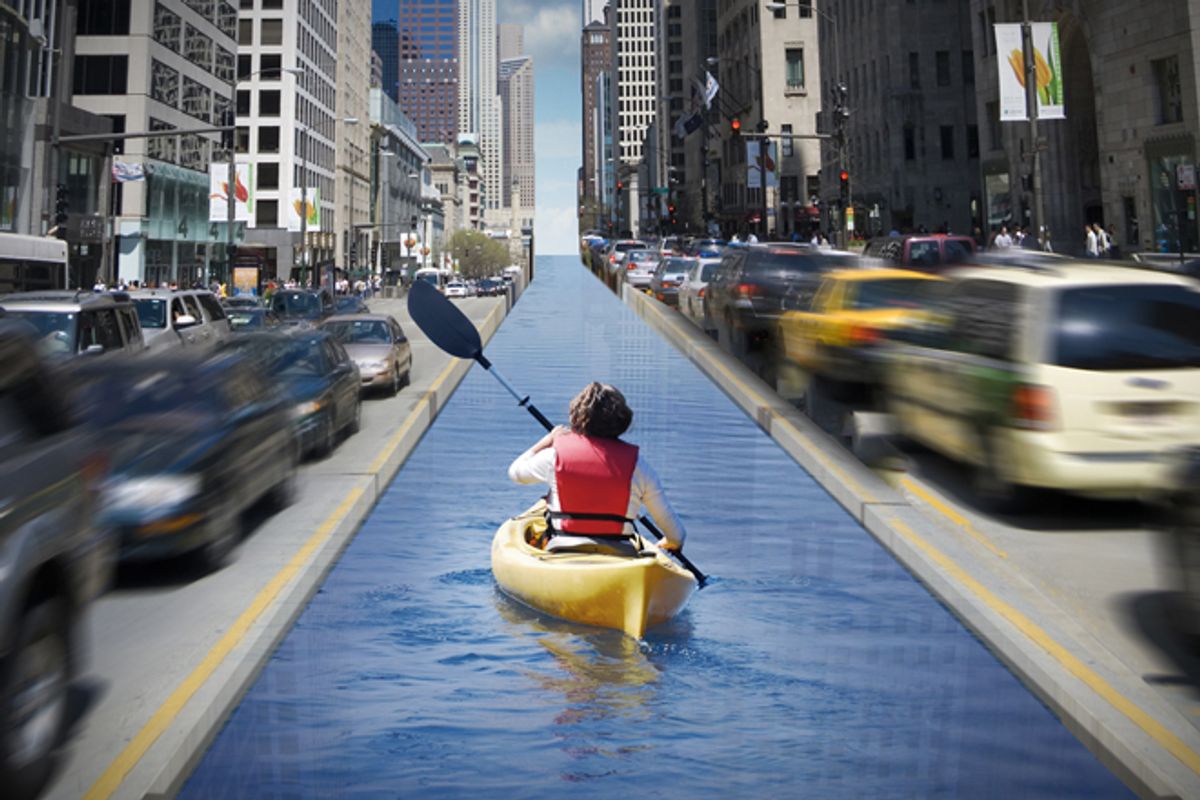 A month ago, sewage in the Hudson River nearly canceled New York's first Ironman swim. Yet last week, there was Martin Strel jumping into the water at the foot of the Statue of Liberty. The gregarious 57-year-old Slovenian has swum the lengths of the Amazon, Yangtze and Mississippi Rivers, so this particular 2.2-mile jaunt was really no big whoop. The swim, from Liberty Island to Battery Park City, was part of an effort to call attention to urban waterways (and partly, just for kicks). But something about the scene felt all wrong. Watching Strel crawl through the choppy gray water astride the steely Manhattan skyline, with exhaust-belching ferries and barges churning by, he looked too pink, too soft, and just too human to be there.

Centuries of boat traffic, heavy industry, sewage runoff and toxic dumping have ingrained in us the idea that urban waterways are not places for people. Even as cities have rushed to the water's edge over the past couple of decades, building elaborate waterfront parks and esplanades, few have taken the next logical step: encouraging residents to dive in. "Twenty-five years ago, I bought a pair of wire cutters and cut a fence and declared the L.A. River legally open," says Lewis MacAdams, president of Friends of the Los Angeles River. "But legally, no one is supposed to be in the river. It's still on the books as a $500 fine or six months in jail."

People like MacAdams and Strel are early adopters of the idea that cities' rivers and canals, cleaner than they've been in a century, are ripe for recreational use. Just a few short years ago, the notion would have repelled most people. But we've clearly reached a tipping point. Kayakers have become a sporadic sight on Cleveland's Cuyahoga River, the industrial-sludge channel that famously caught fire in 1969. Clammers have returned to dig in the sands around Boston's once-notoriously polluted harbor. Last month, the New York Times reported that, after years of dancing around them because they're so difficult to clean, the Environmental Protection Agency is finally going all-in on revitalizing urban waterways. "The public wants this stuff picked up and hauled away," a consultant on one of the EPA's waterway Superfund projects told the paper.

This public pressure, combined with new technological cleanup advances, is changing some cities' waterways so quickly that they may soon be unrecognizable. In fact, this transitional moment might be the most intriguing time to explore such areas, especially for anyone who loves the hidden and ignored corners of cities where few dare to venture -- those weedy, quiet, eerily beautiful abandoned spots that, just a few years from now, might be jam-packed with backstrokers and jet skiers. "It's a very urban experience," says Jim Burns.

Burns is a fisherman who lives in Los Angeles and "can be at a mountain stream within 25 minutes." But more often than not, he chooses to fish in the L.A. River, a brutalist, concrete-lined waterway that offers an unusual -- and unusually peaceful -- refuge from the city's throb. "I'd lived in Los Angeles for 34 years and didn't even know there was a river," says Burns. Three years ago, he and his son heard about it and decided to find it. "It was an incredible hassle. L.A. is lots of concrete and freeways. We would spot the river and try to find access to it, and you'd end up behind a Target or something, and the parking lot would be right up against the river with barbed wire and No Trespassing signs."

Eventually, Burns found his access points. "It's concrete, and the sides are super-steep," he says. (The U.S. Army Corps of Engineers channelized the river in the '30s to stop it from flooding.) "You walk down there in your vest and hat, and there are these huge power lines on steel frames above you. You'll see bicyclists, bird-watchers, other fishermen. Hispanic fishermen who use traditional means and eat the fish. And a lot of homeless people, who I've met and who are usually super-nice." In addition to the carp he catches, Burns sees Canada geese, mallards and herons with 6-foot wingspans. Where the bottom of the channel wasn't sealed with concrete, trees and plants sprout from the sandy bottom. Graffiti and the occasional wrecked car line the banks, all of it combining to create a surreal tableau of urban and pastoral. "It's like a secret spot that only the people there know about," says Burns. "You're not going to meet just anyone down there. It's not for everybody."

At least, not for now. But the L.A. River's resurgence promises to be one of the most astonishing urban revitalization projects of the coming decade. Until two years ago, it wasn't even legally a river, but a flood-control channel. "That was when the EPA declared it a traditional navigable waterway, which is bureaucratic shorthand for: It's a river," says MacAdams. And according to the California Public Trust Doctrine, the state's rivers belong to the people. On Aug. 28, Gov. Jerry Brown signed SB 1201, landmark legislation that legalizes access to the river for the first time in nearly a century.

Once that happens, the transformation could come quickly; there's a huge amount of pent-up demand for access. Guided kayak tours that began last summer sold out their 260 slots in 10 minutes. A 2008 report showing that fish from the river were safe to eat has sent more and more anglers searching for its tilapia, catfish and even largemouth bass. "These activities are very important," says MacAdams. "They give people the image of a living river." Indeed, there's something about the potential opening up of these urban waterways that sparks fevered interest. Maybe it's because, in suddenly gentrifying cities, where forsaken space is quickly disappearing, they represent a last wild frontier. Waterfronts were, until recently, often the poorest, most dangerous sections of cities, places where people still lived in Hooverville-style shacks and cooked over open fires. As cities reclaim these waterways, the impoverished areas around them are dissolving, replaced by prospects for new people -- and of course, new profits, as well.

This was the case in Ogden, Utah. When Matthew Godfrey was elected Ogden's mayor 12 years ago at the age of 29, he immediately set to work cleaning up the putrid Ogden River for recreational use. "We wanted to be the high-adventure recreation capital, and we saw the river as an asset," he says. "We were hoping to create a blue-ribbon fishery, we saw kayak potential, we thought we might be able to have a rodeo." But surprisingly, opposition to the cleanup came from the city council's most liberal members, who worried about displacing the poverty-stricken residents living on the river's banks. "They were in these little shotgun houses that had lined the river since the 1920s," says Godfrey, "tiny homes that probably expired their useful life in the '40s."

Eventually the cleanup went through, removing 13,000 tons of concrete, trash and abandoned cars from the river -- and, ultimately, the shacks and the people who lived in them. The city of Ogden now has kayak events and, according to Godfrey, "one of the best holes for fly-fishing in any of the rivers in the region." But even waterborne gentrification can lead to displacement.

So, however, can it create opportunities. A multi-decade effort to turn Houston's main waterway, the Buffalo Bayou, into a recreational destination has generated its own mini-economy of water-oriented businesses. "There's a private company called Bayou Shuttle run by a young guy who saw the potential for canoeing and kayaking on the Bayou. He's running a business and he's doing great," says Guy Hagstette, who's overseeing part of the Bayou's rebirth. Now the city is looking to generate $250 million to acquire more land along the Bayou to create the country's largest contiguous urban hike and bike trail system.

It's no exaggeration to say that, within the next couple of decades, the way we view our cities' rivers, harbors and canals will be radically different than it is today. "I think the river will increasingly become L.A.'s front yard," says MacAdams, an amazing speculation about an asset some residents now don't even know exists. Seeing Martin Strel crawl up the Hudson River, the new World Trade Center rising tantalizingly above him, a new view of the city -- one seen through blue-tinted goggles -- suddenly seems not just possible, but inevitable.