What was behind the Romney campaign's vicious attacks on the media this week? 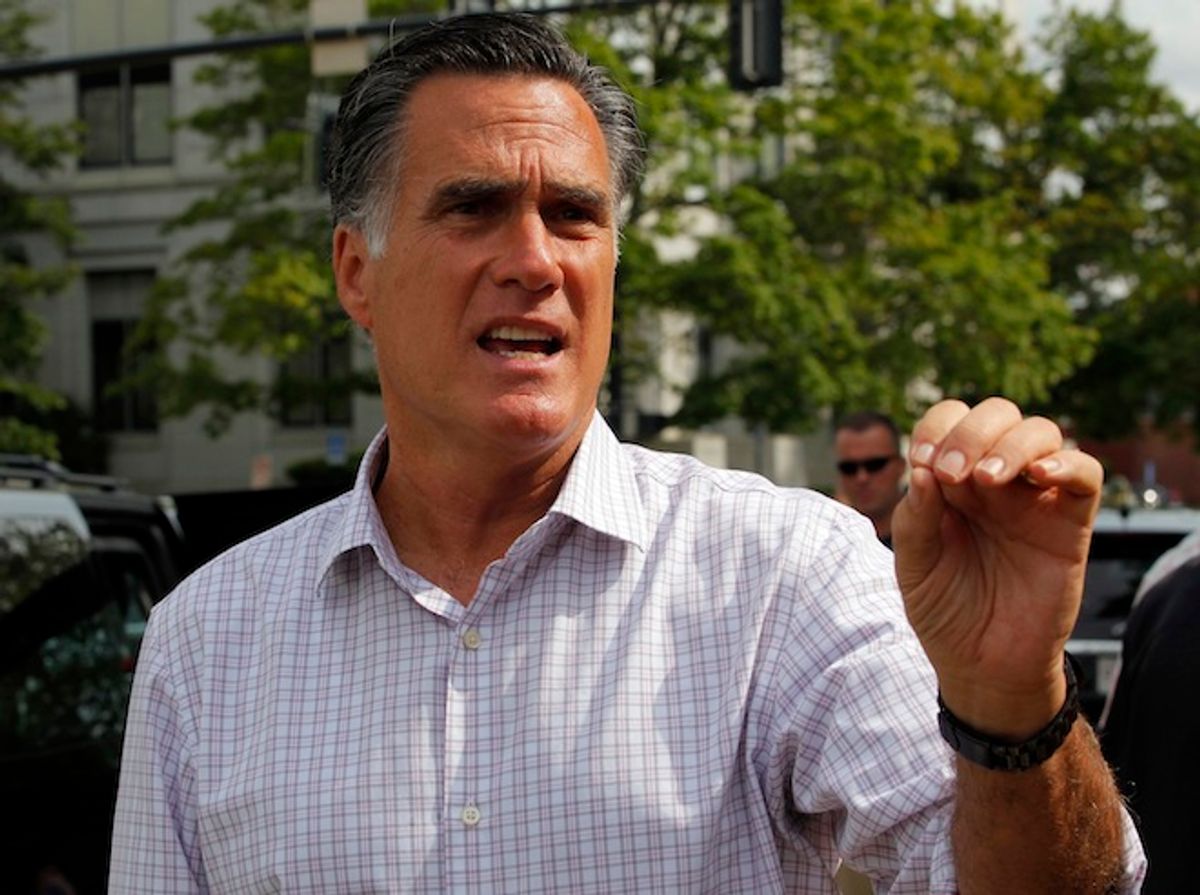 Perhaps the most astonishing development this week, at least in the chutzpah department, was the Republican attack on the news media for … well, for covering a statement on the Middle East that Mitt Romney released, and then for covering his subsequent press conference.

This was a dastardly liberal plot by the media indeed; it’s hard to imagine what Romney could have done to prevent it. I mean, other than not issuing statements slandering the administration (“sympathetic”) and then holding press conferences to drive home the point.

The question is: Why press-bashing, now? Surely not because Team Romney really believed that the press were somehow out-of-line in this particular case. My first instinct was to tie it to public opinion polls, which showed Romney still behind after Barack Obama’s convention bounce; after all, blaming the news media is what Republican losers have been doing for some 30 years now.

However, I think there’s more to it than just knee-jerk media-bashing this time.

Instead, I think it’s more closely related to the failure of the Romney campaign to develop serious policy proposals in a variety of areas, foreign policy included. Remember: Romney’s convention speech didn’t even mention the ongoing Afghanistan war, and in general it was light on policy and extremely light on foreign policy and national security.

Why is that? To be sure, part of it is that foreign policy has been one of Barack Obama’s strengths (certainly judging by the polls, at any rate), and that gives incentives for the Republicans to steer clear of it.

But it’s not just that. Poke a Republican activist outside of the Ron Paul minority, and what you’re going to find is aggressive jingoism – what Andrew Sprung referred to as a Romney Doctrine of “accelerate imperial overstretch.” For this Fox-informed portion of the party, Iraq was a triumph over a nuclear-armed Saddam Hussein, Barack Obama has spent the last three and a half years on an endless apology tour, an invasion of Iran is long past due and the United States should resume torture as soon as possible.

The problem is that most of that agenda is wildly unpopular with the majority of swing voters, who don’t even want to be in Afghanistan for the gradual draw-down Obama is planning, let alone open up new opportunities for foreign adventurism.

Now, a nominee could have taken on the party on these issues and attempted to forge a new policy, but even if Romney was interested in that (and there’s not much that suggests he’s not right there with the yahoos on this stuff), he’s spectacularly ill-suited to do so. After all, foreign policy is the one area where he doesn’t have a long trail of past policy views that were contrary to party orthodoxy. A Tim Pawlenty or a Rick Perry might have done it, if so inclined; for Romney, foreign policy is a rare area to fight suspicions that he’s more RINO than trustworthy nominee.

So, what’s left? Well, vague slogans about resolve and toughness are always fairly safe. The trick, however, is to mouth the slogans without committing to anything that reminds people of why they don’t like Republicans on foreign policy and national security these days. Well, that and an absolute, firm, solid belief that everything that Barack Obama has done should be considered 100 percent wrong.

What all this means is that when Romney’s initial comments were poorly received, he had no policy to fall back on. There’s no coherent Romney policy on Egypt, on Libya or on the Arab Spring, in general.

What could he do? Spend more time fighting the impression that he spoke rashly? That’s a loser. Retreat and acknowledge that his critics were correct? Unlikely for any candidate in a campaign; impossible for a Republican in this Tea Party era. Again, a candidate with well-developed policy proposals could fall back on those, leaving the impression that he was a candidate of considerable substance, notwithstanding the earlier intemperate remarks. That’s not going to work, however, if you don’t have anything to say on the issues.

And so the best retreat available was to attack the press. Sure, it made no sense. But Republican activists and voters love media-bashing, so they weren’t going to notice how absurd it was. The GOP-aligned media, meanwhile, could back off the uncomfortable choice of either ripping on their nominee (sort of defeats the purpose of having a partisan press) or defending a statement that basically accused the President of the United States of being anti-American. Well, maybe not uncomfortable for everyone at Fox News and conservative talk radio, but uncomfortable for enough of them that it was getting ugly for Romney. Shift the ground to the liberal press, however, and every Republican is on the same page.

Granted, that still doesn’t leave much for undecided voters, who are likely (if they’re paying attention) to find media-bashing more whiny than courageous. But you can’t have it all.