Big Brother is in your car

If you're on the road, the government likely knows where. Surveillance of drivers is increasing, and appears legal 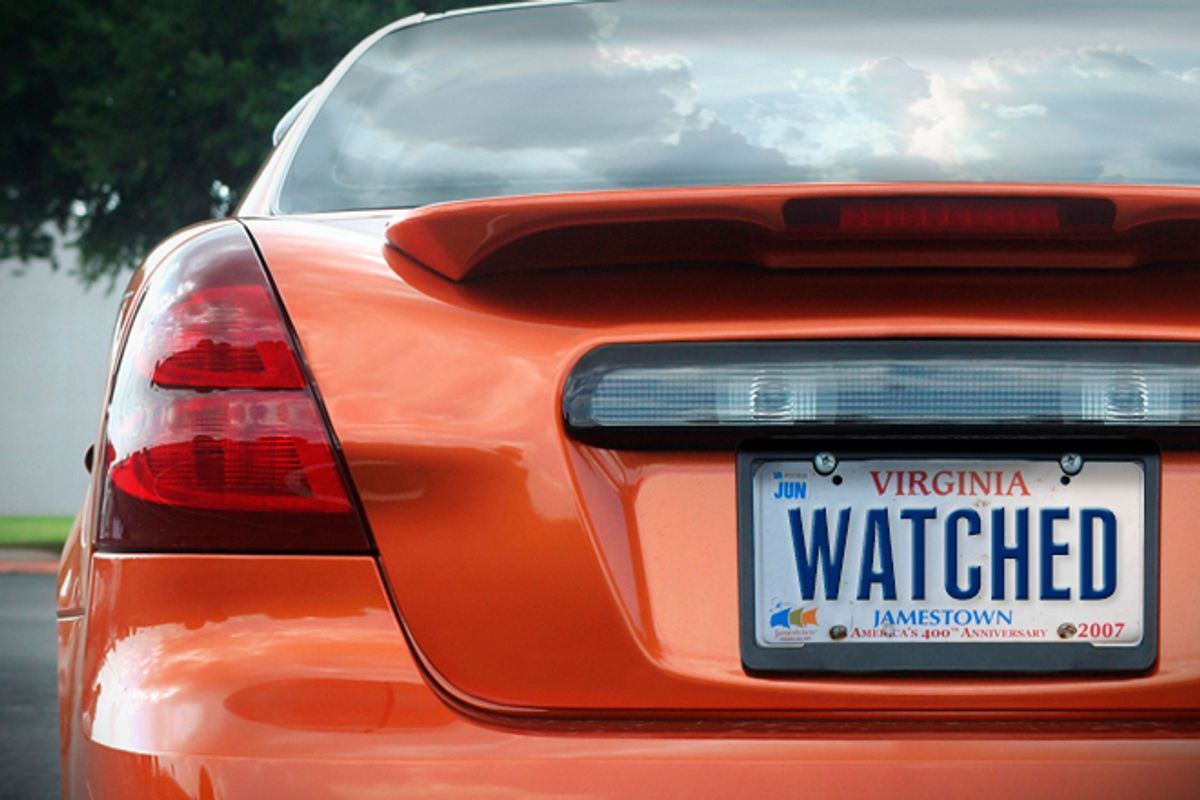 If you're traveling on public roadways in 2012, there's a very good chance you're being watched, by one government agency or another. License plate readers (LPRs) are proliferating at a rapid clip, and they’re being used by law enforcement at virtually every level of government.

Once used mostly by local cops to catch car thieves and unregistered drivers, LPR systems have morphed into what privacy activists call an increasingly pervasive network of mass surveillance. Databases all over the country maintained by local police departments – and now federal agencies too -- contain hundreds of millions of location scans, and provide a searchable record of the movements of all kinds of drivers, from murderers to pizza delivery guys, and from soccer moms to serial rapists.

The inconspicuous devices are sometimes installed at fixed points, as the DEA has been doing in several border states, but they’re most often mounted on local police cruisers, where they automatically scan and record every license plate that comes within range of their optical sensor.

When they pass an LPR-equipped police car, drivers both innocent and guilty have their whereabouts recorded and tagged with GPS coordinates, along with a color photo and a time stamp. The resulting information is often kept for years, allowing law enforcement to engage in a kind of retroactive surveillance to find out who was where, and at what time.

The data is collected and accessed without the need for warrants or probable cause, because courts have so far held that a license plate – which, after all, is posted very clearly on every driver’s bumper – can’t be considered private information. Privacy advocates think the courts may reevaluate that stance, as LPR systems become so widespread that they allow for tracking on a massive scale.

A telling exchange occurred in May at the Utah statehouse when representatives from the DEA asked lawmakers there to approve a controversial program to install LPR devices on I-15, the state’s major freeway. Utah state senator Todd Weiler wasn’t excited about the plan; he worried about the privacy implications for drivers who would have their movements recorded and locked away in a federal database for up to two years. And he was surprised to learn how powerful the automated readers are, capable of recording thousands of plates per day.

Weiler was even more startled when, a few minutes into a May hearing on the proposal, an official chimed in to say that the devices were already being used routinely by local police departments across the state.

“The sheriff kind of said, off the cuff, ‘Well, we’re already doing this all over the state with mobile devices, so it’s really not a big deal,” Weiler said in a phone interview, paraphrasing the  comments of a local sheriff. “I don’t think this was common knowledge. Certainly some people knew about it, but I didn’t, and the media didn’t. It was just revealed in such a nonchalant way.”

Weiler and others in the legislature ultimately rebuffed the DEA’s plan, preferring to keep LPR technology in local hands.

State and municipal police departments are more responsive to input on policies and procedures, Weiler explained, “and for that reason I think local control is better.”

Although Weiler and many others make a distinction between LPR use by federal and local agencies, the sharing of data between local police and the feds is starting to blur that line considerably.

Interviews with officials in several states show that local police departments are beginning to make their extensive databases available to investigators from the federal government on a routine basis. In some areas, agents from the FBI, DEA and the Immigration and Customs Enforcement agency can tap directly into local police records, leveraging the intelligence gathered by beat cops for their own investigations.

Individual local agencies often have their own policies stating when and how they share LPR data with federal authorities, making it nearly impossible to get a comprehensive view of the practice. In San Diego, for example, federal agents can tap directly into the local LPR systems with a network called SRFERS, accessing information from their desktops. A similar system is in place in Los Angeles. In the Cincinnati area, an organization called SOSINK handles federal requests on an as-needed basis, providing access to their 26 million stored scans. In New York City, documents from the state Department of Criminal Justice Services suggest that federal agents can add “vehicles of interest” to the NYPD database. The NYPD didn’t respond to repeated requests for more detail.

Representatives for the FBI and Immigration and Customs Enforcement in Southern California acknowledge that they make use of locally collected LPR information for their own investigations. Virginia Kice, a spokesperson for ICE in Los Angeles, said agents in that city “periodically query” databases collected by police, but declined to discuss any details. Officials at the headquarters for those two agencies declined to comment on the issue – or any other aspect of the technology -- but data sharing policies between federal and local law enforcement groups suggests LPR records are being shared in many more jurisdictions, according to interviews with privacy experts and law enforcement officials in several states.

DEA spokesman Rusty Payne said his agency currently has 58 LPR devices of their own, gathering infomation on roadways in four states, and plans to expand the program to major cities including Chicago and Atlanta, considered major hubs for drug trafficking. Payne said the devices are proving to a powerful tool for drug interdiction, and while he understands the concerns some people have, he questions how much privacy is possible on a public freeway.

“When you drive your car,” Payne says, “you’re not guaranteed privacy.”

In July, ACLU chapters in 38 states launched a major initiative to find out more about LPR across the country. Kade Crockford, with the group’s Massachusetts chapter, helped direct what she says is the largest coordinated public records request in the organization’s history.

The ACLU has concerns about LPR at all levels, but Crockford said the increased data sharing between local and federal agencies poses a special set of problems, partly because of the vastly superior resources agencies like the FBI have at their disposal.

“Federal agencies have more access to other kinds of other information,” Crockford said. “A piece of license plate data on its own maybe isn’t so revealing, but when you combine that with the information in the national counterterrorism databases, for example, all of this together provides a much more invasive set of technologies … Local police in many ways, not simply LPR, are being deployed as, essentially, information gatherers, and that information is in many cases fed directly to the federal government.”

The concerns of privacy advocates aren’t abstract. According to the Associated Press, when the New York City Police Department took a wrong turn and ended up spying on Muslim communities in New Jersey, LPR was one of the technologies they used.

And in the UK, where police cameras yell at you when you litter, LPR has been deployed aggressively for years. In one case, officials were forced to back off a secret plan to monitor cars entering or exiting a Muslim neighborhood.

Dale Stockton, an expert on LPR who has consulted with police agencies nationwide on how to correctly manage their systems, says common sense controls, like auditing procedures to record who accesses the data, make it unlikely that LPR is being used to invade the privacy of innocent people. He said he’s never personally seen a case where it’s been abused.

“I’ve been all over this country and I’ve seen a lot of LPR systems, and I have yet to find a single case of anybody abusing this information in the way that everyone warns about,” Stockton said. The specter of a disgruntled spouse gaining access to spy on their partner – a common nightmare scenario – simply isn’t happening, Stockton said.

There’s also no question that LPR records can be a powerful tool for solving crimes both major and minor; in Ohio, after a series of purse snatchings, the database revealed that the same car had been captured at several separate crime scenes, leading to a quick arrest, and internal presentations prepared by police officials contain accounts from anonymous ICE agents who credit locally collected LPR data for helping them make “major” seizures.

But concerns about privacy remain, and they aren’t limited to groups like the ACLU. In a 2009 report, the international Association of Chiefs of Police noted that patterns of movement recorded by LPR could “serve as a gateway to other, more personally identifying information” and “locations from which the LPR data was collected may be considered potentially sensitive,” listing examples like churches or abortion clinics. The mere presence of a license plate scan in such sensitive locations is potentially revealing, the report acknowledged.

Crockford said she expects that most ACLU chapters will have responses from various agencies by the end of this year, and the materials turned over should shed some light on how freely information is shared between local and federal agencies. It’s a question that needs answering, she said.

“The federal government has access to lots of other tools, as well as investigatory powers that state and local prosecutors don’t possess,” Crockford said. “Right off the bat, it’s a different ball game.”