Way ahead of schedule, the finger-pointing has already begun in Romneyland 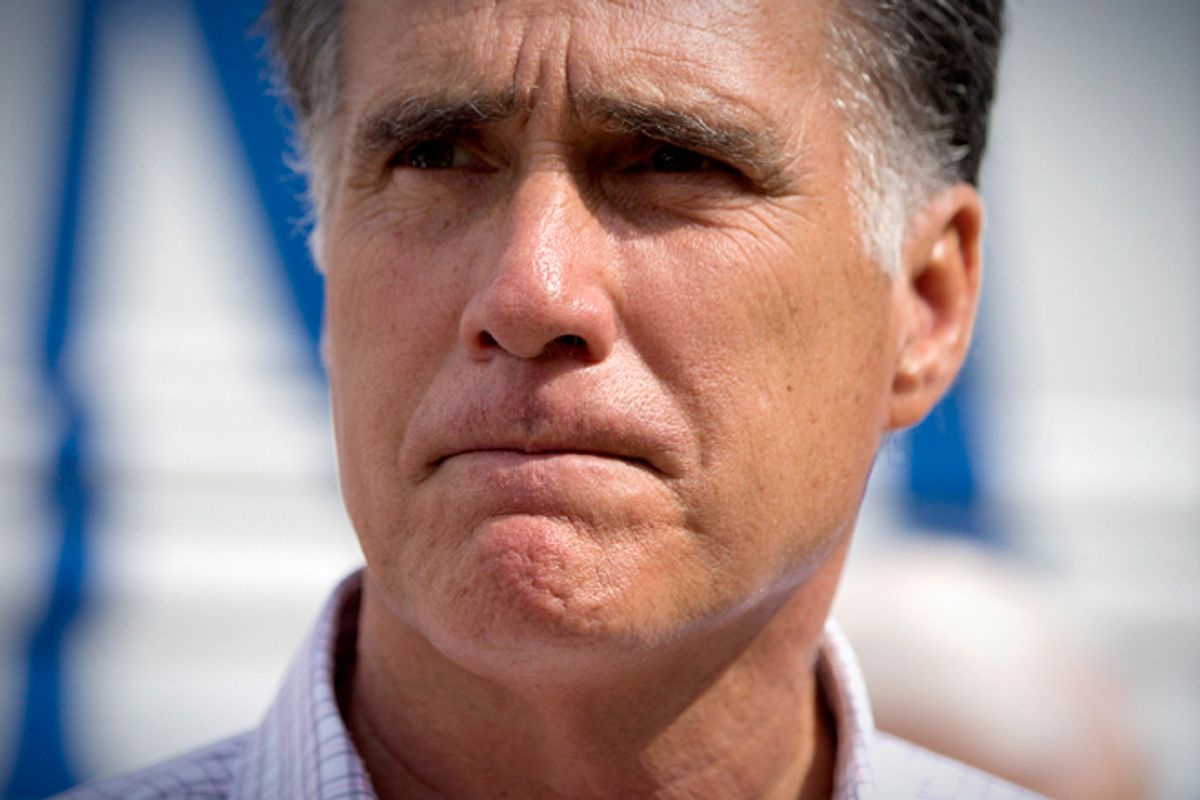 The Romney campaign, it seems fair to conclude, is in panic mode and maybe already convinced they’ve lost. Today brings stories in the New York Times, BuzzFeed and Politico about the campaign “abruptly switching strategy” and making “a painful course correction” -- never a good sign when you’re just 50 days away from Election Day.

The campaign has good reason to panic, as a growing gap in polls have led most pundits to conclude the race is all but over. Even the usually faithful Erick Erickson lamented today, “Contra Dick Morris, Mitt Romney is not winning this election.” The Republican National Convention gave the Romney campaign one of its final shots at changing direction, but the candidate was upstaged by an empty chair. Now, the only thing that can save Romney is a calamitous, unforeseen turn of events or an Obama misstep, but when both happened last week -- Obama flubbed the status of U.S. relations with Egypt as the situation in the Middle East deteriorated -- Romney had already so discredited himself on the issue that his campaign didn’t even attempt to exploit the blunder.

Now desperate for a change, the campaign is making a big one. Since Romney locked up the nomination in the spring, his guiding principle has been to focus on how bad Obama is, and to talk about nothing but the economy. (In a bit of unfortunate timing, an adviser called foreign policy a “shiny object” distraction just days before the Middle East protests broke out.) But now the campaign is throwing all that out the window.

“No one in Boston thinks this can only be about the economy anymore ... we have to bring more to the table,” a top aide told BuzzFeed. Romney will now present his own positive vision and offer more detailed policy prescriptions where he had been vague in the past, and make a broader push “on every front,” beyond just the economy, as chief strategist Stuart Stevens told Politico.

If you think suddenly trying to advance on “every front” with less than two months to go may be a sign of an unhealthy campaign, you’re not alone. In fact, you’d have lots of company from within the Romney campaign, according to a separate Politico story co-authored by its two standard-bearers, Mike Allen and Jim Vandehei. That the story even exists is the clearest sign that not only the pundits, but also many in Team Romney, seem to think they’ve already lost. The story, a detailed exposition of infighting and finger-pointing within the campaign -- most of it directed at Stevens -- is the kind of thing you expect to read after Romney loses and aides try to pass the blame and save themselves. It features phrases like “utterly failed,” includes a not-so-subtle implication that Stevens has become psychologically unhinged, with candid quotes about him like this, from an unnamed staffer: “The campaign is filled with people who spend a lot of their time either avoiding him or resisting him.”

To understand why the story is such a bad harbinger for the campaign, you need to understand how political campaigns work at the top levels. Unlike the Summer Campy, Kool-aid drinking junior staffers, the top brass of campaigns is mostly made up of professional political consultants who move from campaign to campaign over their career and whose reputations, and thus employability, rise and fall with the very public success or failings of the candidates for whom they work. When a candidate starts to lose, there’s a point where the workaday operatives stop believing in their boss and start to worry more about their own future employment.

In 2008, this point came sometime in late October as McCain advisers began leaking sharply negative comments about VP nominee Sarah Palin to the press, including Politico’s Mike Allen. Palin was a “whack job,” Allen quoted a McCain aide saying on Oct. 28, while CNN quoted another aide calling Palin a “diva.” Soon, as it became inevitable that Obama would likely win, the McCain campaign became a a black market of Palin slams, as advisers unloaded on the vice-presidential nominee, hoping to scapegoat her for McCain’s loss. That was a week before the election. Now it seems Stu Stevens is the new Sarah Palin, and we’re ahead of schedule on sacrificial bloodletting.