By emphasizing class size, the showdown with Rahm Emanuel has redefined the education debate 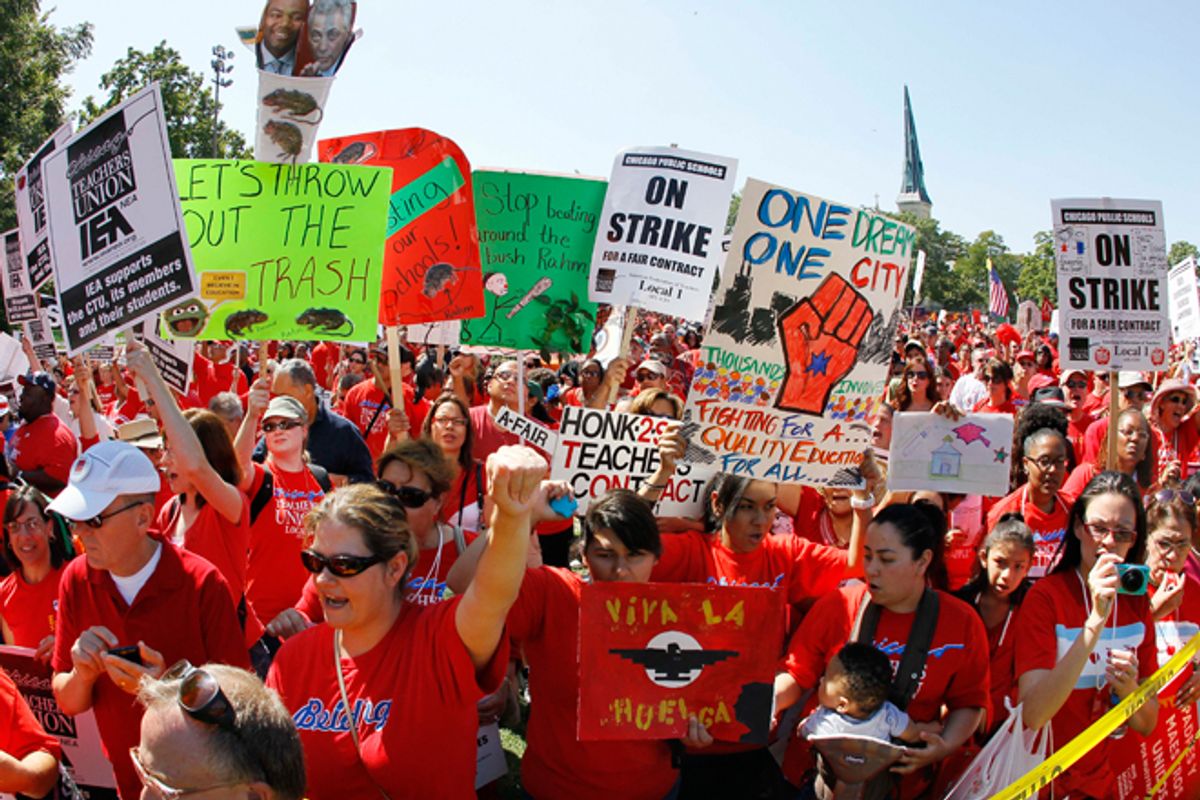 Seven days in, Chicago teachers are still on strike. Yesterday, elected delegates of the Chicago Teachers Union voted not to end the strike, opting instead to reconvene Tuesday after discussing a proposed contract deal with CTU’s broader membership. Soon after their meeting, Mayor Rahm Emanuel announced that he’ll seek a legal injunction declaring the strike illegal and forcing the teachers back to work. So the next few days will bring either a resolution or a major escalation of Chicago’s immediate crisis, which pits a famously strong-willed mayor against a local union intent on defying the “education reform” consensus.

This much is already clear: At a moment when teachers unions are everywhere on the defensive – from legislatures, to bargaining table to Hollywood – the teachers have wrung major concessions from the mayor. In the process, they revealed – and began to reshape – divisions in the education debate, in the Democratic Party and within the labor movement itself.

“A lot of us look at the school that Mayor Emanuel sends his children to as an example,” said striking history and social studies teacher Xian Barrett. He was referring to a unionized private school, tied to the University of Chicago, which boasts a broad curriculum, smaller classes and ample resources. Barrett, a 2009 Department of Education Teaching Ambassador Fellow, said, “We want that for our students, too. And we think they deserve it as much as the mayor’s children deserve it.” (The mayor’s office did not respond to a request for comment.)

By law, the teachers could only strike over compensation. But the strike has been about much more. It's a clash between competing visions for how to improve schools, which in Chicago have come into unusually sharp relief. Among the bones of contention: The role of testing in evaluations, the strength of job security for teachers and the number of kids in a class. In a Sunday morning press release, CTU described a proposed settlement with major improvements over what the city was offering a week ago. But in interviews last night, CTU activists said it’s not clear whether it will be good enough for members to accept. “If we were only fighting for money, then we certainly came out more on the positive than the negative,” social studies teacher Rivanna Jihan said last night. “But in terms of the other stuff, it’s a mixed bag.”

Chicago was long destined for a showdown. In 2010, the members of the Chicago Teachers Union (CTU) voted out their incumbent officers in favor a slate from the Caucus of Rank-and-File Educators (CORE), a group promising more aggressive grassroots organizing, deeper partnerships with the community, and fewer concessions. The next year, the city voted in Rahm Emanuel.

The month after Emanuel took office, the national reform group Stand For Children scored a major victory when Illinois’ legislature passed SB 7, which weakened seniority and job security, and narrowed the scope of collective bargaining. The law also raised the showing necessary for CTU to authorize a strike, requiring that three-quarters of the membership show support. Jonah Edelman, Stand For Children’s CEO, told a crowd at the Aspen Ideas Festival that the union “will never be able to muster the 75 percent threshold necessary to strike.” But in a June strike vote, CTU mustered a reported 90 percent. Last week, they followed through on the threat.

Union opponent Rebeca Nieves Huffman, the state director for Democrats for Education Reform, told Salon last week that the strike was “clearly a referendum on the agenda of our mayor…the eyes of the country are on Chicago right now to see what’s going to happen.”

Interviewed during the strike, national critics of Emanuel-style reform described a chance to reshape a debate in which they’ve long been on the defensive. “They’re the ones that have been able to define it as a civil rights issue, or as an issue to get poor kids better education,” said former Connecticut state legislator Jonathan Pelto, who’s consulted for unions. “And our side, the unions and public education advocates, have had a very difficult time – one might even say, have failed completely – to change the narrative.” A strike in which teachers emphasize issues like class size, said Pelto, “actually provides a perfect opportunity to educate the Democratic base about what’s going on…the good guys are the ones that are out on the picket line working to defend the profession.”

“What happens in Chicago will tell us, really, what might happen in other major cities,” said John Matthews, the executive director of Madison Teachers Inc., the local union whose walkout helped spark last year’s Wisconsin uprising. “Including Madison, frankly.”

While drawing national attention to teachers’ grievances, the strike has cast individual teachers as protagonists. Much of the education debate reflects the premise baldly articulated by Jonathan Alter in “Waiting For Superman”: “Teachers are great, a national treasure. Teachers’ unions are, generally speaking, a menace and an impediment to reform.” That film’s fictionalized counterpart, this month’s “Won’t Back Down,” takes the same line – as did GOP keynoter and New Jersey governor Chris Christie. While it’s possible to believe teachers are a “national treasure” but are wrong about their working conditions, too often the media storyline implies that union officials and the worst teachers are the only ones objecting to charter-ization. But last week, Chicago’s teachers were very visibly voting with their feet: According to Jihan, a CTU activist, union sign-ins suggest that each day 90 percent of teachers were on the picket line.

They’ve been joined on those picket lines by students, and by parents. A GOP-leaning polling group found two-thirds support for the strikers among Chicago’s public school parents, and majority support among the city’s voters – despite the condemnations issued by left-of-center pundits and editorial boards on the kids’ behalf.

That support reflects the breadth and depth of CTU’s organizing with parents and teachers going back years. Teachers unions sometimes earn deserved criticism for emphasizing a narrow ethic of professionalism rather than a broad ethic of solidarity. In Illinois, opponents successfully pushed laws to make it harder for teachers to bargain or strike over issues beyond salary, then framed teachers as greedy. But CTU has been relentless in making common cause with low-wage union members and public school parents, and framing its struggle as one about the conditions of teaching and learning. “The best community organizing tool we have,” said Jihan, “is to strike for working conditions, because that’s the best tie that we have to the students.”

That hasn’t always been CTU’s approach. In the lead-up to the 2010 union elections, CTU’s then-leaders mounted blistering attacks on the insurgent CORE caucus. Barrett, a founding CORE member, said the incumbents put out flyers warning that if CORE won, “the power of the union is handed off to the community and parent groups.” CORE, said Barrett, countered that working closely with parent groups “will build more power…and that’s something that has been vindicated in how everything has played out.”

“Only in Chicago do you have a teacher’s union local strong enough, and independent enough of the national union, to do something like this,” said Mark Naison, who directs the urban studies program at Fordham University. “If it encourages other locals to strike,” former assistant secretary of education Diane Ravitch said over e-mail, “it could have a huge impact.”

In an e-mailed statement last week, American Federation of Teachers president Randi Weingarten said the national union and its members “stand firmly with the CTU, and we will support its members in their efforts to secure a fair contract that will enable them to give their students the best opportunities.” But AFT has often taken a different tone on education reform issues than its more confrontational affiliate CTU. In a June interview with Salon, Weingarten touted a statewide compromise in Connecticut (backed by both national unions) which included school takeovers with limited collective bargaining, and a union contract for New Haven, Connecticut which give management greater discretion in firing teachers.

Barrett said the Chicago strike’s example could inspire other teachers to take their unions in a different direction: “Whether or not the national unions, with their current leadership, will choose to embrace a grassroots, bottom-up method of union organizing, or choose to it resist it -- and, in my opinion, face serious challenge – remains to be seen.” At a 2009 event honoring former Chicago schools CEO and current Obama education secretary Arne Duncan, CORE members were outside protesting while CTU’s then-president was inside attending.

That reception reveals a tension within the labor movement, and another within the Democratic Party, whose members are often the ones pushing hard bargaining – or no bargaining – with teachers. Emanuel just stepped down from co-chairing Obama’s re-election campaign so he could help raise cash for a pro-Obama super PAC. Hours into the strike, Mitt Romney claimed that Obama had sided with the union (his evidence: a speech Joe Biden gave to a different teacher’s union last year). Asked about Romney’s claim, Emanuel praised Obama for passing Race to the Top, which incentivized reform laws like Illinois’.

Naison called Emanuel’s policy Race to the Top “on steroids,” and said the strike “has pulled the covers off immense teacher discontent with the Obama Administration.” Asked repeatedly about the strike by reporters, White House press secretary Jay Carney said that the president “has not expressed any opinion or made any assessment about this particular incident.”

With an election weeks away, Obama no doubt counts himself among the Chicagoans eager to see an end to the strike. But whether or not the strike ends tomorrow night, the intra-party tensions it’s stoked are far from settled. By highlighting rank-and-file teachers marching with parents for alternative reforms, and by offering inspiration to union members seeking a different form of unionism, the strike has shifted the terrain for battles still to come.

“We’ll see what the democratic process brings us Tuesday,” said Barrett. “But either way, whether we’re back at work on Wednesday or not, we’ve got a lot of fighting ahead of us.”