Forget "The Social Network." The director's best work is "The Game," and the Michael Douglas film still resonates 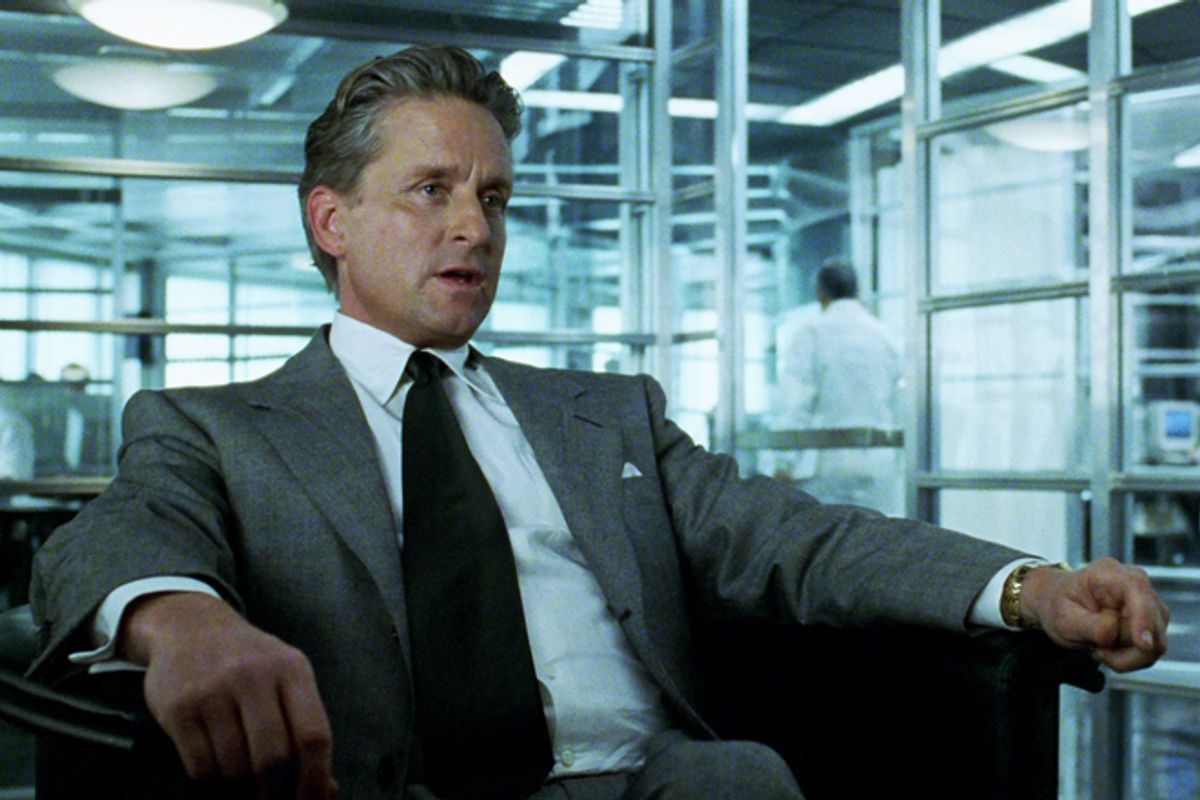 Michael Douglas in "The Game"
--

Contrary to both popular and film-geek opinion, superstar director David Fincher's most significant work is neither "The Social Network" nor "Fight Club." It is probably the least remembered production in his catalog -- 1997's "The Game."

As that unacceptably underappreciated magnum opus turns 15 this month, I've become obsessed with it all over again -- and not just because it seems to be airing at any given moment somewhere in the vast cable rerun-o-sphere. No, I've been lately fixated on Fincher's forgotten tale because, after a decade and a half of boom-bust economics, terrorist attacks, wars, money-dominated politics, partisan polarization and general insanity, the film has become one of the most prescient parables of this historical moment. It's a cultural spotlight that almost perfectly illuminates the taproot of America's moral and spiritual crises.

A quintessential B-movie in the best sense of that imprimatur, "The Game's" main character is a cutthroat investment banker played by Michael Douglas, the same actor who gave moviegoers the more-trenchant-than-ever Gordon Gekko. Thanks to that auspicious casting call, the film seems in retrospect like a thinly veiled sequel to Oliver Stone's 1987 classic "Wall Street," with Bluestar Airlines renamed Baer-Grant Publishing; Gekko renamed Nicholas Van Orton; and a pitiable family back story that rationalizes the character's plunge into pathological greed.

Like every corporate scoundrel dragged before Congress, Van Orton describes his soul-pulverizing work in anodyne terms. "I move money from one place to another," he tells one acquaintance. Contrary to such bromides, though, he is as recognizable to us as today's pampered Wall Street executives who exist in a hermetically sealed bubble of privilege and power. In Fincher's caricature of this timeless brute, Van Orton's $2,000 loafers almost never touch the macadam. Indeed, as a CNBC soundtrack thrums in the background, he floats from his manse, to his BMW, to his towering Van Orton Building to the scotch-and-cigar city club -- all while orchestrating hostile takeovers via his cellphone.

There is, however, a key difference between Van Orton and today's typical Master of the Universe. In Fincher's fantasy world, the protagonist happens to have a capricious brother who hires a company called Consumer Recreation Services (CRS) to try to end his bloodless sociopathy and change him into a compassionate human -- specifically by exposing him to the cruelties of real life.

Over the course of the ensuing "game," CRS first berates Van Orton as "a bloated millionaire fat cat" then constructs elaborate illusions to make him believe that a faceless multinational corporation (probably like the one he runs) has successively stolen his identity, pilfered his savings and left him for dead in a Mexican cemetery. The experience, replete with a harrowing taxi ride to the bottom of the San Francisco Bay, convinces Van Orton that he is facing both financial and spiritual destruction, eventually prompting him to try (unsuccessfully) to commit suicide. Through CRS' perverse exposure therapy, he is ultimately transformed from a Mitt Romney caricature who declares that the only virtue in life is whether a share of stock is up, into a bleeding heart who decries losses to workers' pension plans and says, "I don't care about money."

Part of the enjoyment of "The Game" is its mishmash of famous story lines. As Fincher once said, it is the tale of a "fashionable, good-looking Scrooge, lured into a 'Mission: Impossible' situation with a steroid shot in the thigh from 'The Sting.'"

Another appeal of the film is its anchoring in a schadenfreude that is particularly powerful in this new Gilded Age. In the vernacular of Occupy Wall Street, you get to watch a 1 percenter crack under the weight of 99-percent problems -- a process Fincher deliberately suffuses with class resentment. (Van Orton, for example, is so insulated from regular life that he essentially has a nervous breakdown at the prospect of going through the standard border-crossing procedure so many immigrants encounter.)

But while echoing familiar tropes is a formula for short-term success, and letting an audience enjoy an aristocrat's demise can certainly get a flick as far as a comedy like "Trading Places," those tricks cannot take a film into the metaphysical depths plumbed by "The Game." What takes Fincher's picture into that rare abyss is its prescient critique of a society that was -- and is -- increasingly separating human beings from painful realities. Somehow back in the 1990s, at the peak of the carefree go-go economy, "The Game" was prophetically positing that such separation was making villains of us all -- and there is ample evidence that's not only true, but the biggest problem glaring at us in the mirror today.

A decade and a half after "The Game" hit theaters, the separation it laments is now the hallmark of our society, suffusing our culture with the aloof ethos of Marie Antoinette.

In our political arena, the wealthy can applaud calls for austerity with "let them eat cake" jeremiads, knowing that as the rich and poor live farther apart than ever, many will never have to see the human cost of those policies. Likewise, many professional politicians can demand draconian cuts to public school budgets, knowing their own kids are in private academies. Meanwhile in military affairs, drone warfare, all-volunteer armed forces and Pentagon-censored media encourage most flag-waving Americans to cheer on wars with full knowledge that they will never have to fight them or see the conflicts' blood-and-guts consequences.

In economic debates, it is much the same. Hedge funders in lower Manhattan and professional ideologues in Washington can bleat about the virtues of "creative destruction," knowing, like Van Orton, that financial instruments physically separate the destroyer from the destroyed.

Even in our personal lives, alienation dominates. Shoppers today can go online and purchase cheap products manufactured abroad, never having to work in or even see a foreign sweatshop. Carnivores can tout the virtues of meat consumption never having to look inside a slaughterhouse or behold the environmental destruction that comes with such water- and crop-intensive eating. Drivers can buy gas-guzzlers and homebuyers can purchase energy-sucking McMansions knowing that the worst effects of climate change will likely hit after they are dead. And, of course, Facebookers, Twitterers and emailers can spew hateful messages to anyone on the Internet, assured they will probably never have to physically encounter their targets.

Not surprisingly, the anomie bred by such distancing is pervasive.

On Wall Street, where complex securities insulate traders from their clients, we see it in a recent Der Spiegel report on a study finding that "stockbrokers' behavior is more reckless and manipulative than that of psychopaths." Among the gated community crowd in general, we see it in a University of California-Berkeley study that finds wealthy people have a higher propensity than others "to lie and cheat when gambling or negotiating; cut people off when driving, and endorse unethical behavior in the workplace." On the Internet, where anonymity rules, the downsides of alienation are evinced in both the rise of cyberbullying and in a Western Illinois University study showing a link between Facebook use and "socially disruptive" behavior. And of course, we see the monstrous effects of alienation at political conventions when the biggest applause lines tend to be for saber-rattling declarations about war and state-sponsored violence.

These sociopathies are what "The Game" is really about. Simmering beneath its pulpy madness, its stagy twists, its maudlin music and its disbelief-suspending plot is a prophetic allegory begging us to realize that alienation can turn us into unfeeling cretins And not just any old troglodytes, mind you, but the kind who tacitly or explicitly support antisocial behavior, radical views and horrific acts that we might never tolerate if we had to personally experience their ramifications.

No doubt, you may have trouble remembering "The Game" ever being in theaters. Box-office-wise, while it turned a nice profit, it was hardly a major blockbuster. And if on the off chance you do have any original recollections of the film, they likely bleed together with the myriad replicas of the archetypal end-twister, 1995's "The Usual Suspects."

Yet out of all those derivatives during the late-Clinton era -- from "The Sixth Sense" to "Seven" -- "The Game" is the enduring classic, standing out not only for its abiding story, but also for its dim ray of hope during these seeming end times.

Yes, amid its darkness, Fincher's film proffers an alluring solution: Human connection, it suggests, will inherently evoke enlightenment and morality, even among those previously insulated in a lawyer-protected cocoon of luxury sedans, mahogany-paneled offices and cutthroat financial transactions.

Living in the real world, though, we don't have a CRS to artificially create the sensation of such connection. Despite 21st century technology and subterfuge, no entity can (yet) manufacture illusions that make more of us feel the effects of poverty, battlefield casualty or sweatshop slavery, and therefore make us less willing to ignore those ills at the ballot box, at the political rally or at the Wal-Mart. Virtual reality has certainly come far - but not that far.

That said, we do still have things like the Peace Corps and the public school system, town hall meetings and community gatherings. We also see congressional proposals for mandated national service and military conscription. They are certainly not as exciting as "The Game" nor do they lend themselves to cinematic pyrotechnics. But they are institutions and initiatives rooted in the "The Game's" premise that when we are brought out of our bunkers and into a common experience, we can regain our humanity and our empathy.

That idea is both radical and aspirational, for sure - but no more crazy than the populist notions that undergird the most basic assumptions about human nature (walk in another person's shoes and you'll be more likely to understand her) and about America's democratic dream (a government truly of the people will be a government genuinely for the people).

Fifteen years after Fincher wrapped those core ideals in a Hollywood thriller, we can see the monster and it is Nicholas Van Orton -- who, alas, is too many of us in this age of alienation. It is a sad reality, but it doesn't have to be ours forever. To know that truth is to do what I do whenever I happen upon "The Game" while flipping channels. Stop, drop everything and watch as Van Orton's resurrection reminds us that even in these dark days, there is still a more human way forward.