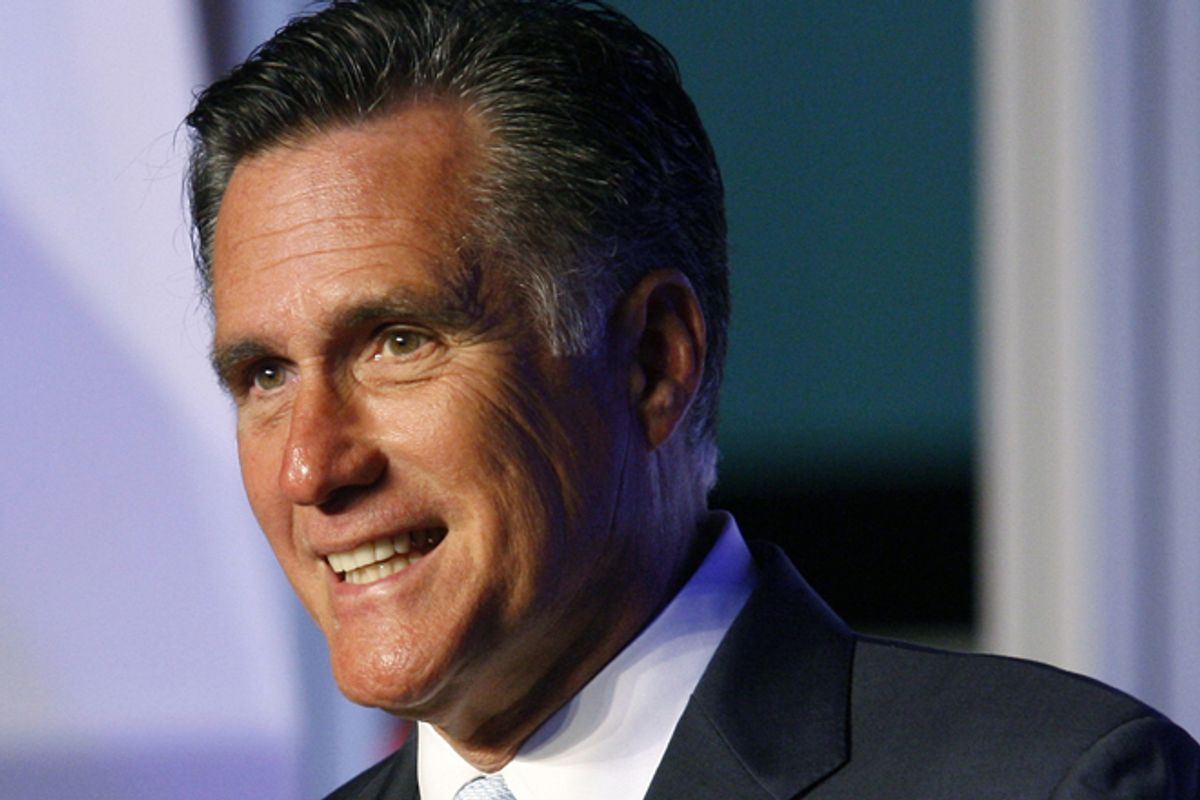 Yes, we know that Mitt Romney thinks almost half the nation is made up of welfare-grubbing leeches unwilling to separate their maws from the teat of Big Government. But what's honestly more remarkable to me (because the "too many non-rich Americans don't pay taxes" line is an ancient one, and one that the Wall Street Journal editorial page has been repeating since 2002) is that Mitt Romney actually doesn't understand, apparently, that he is a child of privilege.

Being born in America is certainly a much bigger leg up than being born in, say, Haiti. But being born in America is a much better gift, on the whole, if you're born to well-educated parents with a relatively large household income, as Mitt Romney was. As economic inequity has risen, social mobility has declined relative to much of the rest of the industrialized world. In other words, being born in Denmark, Australia, Norway, Finland, Canada, Sweden, Germany, Spain or France would actually have been a better gift. (Especially Denmark.) Of course, that represents a decline since the days of mass unionization and liberal activist government -- being born American in the first half of the 20th century really was a nice deal, as long as you survived the wars.

But the important thing is that Romney considers himself wholly a self-made man. He Built That. Hard work and his own merit are what made him a success, and, by implication, made 47 percent of the population useless mooching parasites.

This is very silly and if Romney actually believes this about himself he's much more delusional than I thought he was.

It's technically true that Romney "inherited nothing" when his father died, as various conservatives shouted at me on Twitter last night. He "inherited nothing" because by the time his father died, in 1995, Mitt Romney was already a very wealthy man, thanks in large part to the many advantages he enjoyed as the son of a prominent politician and corporate executive. Romney could afford, at that point in his life, to give away his father's estate. (To charities and, notably, to his children -- both common means of avoiding the brunt of the estate tax.) He gave his father's estate away because he'd already enjoyed its many advantages.

Mitt Romney attended maybe the most prestigious private high school in the Midwestern United States. He was not a scholarship student. His father was an automotive company executive and eventually the governor of Michigan, and, by the early 1960s, a millionaire. (And one who had legitimately started from practically nothing.)

If a theoretical non-rich Mitt Romney had gone to college (57 percent of male high school graduates enrolled in college in 1965), a prestigious private school like Stanford might've been out of reach. When Mitt Romney attended Stanford, tuition was $1,575 a year, which is more than $11,000 in today's dollars, and this was just at the cusp of the age of financial aid. (If Romney were black, going to college in 1965 would've been significantly less likely.) And if theoretical working-class Romney had managed to bootstrap himself into a good school, it would've almost certainly been with the assistance of the federal government, in the form of the National Defense Education Act or the Higher Education Act of 1965 (the year Romney enrolled in Stanford).

Romney spent only a year at Stanford, and finished his degree at the less prestigious Brigham Young, at which point he was accepted into Harvard Law and then the very exclusive joint law/business degree program. When that happened, his father, by the way, was a cabinet secretary. I'm just saying.

And of course while Romney was getting his degree, he didn't have to do anything rash like "go into debt" or "work," because, as Ann Romney helpfully explained in 1994, the young couple survived by selling stock Romney received from his father. At BYU: "Neither one of us had a job, because Mitt had enough of an investment from stock that we could sell off a little at a time." At Harvard, Ann was able to stay home with their children despite neither parent having a job, because "we had no income except the stock we were chipping away at."

So, yes, self-made man, no inheritance, only silver spoon was the good old red, white and blue. It's understandable that rich men enjoy the delusion that their own inherent virtue and work ethic are solely responsible for their success, but in men like Mitt Romney, it's a particularly bizarre delusion.