Despite what the pundits say, Romney's 47 percent remarks could shore up support where it matters most 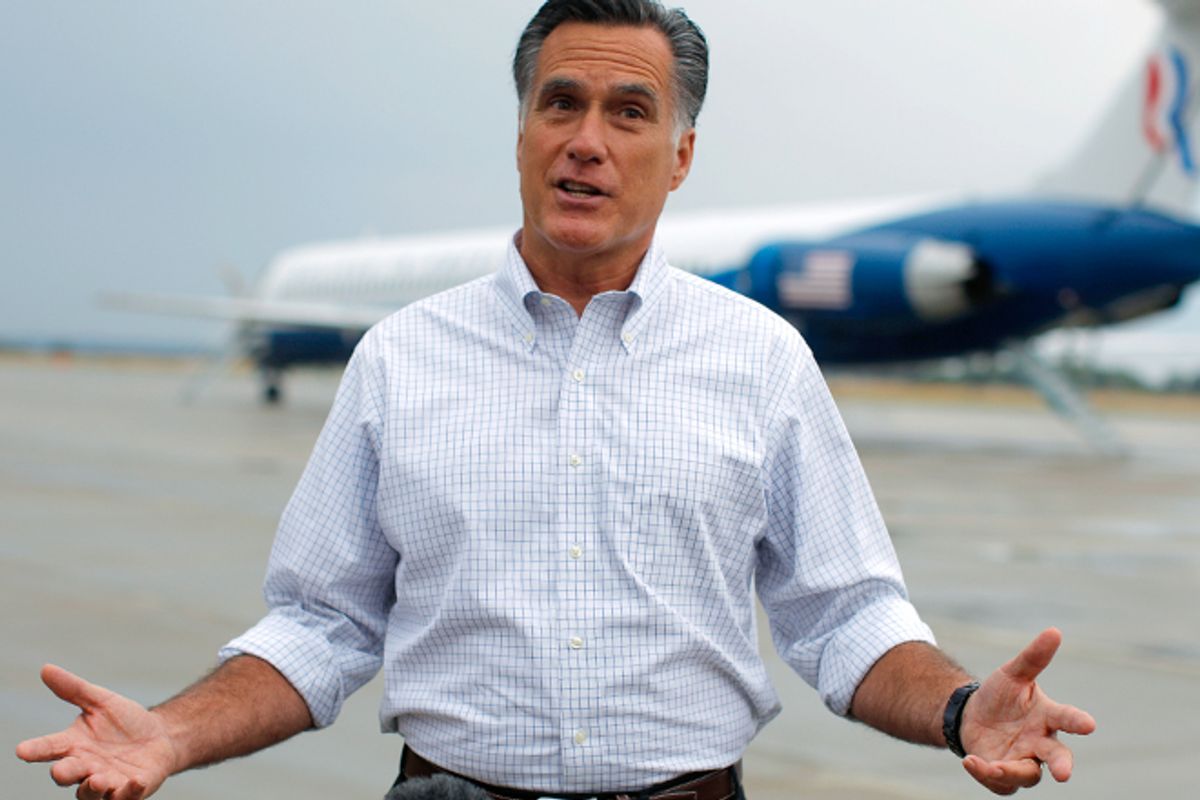 If you watched TV, read a newspaper, listened to the radio or consumed pretty much any other news in the past 24 hours, you know that Mitt Romney’s comments about 47 percent of Americans mooching off the government dole are incredibly toxic and may have already cost him the presidency.

But the rumors of Romney’s demise may be greatly exaggerated, as there’s plenty of reason to believe the 47 percent nonsense can actually help him. It may sound far-fetched, and many voters will undeniably be turned off by his statements, but many others will likely embrace them. The notion that the comments will be entirely harmful is based on the assumption that Romney is focusing on winning over moderate independent voters. But Boston has apparently abandoned that approach in the dramatic strategy change the campaign rolled out this week (off to a great start!). Now, the thinking in Romneyland is, “This is going to be a base election, and we need them to come out to vote.”

Assuming the campaign is correct in believing that appealing to the GOP base over independents is the better strategy (they presumably have lots of internal data to support this conclusion), then it’s easy to see how Romney’s comments could actually be an asset.

Romney didn’t invent the 47 percent thing; it’s been a hugely popular and resonant meme on the right for a year. RedState editor Erick Erickson started the “We are the 53 percent” campaign as a response to Occupy Wall Street in October of last year and soon Fox News, Rush Limbaugh and virtually every other conservative with a camera, microphone or blog got onboard.

"Forty-seven percent of the population is content to be slovenly, lazy takers,” Limbaugh told his 15 million listeners almost a year ago. And conservatives continue to embrace the sentiment today. “I would love for that to be a message for anyone on the stump,” Fox News host Brian Kilmeade said this morning.

Many pundits have pointed out that much of the 47 percent Romney maligned, if not most, are actually Republican voters, such as retired whites who collect Social Security and don’t have other income. But Harvard political scientist Ryan Enos said these people probably won’t be offended by Romney’s comments because Americans’ perceptions of who takes social welfare are often unrelated to reality. “I think there is a good possibility it won’t hurt him and may even help, insofar as these things can help (which probably isn’t very much),” Enos said.

“Insofar as there are undecideds out there, there is some reason to believe that they will not hear this and think Romney is talking about them or even people like them. It has to do with our tendency to have a positive self-image. There are very few people out there that hear the word ‘moocher’ and think it is about them.  We’ve all seen this, right?  Your really lazy cousin – he doesn’t think he’s lazy,” Enos explained.

Because of what he called “motivated reasoning,” Romney voters will assume Romney was speaking of Obama voters while Obama voters will assume he’s talking about them. “So, there might be a group of people out there that are undecided and hear what Romney says and, yes, it is somewhat appealing –- he called them thoughtful and they don’t think of themselves as part of the moocher class,” he added. Still, Enos said he doesn’t think the comments will have much effect either way this late in the election, when voters have already made up their minds.

Meanwhile, conservatives are more likely to hold negative views of welfare than liberals, and are less likely to realize that they use social welfare programs, according to survey research conducted by Suzanne Mettler at Cornell. “If you have two people, and one is a liberal and one is a conservative, and they've used the same number of direct social policies, the liberal is much more likely to say, ‘Yes, I've used a government social program.’ And the conservative is more likely to say, ‘No,’” she said. In reality, Democrats tend to take slightly more government social benefits than Republicans, but by a small degree. “That suggests that maybe you’re right, in a sense, that this will in some ways play to the Republican base,” she explained.

There may also be something to gain for Romney in taking on the mantle of a tough politician who is willing to voice so-called hard truths that others avoid. New Jersey Gov. Chris Christie has made a national reputation out of talking tough and conservatives have been hounding Romney for months to be stronger and more assertive in his rhetoric. In so much as these same conservatives believe in the substance of what Romney said -- and we have every reason to believe they do -- then they’ll probably appreciate the style too.

Indeed, Romney has so far stuck by his statements entirely, suggesting he doesn't perceive them to be nearly as toxic as the analysts of the Acela Corridor do.  And while polite conservative pundits like David Brooks and Republican Senate candidates running in blue states have promptly disowned Romney, stauncher conservatives have held their fire or even offered praise. Limbaugh called the moment a "golden opportunity” for Romney and Fox News is right there with him.

If Romney has truly given up on winning over independents in favor of turning out his base, then it's hard to see why they're wrong. While the Romney camp still would have preferred that the video had never been released, they may nonetheless see a silver lining where everyone else sees only gray.