As Mideast protests simmer, the election could turn on how the candidates handle a messy crisis 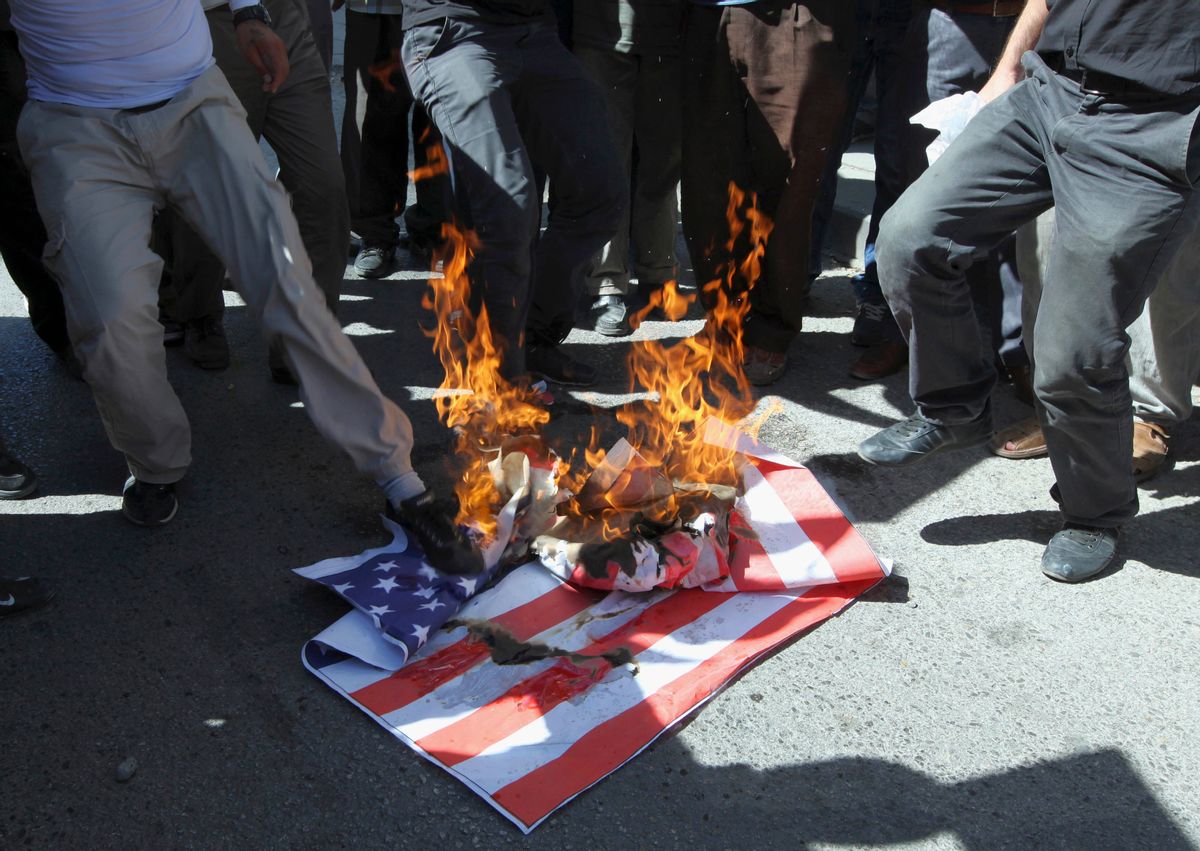 A mock U. S. flag set on fire by a group of about 50 angry Islamists near the U.S. embassy in Ankara, Turkey. (AP/Burhan Ozbilici)
--

BUZZARDS BAY, Mass. — Be careful what you wish for. Just a few short months ago, foreign policy junkies like myself were ruing the almost complete absence of an international focus in the presidential campaign.

With a domestic economy in ruins and an electorate afraid for their jobs, their homes, and their health care, there seemed to be little energy left to ponder problems in distant lands.

More than one pundit has joked that Romney’s foreign policy experience ends at the offshore banks where he parks his money.

“Mitt has so little economic patriotism that even his money needs a passport,” quipped former Ohio Gov. Ted Strickland, speaking at the Democratic National Convention in Charlotte, NC.

Besides, there was little actual daylight between the positions of incumbent President Barack Obama and his rival on the main issues: While Romney tried his best to find fault with Obama’s plan to withdraw most American combat troops from Afghanistan by 2014, the truth is that there was simply no domestic appetite for prolonged debate over an endless and seemingly fruitless war.

Obama, with his nuanced and multilayered approach to international affairs, got more or less a free pass. As long as nothing was blowing up, the American public seemed content to let him get on with things.

That all changed a week ago, when protests erupted around the world, allegedly triggered by a woefully amateurish film showing the Prophet Muhammad as an imbecilic, womanizing megalomaniac preying on an ignorant population to increase his power.

When clips from the film were posted on YouTube and religious leaders began to thunder against the offense to Islam, angry mobs attacked the US Embassy in Cairo, Egypt and the US Consulate in Benghazi, Libya.

The US ambassador and three other Americans were killed in Benghazi; in Cairo, the grounds were breached and the flag was torn down, but there was less violence. Protests have since spread to Yemen, Tunisia, Pakistan, Afghanistan, India, Malaysia, Indonesia, and even Europe and Australia.

Now both candidates are being peppered with questions on foreign policy; how they react may well sway the small number of undecided voters in a close and tense race.

The Pew Research Center recently conducted a poll showing that 43 percent of Americans have been following the news on the protests in the Middle East “very closely, making it by far the most closely followed foreign news story of the year.”

The Romney campaign has taken several missteps since the crisis began.

First, within hours of the attack, while events were still unfolding, Romney issued a statement calling the administration’s reaction “disgraceful,” saying, incorrectly, that the Obama team had expressed “sympathy” with the attackers.

Then Romney’s running mate, Paul Ryan, insinuated in a speech in Florida over the weekend that the Obama administration indirectly invited such attacks.

“If we project weakness, they come,” he said, and if the nation is “strong” our enemies “will not test us.”

So far the electorate seems to be giving Obama the edge: The Pew poll showed that 45 percent of respondents thought the president was handling the crisis well, while only 26 percent approved of Romney’s comments.

But Obama, who had been resting a bit on his “Osama bin Laden is dead” laurels, is facing new challenges as the crisis continues to develop.

The US president’s kudos for helping to topple dictator Muammar Gaddafi all but evaporated last week. There was little evident gratitude in a mob that seemed to be acting out a long-simmering resentment of US policies.

In vain do officials like Hillary Clinton explain that it is not the Libyan people who were behind the attacks, but a “small and savage group.”

Americans just do not understand “why they hate us,” and their patience for intervention in a part of the world where their presence is not appreciated is at a new low.

Mounting tensions over Iran have compounded the problem. Israeli Prime Minister Benjamin Netanyahu is demanding that Obama draw a “red line” on Iran’s nuclear program, a stage that Tehran may not cross without inviting military action.

Romney has been joining in with Netanyahu, and old friend and colleague from their days at the Boston Consulting Group in the 1970s, in calling for the president to be tougher on Iran.

All this might pose some difficulties for the Obama campaign, if Romney did not seem so intent on sabotaging himself at every turn.

A surreptitiously shot video in which the Republican candidate dismissed almost half the population as irresponsible tax-shirkers who feel “entitled” to such government goodies as food, housing and health care is unlikely to do him any favors. It serves to reinforce the image the Obama camp has sought to paint of a man hopelessly out of touch with the lives of ordinary Americans.

In addition, details have emerged of a Romney campaign badly in disarray, with a candidate unable to delegate and subordinates unwilling to work together.

In all, it’s been a bad week for the Republicans.

It is too soon to tell how the current crisis will play out. A suicide bombing in Afghanistan Tuesday has been attributed to anger over the Muhammad film and violence could well spread.

This will call for some firm and sure-footed action from the president, designed to calm the waters while sending a clear message that America will not allow itself to be blackmailed or intimidated.

The target of whatever carefully calibrated response the administration issues will ostensibly be the restive populations of the Middle East and other parts of the Muslim world.

But in reality, with just seven weeks to go before voters go to the polls, the real intended audience will inevitably be the American electorate.