Even Ann Romney's not buying this

The campaign is still trying to reach women. Too bad Mitt's written so many of them off as the 47 percent 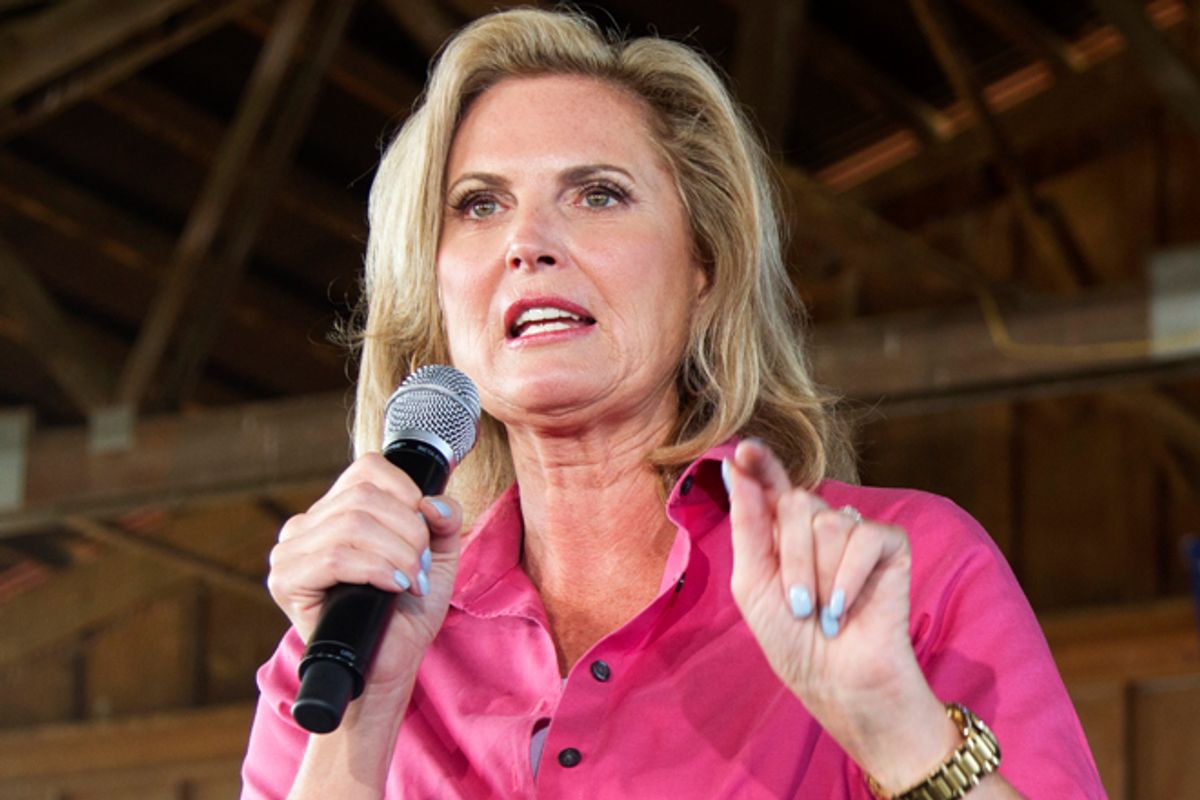 “We, uh, use Ann sparingly right now so that people don’t get tired of her,” was another queasy comment Mitt Romney made at his now-infamous Florida fundraiser. Judging from Ann Romney's interview last night with a Colorado television station, she's the one getting tired. Trotted out to make the pitch, once again, to women voters, she was also wearily obliged to defend him -- and not very convincingly -- on comments that suggested he's written off the vast majority of women in this country.

"More and more people are falling into poverty -- more, in particular, women are falling into poverty," Ann recited dutifully. "There is a concern on his part, which is why he's running -- is that, he wants to make sure to bring better economic opportunity for women. I know the guy, I know him really well, I know he cares, and that's why we're running."

This is Ann Romney's sell on her husband in a nutshell -- I know and love Mitt, and that's why you, especially you ladies, should just trust him. But this week, it's never been less convincing, precisely because so many of those women fall into the mythical 47 percent that Mitt dismissed as unreachable.

Let's start with the elderly. Women make up 57 percent of all Social Security beneficiaries 62 and older, and 68 percent of those 65 and older. They're likely to rely more heavily on Social Security income at the same time that they get less of it -- thanks to lower lifetime earnings and being less likely to have other income, such as a pension drawn from having been in the full-time paid workforce. According to the Social Security Administration, in 2010, the average income received by women 65 and over was $11,794 a year, while the average income for a man was $15,231. Half of these women relied on Social Security for 90 percent or more of their income.

Meanwhile, those child tax credits and earned income tax credits were championed by conservatives partly to get low-income mothers into the workforce. And it worked: economists Nada Eissa and Hilary Hoynes of the University of California, Davis, have noted that "the overwhelming finding of the empirical literature is that EITC has been especially successful at encouraging the employment of single parents, especially mothers." These are women (and children) who are far more likely to live in poverty. As the National Women's Law Center points out, "the poverty rate for female-headed families with children was 40.9 percent, compared to 21.9 percent for male-headed families with children." As for education credits, women have for some time made up the majority at almost every level of post-secondary education.

That same NWLC report made plain what's at stake when we're talking about that 47 percent who aren't paying federal income tax (a limited and arbitrary measure in itself): "Whether policy makers choose to maintain and strengthen programs that bolster the recovery  and protect the most vulnerable – or cut those  programs while expanding tax cuts for the  wealthy and corporations – will play a crucial role in determining whether more women and families are lifted out of, or sink into, poverty in the years to come."

But all of this assumes that the Romney campaign is substantively interested in whether those women and families live in poverty or not. Sure, with Ann at the forefront, it's been nominally addressing those women, seeking to imply with no evidence that Obama has somehow willfully driven then into poverty or dependency. But ultimately, they aren't the ones the campaign is after at all, judging from both their policies and their messaging.

Indeed, judging from "Dear Daughter," the campaign video released this week, the Romney campaign has a pretty good (and plausible) idea of the women who might vote for him -- white, married women like the soft-focus blond mom with a cuddly infant who stars in it. Sure, there's a nod toward female unemployment, but the real crux of the thing is the idea of inheriting the national debt, which women care about because they give birth to children. Slash and burn away. That's consistent with the message pushed by Ann in the interview last night and elsewhere: "If they are mothers, they are worried about their children." Single mothers whose most urgent worry is not the national debt -- and who tend not to turn out anyway -- need not apply.

Ann also said, "Speaking from the perspective from a wife and a mother, the things that I know that I care about, I want to know what motivates the guy -- the person that I would be voting for. And I would say what motivates Mitt is that he cares." She cited the heartbreaking individual stories told at the Republican National Convention -- relegated to non-prime time thanks to a preference for Clint Eastwood -- by people who had been helped or counseled by her husband. That model of individual charity is, of course, the preferred alternative of people like Mitt Romney (or at least, the kind of person he is currently presenting as). But for women, that model offers a mixed blessing.

At the RNC, fellow member of the Mormon leadership Grant Bennett spoke of how "Mitt prayed with and counseled church members seeking spiritual direction, single mothers raising children, couples with marital problems, youth with addictions, immigrants separated from their families, and individuals whose heat had been shut off." He didn't mention the woman he tried to talk out of having a lifesaving abortion, or the single mother he sought to convince to give up her baby for adoption, or the Mormon feminists whom he alternately tolerated and called "not my kind of Mormon."

Those women were nowhere to be found -- probably because in all of this percentage-crunching, they just didn't count.