Pundits care about dumb statements more than voters, but make enough of them and they add up 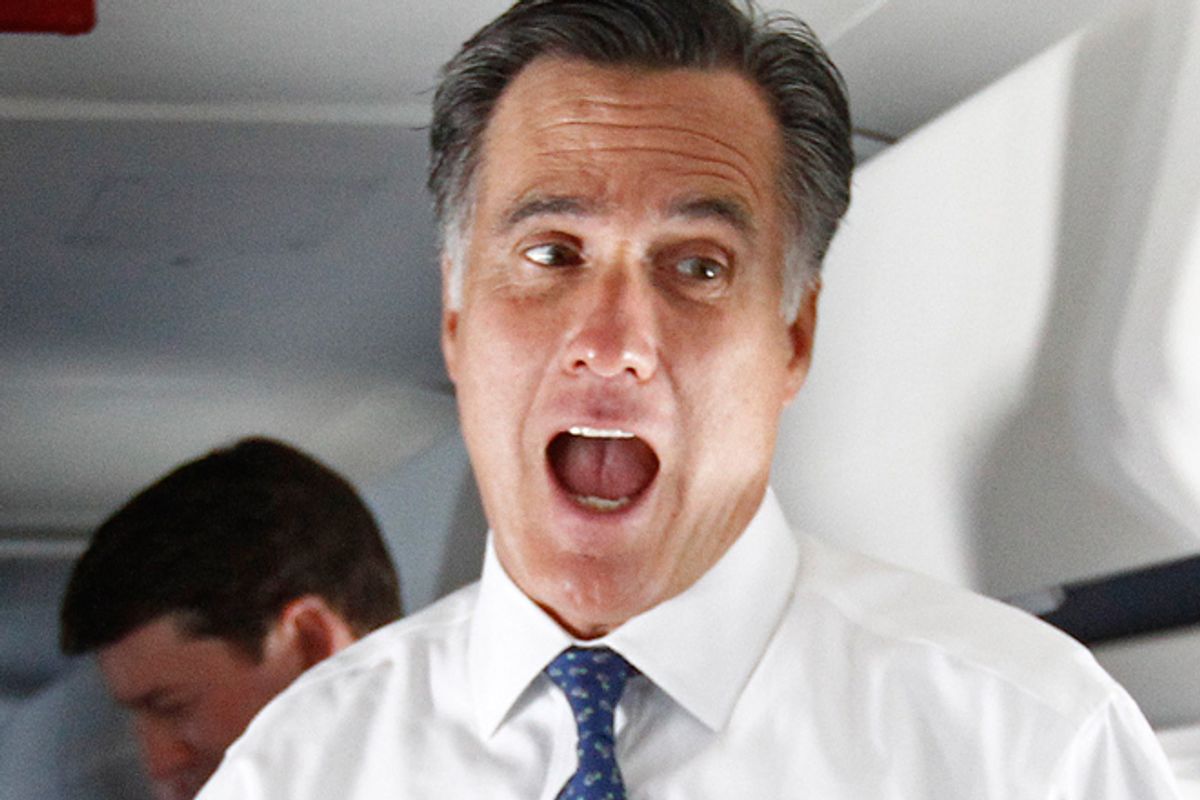 Gaffes don't actually matter. It's sad, but true. John Sides has basically proven it, with his fancy math and graphs. Obama's gaffes this summer -- "you didn't build that" and "the private sector is doing fine" -- didn't lead to any shift in the polls. Following Romney's shameless Libya statement, he actually gained ground on Obama.

And we all sort of know "gaffes" don't matter. It was delightful when Mitt Romney was going around making a fool of himself in London. It was also obvious that it wouldn't hurt him in the polls because no one was paying attention to the presidential race yet (and also who cares about insulting British people?). So it didn't move the needle.

But did it contribute to the fact that large majorities of voters think Obama is better on foreign policy than Mitt Romney? Did it make it easier for Democrats to paint Romney as a blundering incompetent? Seems like it!

A million different things now count as "gaffes." Some of them are stupid campaign ephemera, or meaningless out-of-context snippets of quotes, and many of them simply won't change anyone's vote because most voters have made their minds up already. Obama's been president for four years and everyone already has a set opinion about him. But Mitt Romney was definable until he was finally defined -- as a bumbling plutocrat with no core. His "gaffes" -- from the time he edited the Romneycare section in his book to the "47 percent" video -- were what his opponents (and the press) used to make the case to voters that Romney is awful, and lots of voters have so far found the evidence pretty compelling.

What Sides shows is that gaffes don't matter individually or immediately. And of course they don't, because few people pay attention to the news the way we (journalists, commentators, bloggers and people who read Salon) do: almost obsessively. The Romney tape just came out on Monday, and the campaign has a couple days still to furiously spin in order to make sure that the end result is a wash for Romney. But it takes a bit of time for this stuff to trickle down to people who consume political news like normal people, in a limited and incidental fashion. (This is a good argument for partisans to keep hammering on the same stories over and over again, by the way, even though the commentariat gets bored within like three hours of a story these days.) The comments will be repeated in ads in October and November (political science is also sorta iffy on whether or not ads matter, but still), and probably continue coming up every time Romney says or does anything for the next month. If he suddenly starts beating Obama nationally or in Ohio or Virginia, we can say this gaffe didn't matter, but if he continues trailing, his treatise on moochers will be part of the reason he can't bridge the gap.

And "gaffes" add up. Why do you think Obama leads, according to Pew, in "trait" questions on subjects like "Good judgment in a crisis" and "Connects well with ordinary Americans"? Could it be, in part ... because of Romney's gaffes?

We can acknowledge that 99 percent of pundits are useless and that very simple formulas can basically tell us how most elections will turn out, but there is still a human element. I think we can look at "gaffes" similarly to the way we look at negative ads: They don't matter as much as pundits think, sure, but they have an effect on the result. Just as campaign ads matter more with unfamiliar candidates -- and hence they matter more in congressional races than national races -- gaffes are clearly more likely to sink congressional candidates (Sharron Angle, George Allen) than presidential ones. (And Romney gaffes probably motivate Obama supporters, just as negative ads seem to help motivate partisans.)

Finally, we do have some evidence of gaffes being reflected in polls and election results. Sarah Palin, a human gaffe, was a drag on John McCain. Mitt Romney is no Sarah Palin, but if Obama "outperforms the fundamentals" in November, Romney's "gaffes" will have played a part.