In Israel, concern about Romney's chances

While Mitt benefits from Netanyahu’s barely disguised support, Israeli backers worry his campaign is on the fritz 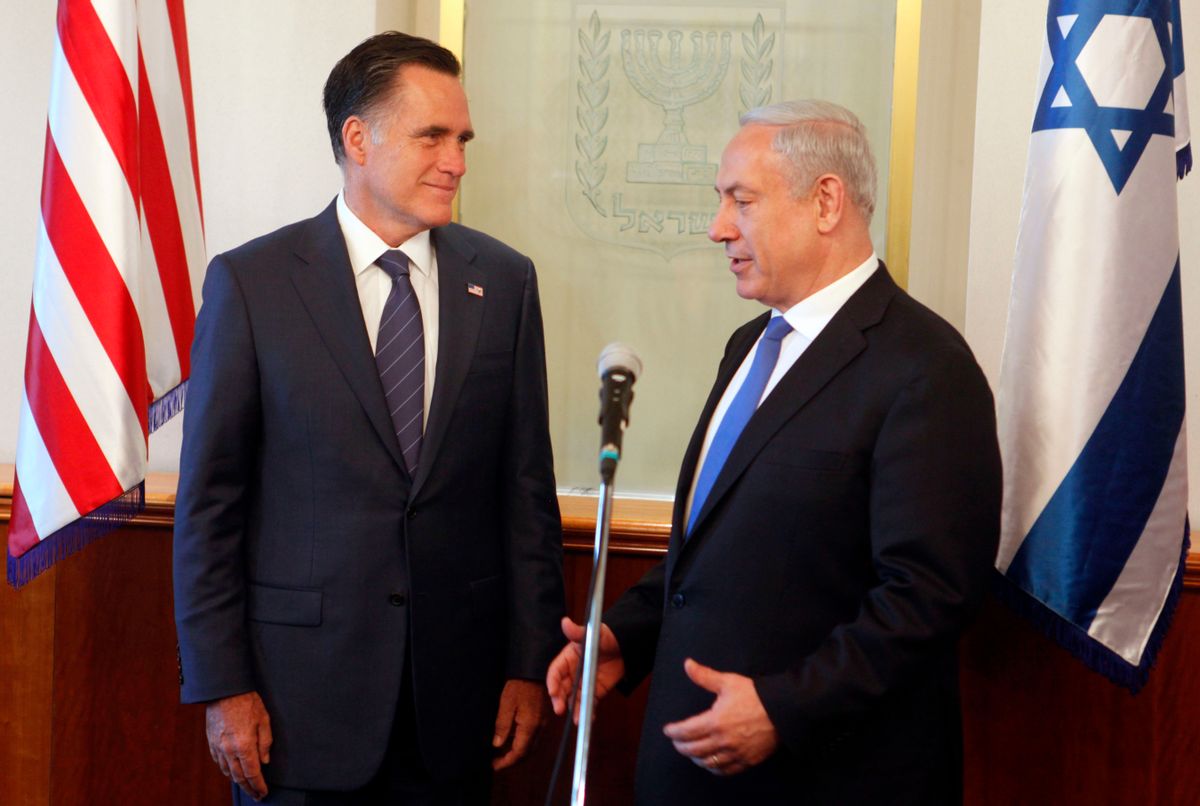 JERUSALEM — Among the information gleaned from the leaked Mitt Romney fundraiser videos, one of the least remarked-upon tidbits, in which he touts his staff, raised a few Israeli eyebrows.

"I have a very good team of extraordinarily experienced, highly successful consultants, a couple of people in particular who have done races around the world," Romney says. "I didn't realize it. These guys in the US — the Karl Rove equivalents — they do races all over the world: in Armenia, in Africa, in Israel. I mean, they worked for Bibi Netanyahu in his race. So they do these races and they see which ads work, and which processes work best, and we have ideas about what we do over the course of the campaign. I'd tell them to you, but I'd have to shoot you."

In Israel, politicos and pundits have been scratching their heads trying to figure out who it might be. The last known American consultant to work on a Netanyahu campaign, in 2009, was actually culled from deep on the Obama bench — Bill Knapp, a member of the Obama national media team in 2008. Josh Isay, another Obama consultant, also worked on Netanyahu's last campaign.

"I just don't know. And I don't know which advisers might just be talking. I don't know if at the time of Romney's visit here, [July, 2012] they consulted,” said one Netanyahu adviser, a foreign policy expert. “A lot of candidates get briefings and then talk in closed forums, and they have to understand that the 'closed forum' no longer exists."

One of the people who managed Netanyahu's last campaign said, "Romney's assertion seems odd, I have to say. It seems farfetched. I am surprised because though he wasn't in the inner circle, the guy we had consulting for us in 2009 was an Obama guy, and I haven't heard he's now with Romney."

The former campaign manager does not envy anyone in the top tier of Romney's campaign today.

"I hear there's a lot of infighting," he said.

"Unless something dramatic happens, I think Obama will win, or to put it more accurately, Romney will lose. All the Republicans really needed in this election was a decent candidate, a candidate better than mediocre. But right now, despite the fact that Obama's situation is not good and that people don't see him as a great president, I can't see how the Republicans can win."

"They didn't need anyone amazing, but at least, someone who wouldn't so consistently screw up. It looks to me like the Republican Party has not succeeded in this. You really need some talent not to beat Obama in an election like this!"

Speaking at length with GlobalPost, Mark Zell, the co-chair of Republicans Abroad-Israel, did not seem to be having a great day. He is a true-blue believer in Romney, who he met during Romney's Israel visit two months ago. He said that he found Romney "well-read and thoughtful," and that the candidate is getting a raw deal from the "mainstream media," which portrays him as "stiff and distant."

Among other factors, he is disappointed by polls that consistently show Obama winning about 70 percent of the Jewish vote.

"Jews in the US have got their heads up a particular cavity," he says. "We're trying to get through to them that they have been deceived as Jews. But then, they're not voting as Jews — they are voting as liberal Democrats. It's just irrational."

"The Democrats are bad for us," he continues. "There is no better illustration than what happened at the DNC. How could the chairwoman [Florida Rep. Debbie Wasserman Schultz], who is a Jew, speak that way, openly lie — and that whole vote on the Jerusalem issue! It was embarrassing to me as an American. That's the Democratic Party! And the Jews are voting for it. I read the polls…."

Zell believes the video shot at a Boca Raton fundraiser was released by the Obama campaign as a preemptive "October surprise" aimed at crippling Romney, because of the president's "bad numbers on foreign policy."

Obama, he says, "has run an abominable administration on two crucial issues — the economy and foreign policy — he has utterly failed on both, so they try to focus on bogus issues like the tax returns or Bain Capital, and now this."

All that said, Zell believes Obama has been more successful at getting his message out to Americans or, in his words, "at throwing sand in the eyes of American citizens."

Zell said he approves of every word in Romney's controversial statement about the futility of pursuing peace with the Palestinians.

"What Romney said about Israel was right on, exactly correct. The Palestinians are not seriously motivated to accept Israel as a Jewish state in any negotiations. This was an observation Romney made that I think is highly insightful. Clearly, it is out of step with the traditional thinking of presidential candidates, who normally just mouth off what they are told. Romney has thought this through, and he is absolutely correct."

"For the president of the United States to waste resources and the political capital of the US presidency pursuing a phantom dream is frankly wrong."