Income inequality greater than in 1774 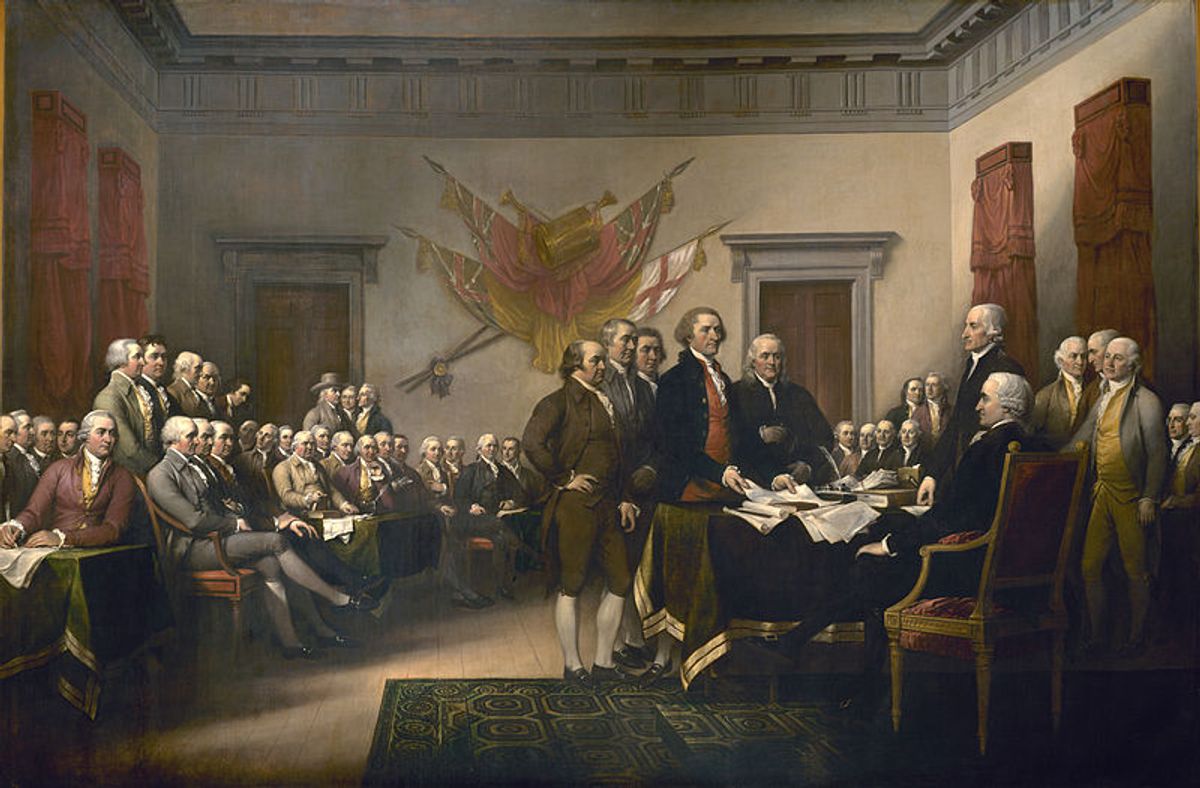 John Trumbull's "Declaration of Independence." According to a study, income inequality is greater now than it was when the Declaration was signed (Wikimedia)
--

In the past year a steady stream of articles has trumpeted the gravity of current U.S. income inequality levels. We've not seen these levels of wealth inequality since before the Great Depression, analysts remark. The Roman Empire, one study argued, was more equitable than the United States is now. And on Wednesday, the Atlantic picked up on another alarming comparison: "Income inequality is worse now than during slavery."

The conclusion comes to us from an newly updated study by professors Peter Lindert of the University of California - Davis and Jeffrey Williamson of Harvard. Scraping together data from an array of historical resources, the duo have written a fascinating exploration of early American incomes, arguing that, on the eve of the Revolutionary War, wealth was distributed more evenly across the 13 colonies than anywhere else in the world that we have record of.

Weissman urges caution, noting that such a study of the "thinly recorded past" necessarily involves "lots of conjecture" as authors use sources like old tax lists, occupational directories, census documents and early scholarship. "They're not so much taking a snapshot of what life was like as they are making a messy collage," he notes.

The study authors conclude that income distribution was more equal in colonial America than in countries including England and the Netherlands in the late 18th century. More striking, they find that U.S. income distribution is less equal now than in 1774. Weissman notes, "By the time the Civil War came, the top one percent of U.S. households laid claim to 10 percent of the nation's income, versus about seven percent during the founders' era. Today, the same group accounts for about 19 percent."

Of course, as Weissman is keen to stress, the study does not mention the many political and racial inequalities that have significantly diminished since 1774 (slavery, for one). "The paper only suggests that on a strictly dollars and cents basis, income was skewed less towards the rich during the colonial era than it is today," he notes.

It doesn't take a Foucauldian scholar to be skeptical of this sort of historical comparison, which leaves questions of the operation of income and power in a given context and era totally unexamined. At the very least, what this study does illustrate -- along with those comparing pre-Great Depression or Roman Empire inequality levels -- is a current scholarly interest in our current income inequality levels.