Just what the already sentimental drama does not need: A cancer story line 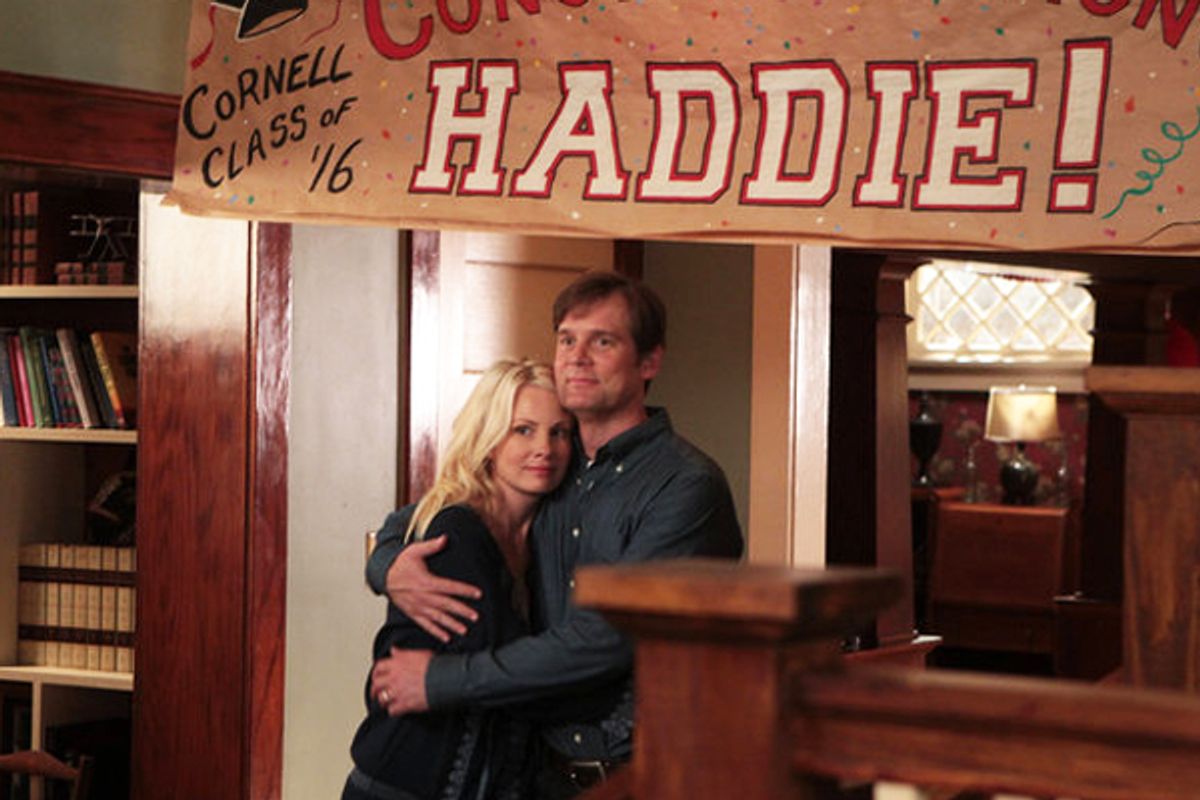 The number of TV dramas that are neither procedurals nor heavy on home-brewed “mythologies,” that are overrun with neither heroes nor antiheroes, that are sweet and soothing without being stupid, that take as their subject the human capacity to love and change, and deliver a cathartic cry almost every single week, is exactly one: NBC’s “Parenthood.”

“Parenthood,” adapted from the film of the same name by “Friday Night Lights” showrunner Jason Katims, is the story of the Braverman clan, a close-knit group of Berkeley-ites with normal-for-bougie people problems and an abnormal closeness. It is the sort of series that spins a dramatic confrontation out of a girl sleeping with a cheating guy, not by having the girl and guy duke it out, but by having the girl and her overprotective uncle politely get into it about boundaries. Other high-stakes story lines from last week’s fourth season premiere included a fiancé’s heartfelt plea to make it into the Braverman family photo, a father deciding  how to talk to his son about God, and a teenager going off to college. In last night’s episode, the second of the new season, plots spun around family scheduling, first heartbreak and puppy purchasing. Oh, and also cancer.

At the end of last night’s episode, it was revealed via montage that Kristina Braverman (Monica Potter) has breast cancer. Kristina and her husband, Adam (Peter Krause), are the show’s most conventional couple, happily and squarely married with three kids — a brand-new baby, a son with Asperger’s and a daughter who had just graduated high school. In the season’s first two episodes the pair have been loving, exasperating, caring and annoying in plausible ways. Last week as their daughter Haddie was preparing to go off to Cornell, they bullied and hectored her into family activity after activity, smothering and irritating her out of love, and never quite seeing the error of their ways. Their continual small-bore, unyielding focus on their son Max, who has Asperger’s, rings entirely true while also being shrill and unyielding. This week, their story line revolved around the high drama of getting a dog, until it ended with the fastest mammogram-to-diagnosis sequence in TV history.

To the non-“Parenthood” fan, a cancer plotline might seem in keeping with the show’s rep for being a serious tear-generator. And as often as the show has milked drama out of the undramatic and conventional — a teenage boy experiencing his first heartbreak, for example — it has also played with melodrama staples like drug-addicted ex-husbands and ill-advised affairs. But a cancer diagnosis in a young mother is too on the nose for “Parenthood,” a show that finds just enough maudlin in the mundane that it should leave the maudlin in the maudlin well enough alone. This is not a series that needs a deus-ex-machina diagnosis and subsequent deep-dive into mortality to be a four-hanky affair.

As with the the most infamous bobbled storyline "Parenthood's" showrunner Katims ever had anything to do with — the Landry murders someone story on “Friday Night Lights," in which Landry killed a guy, and then, because that was such a bad, phony idea, everyone pretended it never happened—  giving Kristina cancer seems like the sort of “high-stakes” arc that might appeal to someone who doesn't actually watch the show. What's going on on "Parenthood" this season? Sarah figuring out her life, Crosby being really happy, and Ray Romano guest-starring as a malcontent photographer might not sound like much -- but in "Parenthood's" thoughtful way, it would have been. One character "fighting cancer" may be more high-concept, but the sledgehammer of disease seems sure to upset "Parenthood's" delicate emo-ecosystem. If the show needed to get Haddie back from the East Coast so badly, I wish they'd just sent her to UC-Berkeley.