The danger of writing off Mitt 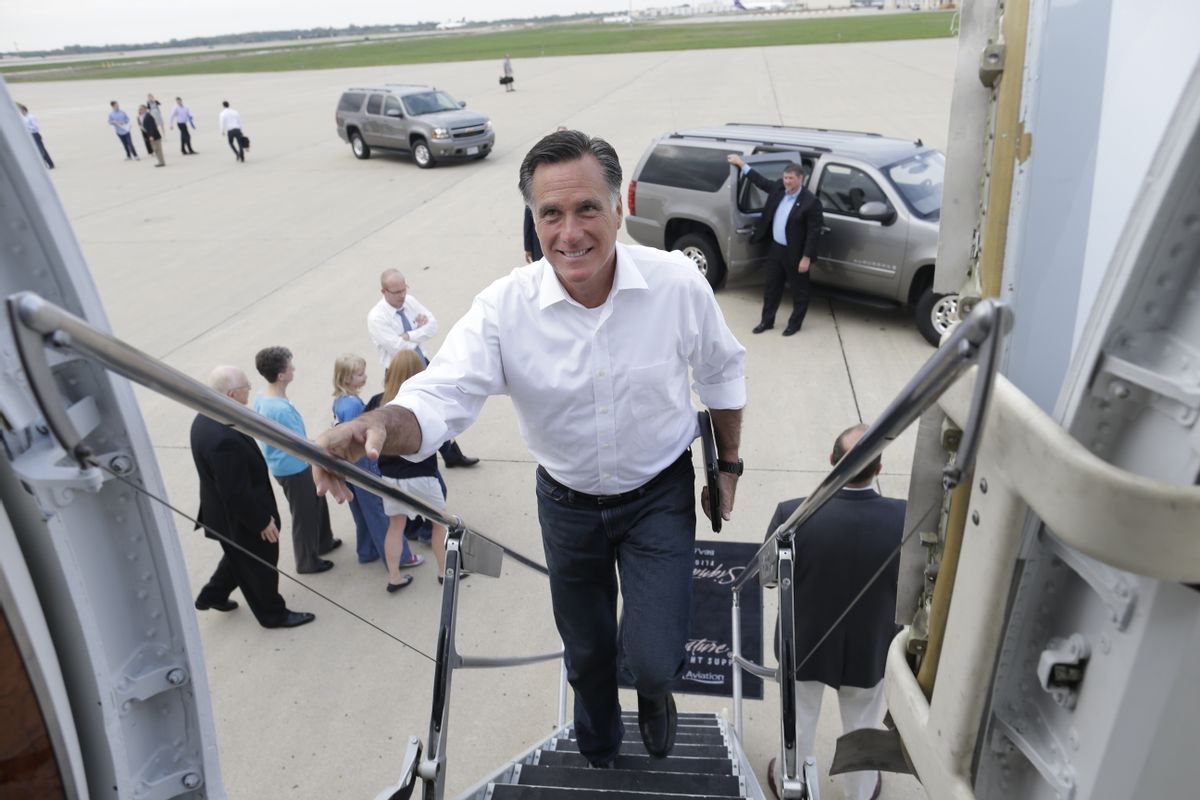 It’s come to this for Mitt Romney: As the public chastisements from his own party pile up, his best, and maybe only, source of inspiration left can be found in the story of a Democrat that Republicans love to hate.

That would be John Kerry, who eight years ago to the day found himself in a political hole rather similar to the one Romney now faces – and who managed to climb out of it and nearly win the election.

In a way, the 2004 race was a mirror image of this one. George W. Bush’s approval rating was low enough to make him vulnerable to a challenge, but not so low that defeat was automatic. It was the kind of race in which campaign events actually mattered, and the trajectory wasn’t that different from this year’s. For much of the summer, the race was about even, with Kerry generally enjoying a slight polling edge – although he failed to generate a meaningful bounce from his party’s July convention. Then, Republicans staged a successful convention in New York, one that leaned heavily on 9/11 and featured savage but effective attacks on Kerry, and Bush opened a clear lead that persisted for weeks.

Just as the post-Labor Day conversation this year has been dominated by Romney’s woes, September ’04 was a brutal month for Kerry. Polls generally showed him running 6 to 8 points behind Bush, and panic and despair began to set in among Democrats, and to spill into the media’s coverage.

The perception took hold that Kerry was blowing a completely winnable election – that he was allowing Republicans to define him as a weak-willed flip-flopper, that he was too often playing to type, and that his campaign was failing to grasp and exploit the incumbent’s weaknesses. There were calls for a new strategy and a campaign staff shakeup. In a Sept. 16, 2004, column, Ellen Goodman wrote about the Democrats’ “September anxiety attack”:

It’s a day when the Bush bounce has hit Kerry supporters upside the head. The morning papers are full of polling reports suggesting that the president is on a roll. The pundits are full of rumors about a Kerry campaign shake-up.

The party that came out of the Boston convention in single-file unity has returned to its default position: a circular firing squad with the campaign strategists in the middle. The partisans in the street are frantic that the Bush campaign will "do it again" and take the low road to victory.

To anyone who’s been watching the current campaign, this should sound very familiar. Unlike Kerry, Romney never actually led his opponent during this campaign’s summer months, but he was close behind and Republicans were hopeful that a strong convention would push them into the lead. But the GOP’s Tampa gathering was a bust, and it was followed by a highly successful Democratic event in Charlotte – one that pushed Obama back into a clear lead and that prompted conservatives for the first time to confront the possibility they might lose in November. This has prompted the same very public second-guessing from his own party and campaign infighting that plagued Kerry in September ’04.

Kerry’s story offers a ray of hope for Romney for two reasons. The first is that Romney isn’t as far behind now as Kerry was at this same point. The Real Clear Politics average pegs Obama’s lead at just under 3 points (although this number could get worse in the coming days if Romney’s secretly recorded comments from a fundraiser earlier this year turn some voters against him). On this same day in 2004, Bush’s average lead was 6.7 points. So Romney has less ground to make up.

There’s also the fact that Kerry did end up erasing his deficit, or at least most of it. The key moment for him came on Sept. 30, 2004, when he and Bush met for their first debate. Kerry had come to the race with a reputation as a skilled debater, but because of where the race stood at the end of September, expectations actually favored Bush. Thus was Kerry’s strong, sharp performance something of a revelation, just as Bush’s shaky and erratic showing was jarring.

Almost overnight, it was a race again, with Kerry closing to within a point or two of Bush in the polling average (and grabbing the lead in a number of individual polls). This is where the race stayed through Election Day – close enough for the political world to treat it as a dead heat for all of October, and close enough for Democrats to stop deriding Kerry and questioning his strategy in public, and close enough for the press to again treat Kerry as a competent candidate.

Of course, we don’t now remember Kerry as a solid candidate who ran a good campaign. That’s basically because he lost. Had Kerry gotten over the top – and he came within a relatively small number of votes in Ohio of doing so -- the historical account of his candidacy would be much different.

An argument can be made that Romney is an objectively worse candidate than Kerry, one more prone to serious self-inflicted wounds and one hindered by a party base that expects him to articulate some very unpopular policy positions. But Kerry’s example shows just how quickly and thoroughly perceptions of a campaign can change. The upcoming debates offer Romney his most obvious opportunity to regain his party’s confidence and to alter the media’s treatment of him, and it’s worth remembering that he’s had some success in debates before. This is not a prediction that Romney will stage a comeback in the weeks ahead. It’s just a reminder that he could.

* * *
I was on "The Rachel Maddow Show" Monday night and talked about the Romney/Kerry parallel: