The problem with first ladies

Women compose half the workforce, yet the first lady is still an empty figurehead. When did her script go stale? 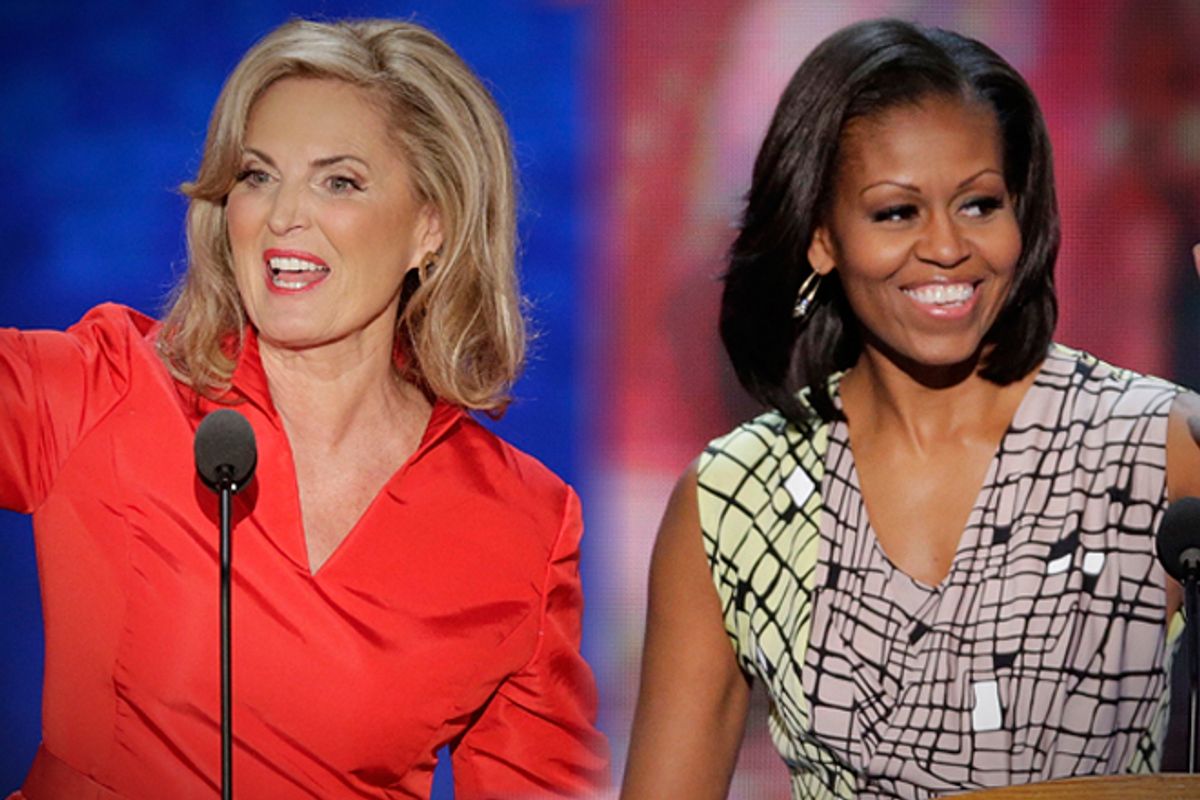 “We use Ann sparingly now, so that people don’t get tired of her–or start attacking,” said business-savvy Mitt Romney to his big money backers on the now infamous videotape.  You have to “use” your wife on the campaign trail–she’s auditioning for first lady.  But you don’t want to saturate the market with too much Ann, or people will stop liking her.  How revealing.

On a daily basis, she has to prove that she loves children, pets, and warm and fuzzy, kid-centered holidays such as Christmas and Easter.  But she’s smart, she knows the ways of the political world, and she can’t help every once in a while getting bored reading stories to second graders.  She wants to tackle a social problem.  She is unelected yet supremely influential.  People everywhere are conflicted over how the first lady is meant to fulfill her duties.

In part, the national missus is supposed to help us forget that every administration is knee-deep in who-knows-what.  Her job is to accomplish two things at once: project buoyant enthusiasm and an air of dignity; know how to be girlish and how to look serene in a gown.  If the presidency inspires awe full-time, she must aim to symbolize grace full-time.

Okay, there’s a monumental election coming up.  How do we deploy this live-wire whose role is not defined in the Constitution?  At the Republican and Democratic National Conventions this summer, Ann Romney and Michelle Obama were each called upon to attest to the qualities that caused her to fall in love with her husband.  Did you see how thrilled the candidates’ wives appeared up on the podium?  Emphasis on “appeared.”  Ultimately, she knows she is a prop, part of a plot, a campaign strategist’s ploy.  The audience–the viewers at home–are expected to get the message: “I love him, so vote for him.”

Lost in the commentary that followed the ladies’ convention speeches was any appreciation for the actual staleness of this scripted exercise, and how goofy our democracy has become when a woman is compelled to fire up the base and court swing voters by indulging in such blatant myth-making.  “Even though we’re super-rich, we’re a family just like yours!”  “One time when the kids were younger, their dad climbed a tree to rescue a ______.”  (Audience laughs and cheers)  “Isn’t that fantastic?”   No one says this directly; but all spin it indirectly.

Ill will toward a president does not have to mar the first lady’s image.  Pat Nixon was pitied.  Rosalyn Carter kept her hands clean.  It’s different when the president’s wife has a pronounced public presence, of course.  Eleanor Roosevelt was her crippled husband’s “legs,” it has been said.  She toured a torn nation in the Depression years, and her friend and biographer Joseph Lash compared her to the Virgin Mary, symbol of female compassion.  With a newspaper column and a social conscience, she communicated widely.  Yet the last book she published was the decidedly apolitical (and female-directed) "Book of Common Sense Etiquette."

As first lady, Barbara Bush wrote about her dog Millie.  Not Hillary Clinton, too smart for her own good, who gave us "It Takes a Village."  When he ran against her husband, Bob Dole attacked the book–“It takes a family!” he proclaimed.  "It Takes a Village" was more than an allegorical denial of traditional American values; it was a sneaky pitch for big government, right?  She had transgressed by acting political, until...As we all know, nothing helped Hillary’s image so much as the sympathy she garnered when Bill’s bad private behavior was confirmed.  Then she appeared appropriately vulnerable.  Strong first ladies are subject to slings and arrows.

It’s become worse since 2008, owing to the resentment our most illiberal citizens feel in refusing to acknowledge a black first couple.  From the famous “fist-bump” on the campaign trail, when the Obamas first “revealed” their Black Panther/terrorist-sympathizing true allegiance, most everything the first lady says or does has been politicized.  Conservative radio talk show host Michael Savage recently savaged Ann Romney as “the country club woman… Ms. Perfect,” someone easy to dislike.  So, this is not just an anti-Obama thing.

Lady Bird Johnson was every bit a female club woman in her support for a national beautification program.  She had a college education (University of Texas-Austin) and understood business as well as political campaigning.  But she was seen as a very proper and deserving political wife, nothing like the image we are now treated to, of a smug, nose-in-the-air Mrs. Romney.  Soft-spoken, well-bred Jacqueline Bouvier Kennedy famously redecorated the White House.  Former second-grade teacher Laura Bush promoted literacy, à la Marion the librarian.  Michelle Obama’s campaign against childhood obesity–setting aside über-mom Sarah Palin’s resentful “just leave us alone, get off our back” reaction–certainly fits the category of appropriate first lady projects.

Which is half the problem.  The “appropriateness” factor describes a feminine ideal not in keeping with today’s real world, in which women approach fifty percent of the workforce (even as gender disparity in salaries has hardly budged); on college campuses, female undergraduates are clearly in the majority.  The other half of the problem is that Americans do not recognize their own need for a democratic royalty.  The first lady is tasked with looking comfortable amid the trappings of quasi-royal privilege, while feeling perfectly at home among ordinary folks.

Although Americans gave up kings and queens in 1776, residual longing for a “monarchy substitute” still exists.  You’ll note that just when our nostalgia for Camelot seems to disappear, a new generation of Kennedys rises to run for national office.  The queen has her royal yacht; the president travels on Air Force One, a flying island with its own operating room.  And when the first lady is young-ish, provided that she’s not frumpy, there is not a whole lot of difference between the media’s obsession with her looks, hair, and dresses, and the attention lavished on a Princess Diana, or, nowadays, Kate Middleton.

Given such conflicted expectations from our first ladies, it means more now that both parties have willingly countenanced a pointless, artificial competition between the Obamas and the Romneys–in effect, an argument over which couple has the best marriage.  Why should we have to play “The Newlywed Game” in a presidential campaign?  Does any female voter choose a president based on whether she regards him as the perfect husband?  Let’s hope not.  When Mrs. Romney and Mrs. Obama square off at their respective conventions, and Mitt feels he has to “humanize” himself by singing (a mile off-key) multiple verses of an old-fashioned patriotic tune to match a few breathtaking notes of Barack’s Al Green tribute, we have made the election into soap opera.

Ideology of this kind ought to disturb us, the notion that if a first lady has a brain, better we should not see it very often.  It’s dated, to say the least, to suggest that men offer the country their heads and women supply heart; that men make tough decisions and women dispense charity and spread beauty.  As Hillary found when she tried to point the way on healthcare reform, Americans don’t want a backseat driver or co-president.  For what it’s worth, when thirty-five-year-old Robert F. Kennedy became his brother’s attorney general, there was a brief nepotism stir, but because RFK was male, the president’s quip about giving Bobby “a little legal experience before he goes out to practice law” had its intended effect.  Had it been a female Kennedy, of course, the result would have been entirely different.

Simple-minded, formulaic treatments of the candidates and their wives suggest that the problem goes beyond the issue of gender equality.  Jodi Kantor’s bestselling book on the Obamas, published earlier this year, notoriously upset the first lady–which, for a while, was its principal claim to fame.  Kantor half-admits she doesn’t know much of substance about the Obamas’ marriage.  But in interviewing people who do know the first couple, she reverted to expected tropes, composing a narrative that drowns itself in clichés about the frantic wife trying to adjust to her new duties.

This is the same script that supports just about every Lifetime TV movie.  Kantor’s first lady worries about her children, worries about her husband’s safety, feels trapped in the feminine mystique that must define her public role.  And yet, armed with her people skills and a womanly insight, she does what a heroine has to do on Lifetime, which is to rescue her cerebral husband from himself.  Thus the banality that becomes our news about the first family comes to resemble the banality of our self-help bestsellers–which makes Kantor’s faux “inside” look at the Obamas’ relationship hardly different from an advice book directed at the masses, on the order of “Men are from Mars, women are from Venus.”   Rather than expose problems with the old feminine mystique (the problem of conformity to gendered expectations), Kantor cannot help but reify the problem.

The private sphere is supposed to transcend the dirty game of politics, but it does not.  An overly saccharine domesticity is converted into just another tool in selling a candidate.  The convention speeches of Ann and Michelle were calculated to market Mitt and Barack, just like a Hallmark card or a tin of beef stew.  Yes, let’s designate them beef stew.  Early in the twentieth century, the canning industry had to convince housewives to trust their product–vegetable and meats hidden in tins.  Their solution was to apply attractive labels, the right colors, and recipes on the side of the can.  Naomi Wolf, the author of a new biography of the vagina, was brought in to advise Al Gore in 2000 on appealing to the female psyche: she told him to dress in female-friendly colors.  You can be certain the two campaigns gave considerable thought to the color (and labels) of the outfits Ann and Michelle wore as they pranced across the convention stage.

Buyers have no idea what’s inside the can.  Instead they have the wife, with her big smile, and they half-see the loving gaze meant to mirror her husband’s soul.  But don’t forget that it was Bill Clinton who rode to the rescue at the Democratic Convention.  As folksy as he was, he didn’t talk about feeling Obama’s or the country’s pain this time.  He didn’t invoke family values.  He talked about arithmetic–detailed numbers–the concrete issues so often obscured in this mostly soap opera-ish election.