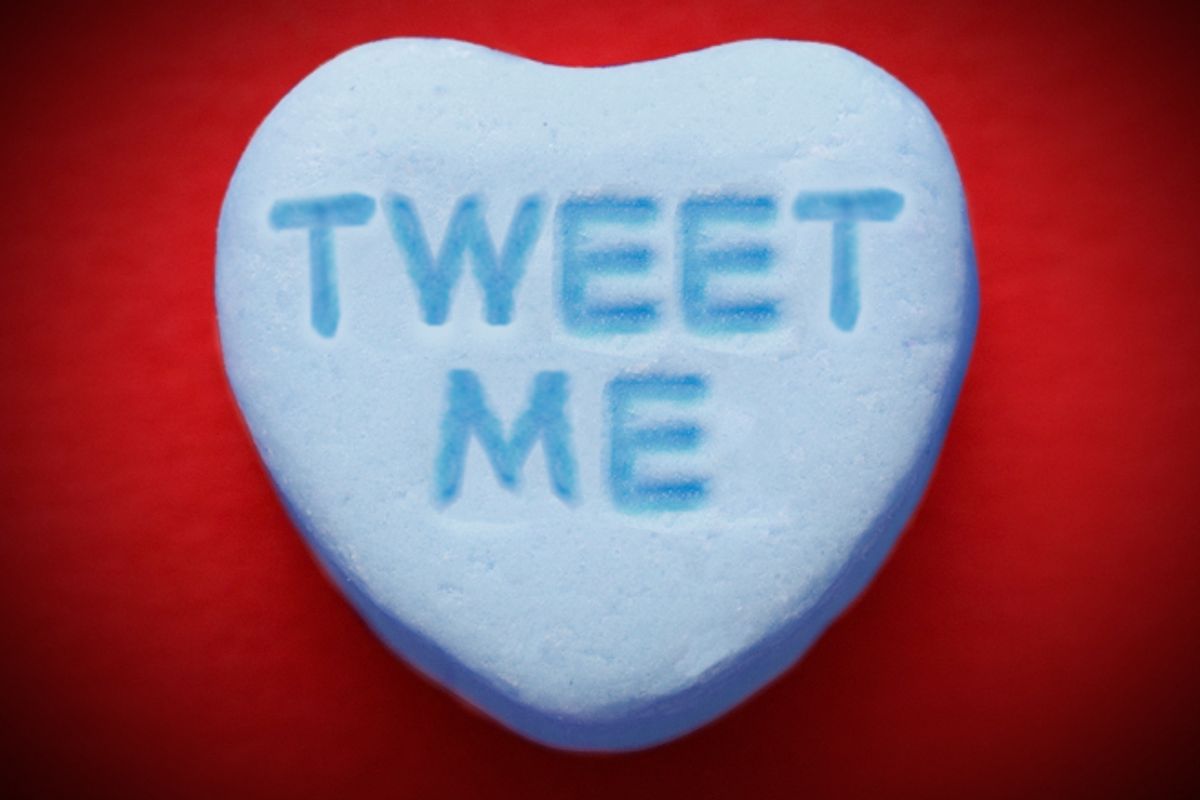 A man I never met broke my heart. He followed me on Twitter, on the account I use for occupiers and politics. We flirted about anything: waterfalls, suede boots, doughnuts. He was witty, attentive, charming. His punctuation was exquisite. After dark, we sparked.

I was on my way to New York for a wedding, and thought he'd said he lived there. When I hinted about meeting, he promised to open the door naked. So I sent a private message to find out if he was in the city. He was home watching a movie and ended up telling me about being betrayed by his ex. I tried cheering him up.

We should write a comedy, I replied, only half-joking.

He sent me the clip from “King Kong” where Adrian Brody kisses Naomi Watts for the first time. It was the most romantic thing anyone had done in ages.

Where are you? I asked. I was lying in the hall on my stomach like a schoolgirl, feet in the air.

Hmmm. Okay. I am at my desk, in my bedroom, in my apartment. lol

Q: Where are you?

Somehow we ended up playing stripTwitter. Hours later, tangled in bedsheets, battery dying, I was grinning but still didn’t know where he lived.

So you enjoyed? Is it common on Twitter? I should think it is.

My Twitter world was a playground for introverts and insomniacs, confessing intimate details while the rest of the world slept. I had no idea what went on behind the scenes.

Our affair grew more intense, the Twittersex more creative: office fantasies and spankings and underwater escapades. We met in the snow globe, our secret place.

I slide both my hands slowly into your hair on either side of your face. "Not a game." I whisper. Then lean slowly in to kiss you.

I knew how he liked his coffee and wore his hair. How his friends worried when his girlfriend moved out. He was always up at 1:26 Pacific. And he seemed to need me. I started coming home early Saturday nights to be with him.

I clutched my iPhone as I slept, joking I could read his mind. Sometimes it seemed I could.

My New York trip loomed. I had one free night in the city and reminded him we needed to make plans for our first date. Because, I said, years from now, we’ll want a story to tell people about how we met.

I suspect you’ll be irritated with me, he wrote. But I can’t meet you.

He was in the South visiting family and wouldn’t be back in time. Also he wasn’t ready to date again. He’d made some ridiculous rule about not meeting anyone from the Internet.

I thought Twitter would be a safe place to play without hurting anyone.

I picked up the Golden Gate bridge snow globe I’d bought him. It wasn't like I'd been looking for love; I'd been tweeting about bank protests and income inequality. Suddenly I found myself reading Neruda.

How could he not meet me when I was going to be in N.Y. anyway?

So I did what any woman would do. I made a PowerPoint: Top 10 reasons he shouldn’t meet me. (No. 9: I might break his heart.)

He answered immediately. Jovially. Affectionately. Slide by slide. (No. 9: Or he might break mine.)

I tried negotiating, pointing out this was stock romantic comedy.

Why don't you write both sides, that way everything turns out as you like?

If I were a woman I would be saying, No is no is no.

Normally, I'd have stopped by now. But I was convinced we were meant to know each other. And he followed stern refusals with tenderness.

The punishment for tempting you out both sides of my mouth is getting my mouth kissed on both sides.

Is this real? I asked more than once.

I consulted friends. Eileen thought he was either too wounded to meet me or a 70-year-old living in his cousin’s basement.

I bought new clothes for the wedding including a necklace with tangerine-colored stones called Venus Sunrise.

Everywhere I went, people radiated toward me. I commissioned a sidewalk poet to write about my virtual boyfriend. He sat at his typewriter: “Our whole world is one place even if that one place isn't located anywhere in particular.”

Then I sent my virtual boyfriend a college photo: at 20, a doe-eyed dreamer. It wasn’t the picture I’d put in the yearbook. Even then I‘d chosen a more confident, capable image, as I would for the next 20-odd years.

For hours each day we giggled and made out and in between, discussed rock climbing, and who would play us in the movie. He woke me for hot-and-heavy Twittersex while I was getting my hair done.

And periodically I pressed again about meeting.

Did he get a lot of PowerPoint love letters? By now, I didn’t even care about meeting in N.Y. But never? I packed the snow globe.

Tuesday was my free night before the wedding. We spent it together. After Malaysian dinner I sat in Washington Square Park on a park bench, the Empire State Building floodlit through the arch. It was romantic and heartbreaking, like “The Sixth Sense.” Me and my imaginary lover on my iPhone.

I confessed I had a gift for him. He tried persuading a friend to pick it up at my hotel, without luck. He cautioned me not to wander too far on my own. As a native New Yorker, I scorned his protectiveness but eventually hopped in a cab when my phone battery got to 10 percent. I wasn't used to anyone caring where I went after dark.

Later he consoled me.

Why don’t you keep it for the possibility of placing it in my hand?

I so want to kiss you now.

Amid the wedding craziness, I decided to come back to the city a day early and sent a 3 a.m. invitation: spend Sunday with me before I flew home; or I'd return in six weeks, when I hoped he'd be over his ex; or I could leave the gift at the front desk. For once I hadn’t hesitated about love, convinced he was worth it.

In the morning, he sent a polite but cranky “no” to all three with a disclaimer that something else was going on, perhaps he shouldn’t reply yet.

We caught up the next night, as I drank cocktails.

Not to tease, but I’m less than 10 blocks from you.

He was at a pool party. He’d seen his ex for the first time in months and realized he was over her. It set him free. Then he dove in the pool.

Sunday afternoon he messaged and asked where I was. Pacing through SoHo, I typed furiously, trying to forget you. He was home watching "Sex and the City." He didn’t see my note about the gift at the hotel until I was boarding at JFK. Then he blew up, calling me pushy and desperate.

The Wi-Fi wouldn’t connect on the flight home. I switched airplane mode on and off and spilled a whole cup of water on the woman next to me, nearly destroying her iPad. Staring out the window chasing the sunset west, I wondered what had happened, what I’d done.

But he was conciliatory the next day, asking me to stroke his hair. I redeemed an airline credit for July 4th without telling him, tried to persuade myself that it was reasonable to fly across the country for a man who'd refused to meet me.

The hotel called to say he hadn’t picked up the snow globe. They’d hold it till Friday, or ship it back to me.

My editor sighed: “Either it’s a symbol for the whole relationship, or a piece of plastic filled with water.”

Late Thursday, I emailed that the gift was a snow globe and sweetly asked him to call the hotel. I hated resorting to email. On Twitter, on his iPad, he courted graciously. On email, sitting at the desk in his bedroom where we'd had so many charged encounters, he was like someone else entirely.

So now feeling torn between just being an ass and the fact that if I give in now the whole point was moot and I might as well have said yes to everything from moment one.

Lydia took my phone away. We went to sushi and the movies and the playground. A sweet Texan distracted me on Gchat. I stayed off Twitter as long as I could.

I messaged a few nights later. He was cold but asked for advice and we chatted.

On Wednesday I was out celebrating a friend's poetry reading when he sent a goofy message. Did I have time to chat? He’d met someone amazing. On Monday. And already seen her twice.

I thought you should know.

A man so devastated he could barely leave his apartment. A week later, miraculously healed.

I fought with him late into the night, marveling at how his eloquence never suffered.

Switch the gender roles and read the lines of this screenplay back. Then you will see that you overstepped your bounds.

I have never done anything but tease you. It is all I know.

I went back to my life. Somehow this hurt worse than a real breakup. How could I explain we’d never even met?

I cursed him and his new object of desire: may she be prim and inarticulate and a morning person. My friends took me to baseball games and for hikes, and I distracted myself with work. Soon enough he was back online late at night. Occasionally he’d steam up my timeline.

I didn’t mention my trip. He’d figure it out soon enough if he was following my tweets. By my third night in NYC, he got raunchy.

Put your money where your mouth is, I challenged. We fought all weekend. He claimed he had no desire to meet me or take my clothes off. I wasn't buying it.

It is strange that you don't see how unfair it is for you to insist we know each other IRL.

He promised not to flirt anymore if it was too confusing. I wondered what that left. Then he got furious again.

Chris says I need better romantic criteria than impeccable punctuation. “I’m voting for ‘doesn’t exist.’ He couldn’t meet you in Manhattan because he’s an FBI agent in Tennessee, assigned because of Occupy.

“It’s the perfect Turing test. You don’t have any unambiguous, verifiable information about him.”

Sylvie thinks he’s a con man, the snow globe “a completely innocuous lovely gesture. He definitely has something to hide. You were getting close to blowing his cover.

“Relationships are always like this. But the technology amplifies it, enables it to go to a level of deceit and manipulation that wouldn’t be possible in real life.”

And even though I was raised by gamblers, I'm still not sure which part was real. Sean says all good lies have an element of truth in them. It’s flattering to think he doesn’t exist, that he made everything up. Though it seems more likely he wanted a fantasy, not a real woman. Not me. Eileen stands by her swastika on the forehead theory.

I reread his messages for clues and find myself seduced all over again.

So, here I am, bashing around on twitter, trying to avoid the real world

except then you discover that all the lovely, quiet words on the page are really people.

And I read my brave, over-the-top entreaties to a stranger, to take a chance on love.

This is who I’m supposed to be, I tell Eileen. That doe-eyed dreamer.

It’s who you’ve always been, she says.

Diana J. Wynne is a writer, software designer and wanderer. Her stories on travel and politics have appeared in the New York Times, Ms., Raw Story, Pure Slush, Blueprint Review and the Christian Science Monitor. Make her an offer.