An English professor measures the brain activity of readers, and finds we respond differently when reading for fun 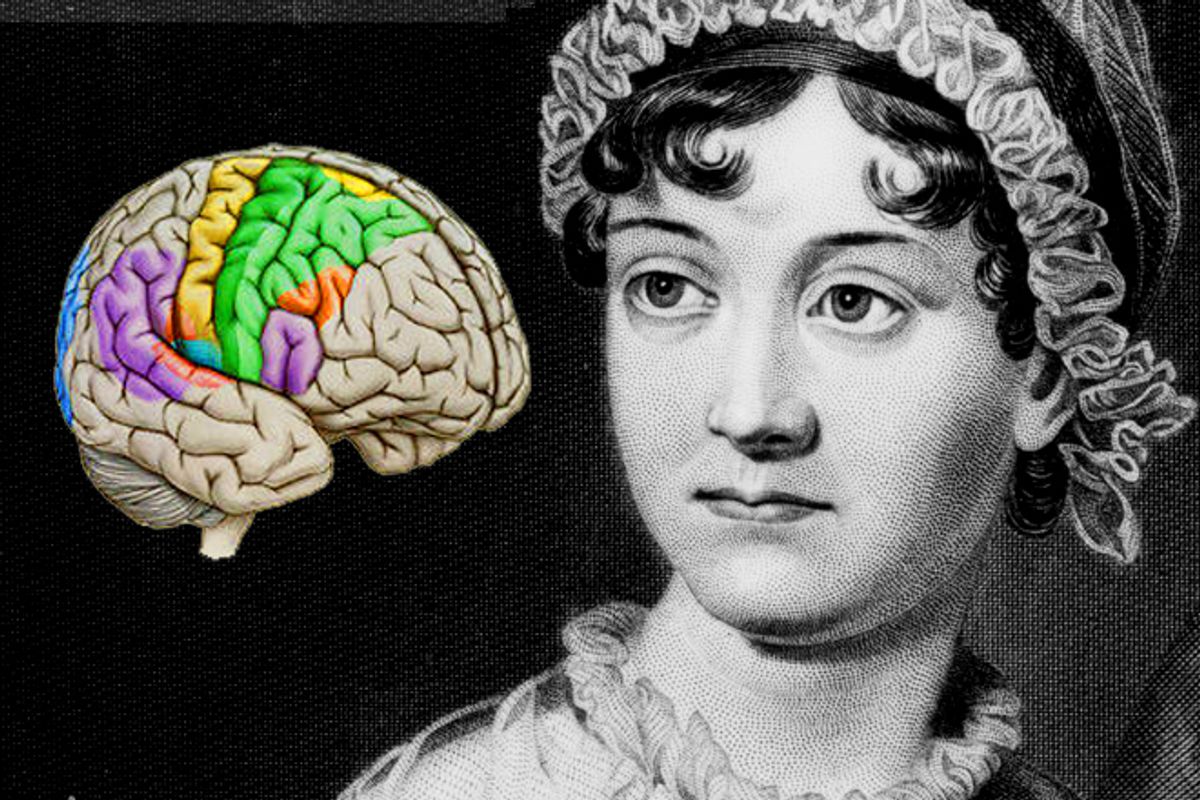 Few freshly minted English professors expect to end up learning how to position people in an fMRI scanner -- that noisy, white, coffin-like medical instrument used to measure blood flow to the brain. Yet that's just what has happened to Natalie Phillips, an assistant professor in the English department at Michigan State University, who is working on a study that originated at the Stanford Humanities Center. The project measured subjects' brain activity as they read chapters from the Jane Austen novel "Mansfield Park," asking that they switch between the relaxed mode of pleasure reading and the more analytic practice known as close reading.

Preliminary results have shown significant differences between the two types of reading, which may not surprise any undergraduate who slacked off on his Milton thesis by reading a James Bond novel. Nevertheless, neuroscientists who have studied such things in the past have rarely distinguished between types of reading or observed subjects engaged in the protracted reading of complex texts. The pioneering research that Phillips and her colleagues at Stanford and Michigan State are doing will provide us with unprecedented information about how our brains accomplish the mysterious and remarkable act of reading a novel. It's early days yet, but I telephoned her recently to find out more.

First of all, can you tell me what exactly your study has measured?

Sure. An fMRI machine measures the flow of blood to different regions of the brain over time. Certain regions of the brain are associated with certain types of activity because we've observed more blood flow to those areas when that activity is going on. We also used eye tracking and monitored the subjects' heart rate and respiration as they read.

How can someone read a book in an MRI machine?

You're lying on your back in the scanner and reading on a mirror right above your eyes, with an eye tracker over one eye. That mirror reflects a screen outside the scanner. It has to be a block of text that's the right size for each person, particularly one that doesn't tempt them to move their head. We divided up the text as closely as we could to Jane Austen's natural paragraph structure and they move through it, at their own speed, by pressing a clicker in their hand. They can reread as much or as little as they normally would, which is great because we can use the eye tracking to get a better sense of what those patterns look like.

And how did you instruct someone to switch from pleasure reading to close reading?

They move through the novel, reading four sections. They read two of those sections closely and two in a more relaxed pleasure reading state. We tell them that pleasure reading is a mode in which you allow yourself to relax and become immersed in a novel -- lose yourself in a book. Close reading is what we teach in the literary classroom, the mode of analyzing the structure and other aspects of the book. To emphasize that in the experiment, we have them leave the scanner and write a short literary essay at the end on the sections that they read closely, as though they were preparing to do this in the literary classroom.

Can I ask why you picked "Mansfield Park"? There are exceptions, of course, but it's typically seen as everyone's least favorite Jane Austen novel.

I know! First, we needed a work of literature that could be read both for pleasure and for complex literary analysis. Jane Austen is one of the few classic authors who can at least fairly reliably provide both for a number of readers. Actually, we began the pilot study with "Persuasion," but we moved to "Mansfield Park" because we needed a work that students would be most likely to have a fresh reading of. Having read something before does influence this stuff. And "Mansfield Park" is in fact the novel that the fewest number of people had already read.

Who were your subjects?

One thing we realized immediately in our pilot is that professors are terrible subjects! So many of us have forgotten how to read for pleasure. It was important to find a population who could do both. Literary Ph.D.s turned out to be perfect for that.

What have you found out so far about pleasure reading and close reading?

In the neuroscience world, it's been more common to change what the subject is reading about (if they're reading anything of length, which has also been rare). They thought that if you asked people to read the same thing in two different ways, you might just see nothing. They're still just reading a chapter from Jane Austen, so why would this change the brain patterns?

I was really surprised and shocked, in a delighted way, by how much of a difference we've been seeing between pleasure and close reading. It was not what we expected.

We're really just processing the data right now, as we speak. One of the things that we saw in the pilot is that it's not just that close reading is a more advanced form of pleasure reading. Pleasure reading also has distinct regions where it has more blood flow. They have two distinct "neurosignatures," a term which describes complex patterns of brain activity that cross multiple regions of the brain. Pleasure reading has its own demands and close reading has its own pleasures. The value resides in being able to shift between modes. It's a training in cognitive flexibility.

Really the biggest surprise to date is just how much the brain is shifting in moving between close reading and pleasure reading. Most people would expect to see pleasure centers activating with the more relaxed style of reading, and the regions associated with work, attention and cognitive load for the literary analysis. But what we're finding is something else entirely. With pleasure reading, at least in the one subject for whom we have been able to fully evaluate it so far, we did see unique regions activated. That suggests that pleasure reading is not just some more lax or dormant state. And we're seeing the whole brain activating for the close reading state.

So not just the parts of the brain that deal with language processing and other higher-level functions?

We're seeing activation in regions you really wouldn't expect, like the somatosensory cortex, an area that we use to position ourselves proprioceptively in space and to process touch. And the motor cortex, which we use for physical activity. Actually, we often use the motor cortex when we read because we tend to sound out the words to ourselves. Even when we aren't speaking, we silently vocalize.

You're gathering a lot of autonomic nervous responses as well, such as heart rate. I can't help wondering how subjects might respond to more visceral fiction -- would you see signs of physical fear in someone reading a scary Stephen King story, for example?

That's where we're hoping to go down the line. The new trend in neuroscience is what they call "functional connectivity," observing changing synchronized brain regions over time, moment to moment. There may be portions of "Mansfield Park" where you'd feel no heart rate change, but there also may be a part where there's a particularly (empathetic) moment, describing Fanny Price's orphan status.

Or anger, when the other characters mistreat her.

Exactly. The ability to get closer to that -- that's why we're so excited to have the respiration and heart rate monitoring with the eye tracking as well as the literary essay, which tells us which parts of the text the subjects remember.

I'm also involved in a very nascent study of poetry reading. There's someone here at MSU who's very interested in rhythmic processing, how we get a sense of rhythm, how our sense of time and attention are influenced by rhythm. They do a lot of work in music cognition. Poetry is such an interesting case because you have to produce that rhythm in your own mind as you're reading. You have to actually create that rhythm yourself. And I'm working with Duke on a possible study of trauma narratives, looking at how different structures for relating a traumatic incident change our empathetic response.

Some people in the humanities might respond to this sort of work with anxiety, worrying that it's a reductive way to approach such a profound cultural experience.

That's why the interdisciplinary aspect of this project -- and I want to acknowledge the many people besides myself who are contributing to it -- is so important. As a humanist, one who can also run an MRI scanner and really understand this work, I find the richness of a literary essay someone writes at the end to be really valuable to look at alongside the other data. It's just like the dense richness of a literary novel by Jane Austen.