Beyond guns and God

A new study finds the white working class is less conservative than we think, if you leave out the South 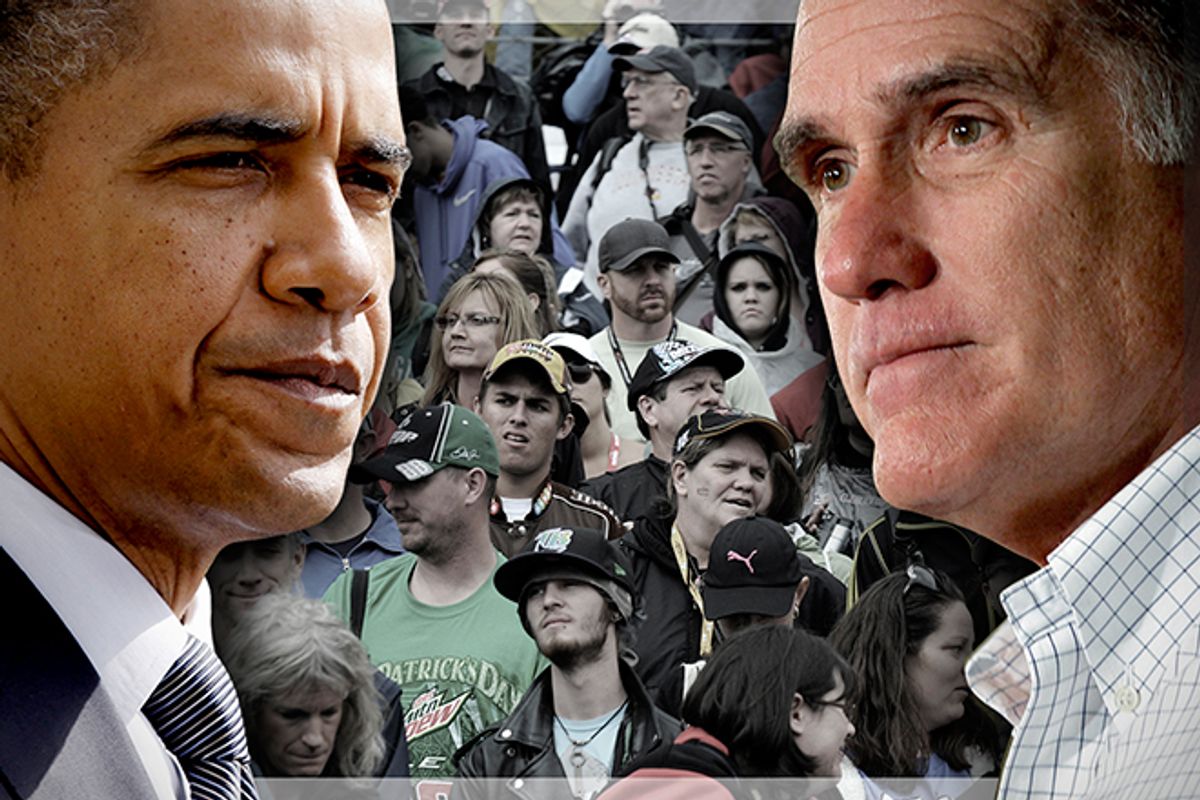 What is "the white working class," that much discussed, often criticized demographic group that many say will decide this election? You know them: They're "bitter" and "cling" to "guns and religion," in the (otherwise sympathetic) words of 2008 candidate Barack Obama. Many are members of "the 47 percent" of Americans dependent on government derided by Mitt Romney, who the Republican insists will vote for Obama – except many don't know they're in that moocher class, and plan to vote for Romney.

Just in time comes a study by the Public Religion Research Institute, which confounds most stereotypes of the white working class, while confirming a couple. It may force us to give up our caricature of the last group of Americans it's still politically safe to caricature. They're less conservative than most political analysts give them credit for – if you leave out the South.

First, a few definitional ground rules. As someone whose book is often described as being "about" the white working class, and why it left the Democratic Party, I'm painfully aware of the limitations of data and definitions of that much-discussed group. This study defines them as "non-Hispanic white Americans without a four-year college degree who hold non-salaried jobs." Some polls define the white working class by income, but increasingly the more politically unique group – and the most politically troublesome for Democrats -- is those without college degrees. Also: This is a new study and it doesn't track the same group over election cycles, so we can't know if their opinions have changed in the age of Obama, but it's fascinating and useful nonetheless.

As most analysts have asserted, they are, as a group, trouble for Obama -- in mid-August Romney led 48-35 -- but there were interesting regional differences. Romney led Obama by a staggering 40 points in the South (62-22) while Obama actually led Romney 44-38 in the Midwest (hello, auto industry rescue?), and the two candidates were nearly tied in the West and Northeast. White working-class Protestants favor Romney 2-1, while Catholics are evenly split. Likewise, Romney clobbers Obama with men, but the candidates are tied for the votes of women. And younger white working-class voters support Obama.

Overall, the study debunks lots of stereotypes: These non-college-educated whites are just about as likely as the college-educated to strongly identify with the Tea Party (13 vs. 10 percent), or to say the group shares their goals (34-31). Only one in 20 say abortion or same-sex marriage is the most important issue deciding their vote. More (50 percent) say abortion should be legal in all or most cases than illegal (45 percent.) Maybe surprisingly (at least to the Catholic bishops), a solid majority (56 percent) of white working-class Catholics think abortion should be legal in all or most cases, while 53 percent of Protestants think it should be illegal in all or most cases. They are just about as religiously observant as college-educated whites, although they are much more likely to identify as evangelical Protestants.

The study also confounds those who believe white working-class voters consistently vote against their own economic interests: Those who received food stamps in the last two years preferred Obama to Romney 48 to 36 percent, while two-thirds of those who hadn't preferred Romney.

Oh, and this is fun: "Equal numbers of white working-class Americans (28 percent) and white college-educated Americans (27 percent) identify Fox News as their most trusted media source."

The study finds, however, that a few of our political stereotypes are true: They are more likely than college-educated whites to say the government does too much for minorities and that discrimination against whites is as big a problem as discrimination against blacks, although, again, if you take out the South, the percentages drop. They are more likely than white college-educated voters to blame illegal immigration for their economic problems. They oppose same-sex marriage, but not overwhelmingly, 50 to 43 percent, and there again, there are huge differences by region, religion age and gender: Women, non-Southerners, Catholics and younger white working-class people favor same-sex marriage, while older Southern male Protestants oppose it.

I'm going to be honest: I like this study because it confirms all of my instincts (which, to be fair to me, are based on research and familiarity with actual white working-class people). It completely contradicts Charles Murray and the rest of the conservatives who define struggling white workers as part of the moocher class, people who've traded hard work, marriage and religious devotion for the dole: They work more hours (an average of 51 hours to 46 for the college educated). They are just as likely as college grads to call themselves religious.  They are more likely to be divorced or to have children "out of wedlock," but the study concludes (as I do) that's because of economic distress, rather than the other way around, as Murray asserts.

And rather than believe they can depend on government, they are alienated from government: Interestingly, more college-educated whites than working-class whites refer to the government as "our" government than "the" government. Yet they are overwhelmingly open to a Democratic message. From the study:

There is some good news for Romney hidden in the tabs and back pages of the survey. For one thing, it's possible that his disdain for "the 47 percent" of Americans who pay no federal income taxes, or who rely on some sort of government support, may not hurt him (although I believe it will). PRRI finds that even Americans who rely on government services still believe that people are too dependent on government: 71 percemt who've received unemployment benefits  and 63 percent of those who’ve received food stamps in the last two years say poor people have become too dependent on government assistance programs.  It's certainly possible that in November, many will vote for the candidate who agrees.

I'm not quite sure what to do with the data saying they are more likely to believe the government favors minorities, or that discrimination against whites is as big a problem as against blacks today. The latter is simply not borne out by any study anywhere. (Again, answers to those questions differ hugely by region, age and gender.)  And yet I think, given the rest of the survey results, maybe we can treat that attitude with some empathy, whether or not it's born out by facts. As other surveys have shown, PRRI finds that working-class whites are more pessimistic about the future than any other economic or racial group.

Yet as I've said before, non-college-educated whites are more open to the Democratic message than they've been for a while. Barack Obama got a higher share of their votes than white Democrats John Kerry, Al Gore, Michael Dukakis, Walter Mondale or Southerner Jimmy Carter (in his second term), according to exit poll information provided to me by the study's sponsors, Robert Jones and Dan Cox (admittedly this is not exactly the same demographic they studied in 2012). Just as Republicans need to learn not to stereotype and write off vast swaths of the electorate, Democrats might need to think differently about the white middle class.