Desperate times call for desperate measures. Some of these projects are far-fetched; others may come to fruition 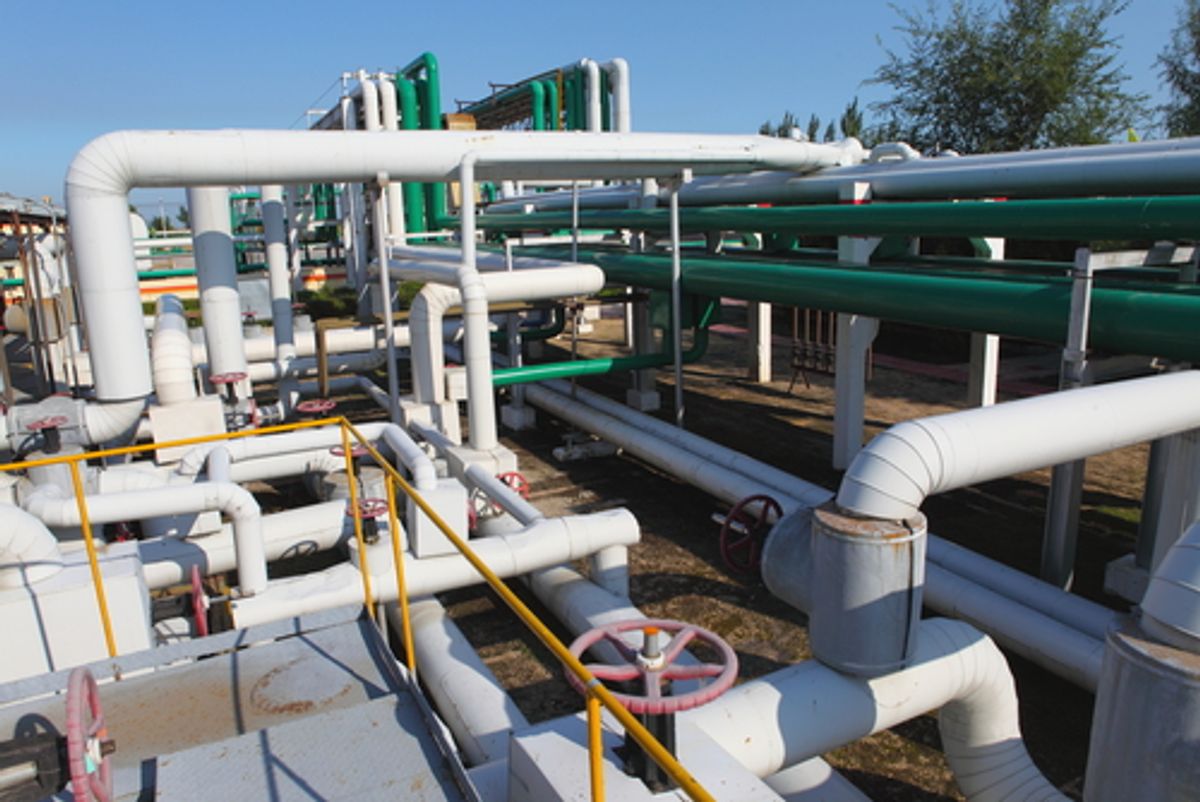 For decades Canadians have lived with a fear that the U.S. will come for their plentiful freshwater. Perhaps not in the form of armed soldiers crossing the border with empty buckets, but through trade agreements and corporate shenanigans. With each U.S. drought, our northern neighbors grow more wary. George W. Bush fanned the flames in 2001 when he told reporters that he wanted to talk to Ottawa about water exports for Texas. And over the years three major Canadian-US export projects were planned (more on that below).

Although we haven’t raided Canada’s hydrologic treasure chest yet, large water transfers across countries, states and watersheds are commonplace. The great hand of politics usually plays a major role in many of these interbasin transfers. The Los Angeles Aqueduct (of Chinatown infamy) may be one of the most well-known in recent U.S. history, as its construction (and backroom politicking) destroyed the farming community of Owens Valley.

As our water pressures increase with population growth, climate change pressures, development and pollution we may well see more of these projects. Here are some that are on the table currently —  some of them are far-fetched and some may actually come to fruition. After a summer where over half the country was in drought, one has to wonder if desperate times will indeed call for such desperate measures.

Las Vegas has become the poster child for water scarcity in the U.S. The manmade oasis in the desert seems to embody water opulence — giant fountains, green lawns, golf courses, outside misters, canals. All the while estimates say the metropolis’s water source — Colorado River water stored behind Hoover Dam in Lake Mead — is running low. In the next few decades it is possible that Las Vegas’ intake pipes in the lake, which supply 90 percent of the city’s water, may be sucking air.

To be fair, Las Vegas has implemented some water conservation measures: water re-use for businesses and turf removal programs to get folks to give up their lawns. But southern Nevada is still bent on growth, growth, growth. And that means more water.

A multi-billion-dollar project, which some estimates put as high as $15 billion, would allow the Southern Nevada Water Authority to pump groundwater from four rural valleys in eastern Nevada and pipe the water nearly 300 miles to Sin City and its environs.

As Phoebe Sweet wrote for the Las Vegas Sun, “Opponents say the effects of the pumping would be devastating and that the plan would sacrifice a rural, ranching way of life in Eastern Nevada for casinos and tract homes in the south.”

The area targeted for the massive pumping proposal is home to National Wildlife Refuges in Nevada and Utah, important state wildlife management areas, Native American communities and dozens of small, rural agricultural communities who have been living in balance with the limited water supplies of the region for over a century. Great Basin National Park is surrounded by the proposed groundwater pump and export project.

In August after the Environmental Impact Statement came in, the Salt Lake Tribune reported that, “The federal Bureau of Land Management appears poised to grant the Southern Nevada Water Authority (SNWA) rights of way that would allow the pumping of ground water from four eastern Nevada valleys for transport via pipeline to Las Vegas.”

It’s beginning to look like Owens Valley all over again.

The only thing making parts of the desert Southwest livable is the vast plumbing network we’ve concocted. And apparently we’re not done yet. It’s not just the Las Vegas region that is hell-bent on growth, but so are parts of neighboring Utah around the town of St. George in Washington County.

In 2006 Utah’s legislature approved a pipeline that would tap Lake Powell and send the water over 130 miles to Utah’s Washington, Kane and Iron counties. The decision was spurred by population growth. As Amy Joi O'Donoghue wrote for the Desert News:

St. George, in particular, was growing like non-native weeds out of control. For a one-year period from 2005 to 2006, the St. George metro area was the fastest growing in the country, according to the U.S. Census. The following year it ranked second, with 70 percent of the growth attributed to newcomers.

But critics of the pipeline say that population growth has slowed. O’Donoghue writes:

Then, the economic tempest hit, pushing families into bankruptcy, into the unemployment lines and out of their homes. St. George, Utah's golden girl of growth, wasn't immune, and neither was the state budget.

Eric Millis, deputy director of the Utah Division of Water Resource, figures the recession threw plans for the pipeline into a three-year delay, but the economic crisis has not erased any of [Ron] Thompson's [whose job it is to supply water to Washington County] doggedness in his pursuit of the pipeline, or that of other supporters.

Thompson and others with state water resources believe even with the slowdown in growth, the pipeline will be needed in the next 15 to 20 years.

Pipeline proponents have another issue to worry about though. Like nearby Lake Mead, Lake Powell may not have enough water for more thirsty consumers. As the Salt Lake Tribune reports:

The Lake Powell pipeline to Kanab and St. George would cost about $1 billion, and supporters are looking for a loan from the state to build it. But the Natural Resources Defense Council, in a report released Wednesday, say the Colorado River is already overextended — and likely will lose water to climate change, according to government scientists.

Even as existing Southwestern water users frequently drain the river before it reaches the Sea of Cortez, the Bureau of Reclamation predicts a 9 percent decline in the basin’s water by mid-century.

A billion dollars later, there may be a new pipeline for Utah, but nothing to put in it.

In a guest commentary two years ago in the Denver Post, John M. Barbieri and Deborah A. Palmieri suggested that Russia can and should aid the drying American west. With vast water resources, Babrieri and Palmieri say that Russia is “poised to become a major exporter.” And that the U.S. and Russia “should harness the ingenuity, technology and resources necessary to transfer water from remote locations to a thirsty world, including to the U.S. west coast.”

The key to linking Colorado's water needs and Russia's water surplus is through ocean transportation, which already carries over 95 percent of world trade. Russian water would be delivered to southern California. This new source for California, which has long exceeded its legal allocation of Colorado River water, would allow The Golden State to relinquish supplies long "borrowed" from other user states, including Colorado. This type of land-based "water transfer" is commonplace throughout the western United States today.

Sounds like this may be a little hard to pull off? Don’t worry, it’s already in the works. Almost. They write:

The seeds of this future growth have already been laid. Alcoa, America's aluminum giant, recently made a massive investment in Russia's shipyard industry aimed at making marine transportation more energy efficient. Governments, private industry and university researchers are developing lightweight composite materials that one day will allow large volumes of water to be shipped great distances.

America's defense and aerospace companies can help also by applying their experience in developing advanced materials for construction, honed over decades on the cutting edge of U.S. space and defense programs, to the maritime sector of the economy. Northrop Grumman and General Dynamics already own large shipyards capable of building advanced water tankers for the emerging world water trade.

So, as long as our military contractors abandon the war machine for water, we can seal the deal. Wait, is this a trap?

French engineer Georges Mougin is a big thinker. Especially when it comes to our global water crisis. As Fast Company reports:

There are 1.1 billion people in the world without clean drinking water. Meanwhile, billions of gallons of freshwater disappears uselessly into the ocean, the result of icebergs that break off from the ice caps of Greenland and melt into the salty mix.

Do you spot an inefficiency in the system here?

So did French engineer Georges Mougin. And that's why he's invented a system for towing icebergs across the ocean and straight to the world's thirsty. Using 3-D technology, recently declassified satellite data, and the new science of oceanic forecasting, Mougin has created an elaborate method for hauling ginormous icebergs using a "skirt" and a tugboat.

Mougin has been working on this idea for 35 years ... so far it doesn’t really work yet. But maybe soon. Maybe.

Our friends up north do have reason to worry. Over the last 40 years, there have been three major purported schemes to tap Canada. The first targeted the western regions. As Tony Clarke wrote for the Canadian NGO Polaris:

North American Water and Power Alliance. NAWAPA was originally designed to bring bulk water from Alaska and northern British Columbia for delivery to 35 U.S. States. By building a series of large dams, the northward flow of the Yukon, Peace, Liard  and a host of other rivers [Tanana, Copper, Skeena, Bella Coola, Dean, Chilcotin, and Fraser ] would be reversed to move southward and pumped into the Rocky Mountain Trench where the water would be trapped in a giant reservoir approximately 800 kilometers long. A canal would then be built to take the water southward into Washington state where it would be channeled through existing canals and pipelines to supply freshwater for customers in 35 states.

Then there was the possibility of water from the central part of the country. As Clarke explains:

In 1968, the Washington State Resource Center developed plans for the Central North American Water Project [CeNAWAP]. The plan calls for a series of canals and pumping stations linking Great Bear Lake and Great Slave Lake in the NWT to Lake Athabaska and lake Winnipeg and then the Great Lakes for bulk water exports to the U.S.

Further east the Great Recycling and Northern Development (GRAND) Canal would have damned and diverted rivers in Quebec to the Great Lakes and then to our midwestern states. “A dike would be built across James Bay at the mouth of Hudson Bay [whose natural flow is northward], thereby turning the bay into a giant fresh water reservoir of about thirty thousand square miles from James Bay and the 20 rivers that flow into it,” writes Clarke. “Through a system of dikes, canals, dams, power plants and locks, the water would then be diverted from the reservoir and rerouted southward down a 167 mile canal, at a rate of about 282,000 liters a second into two of the Great Lakes --- Lake Superior and Lake Huron. From there, the water would be flushed through canals into markets in both the American Midwest and U.S. Sun Belt.”

So far Canada has thwarted all our attempts to suck the country dry, but that doesn’t mean we won’t try again when the going gets tougher.