Pick of the week: An all-time cop-movie classic

Pick of the week: Jake Gyllenhaal and Michael Peña take on East L.A. in the dark, thrilling "End of Watch" 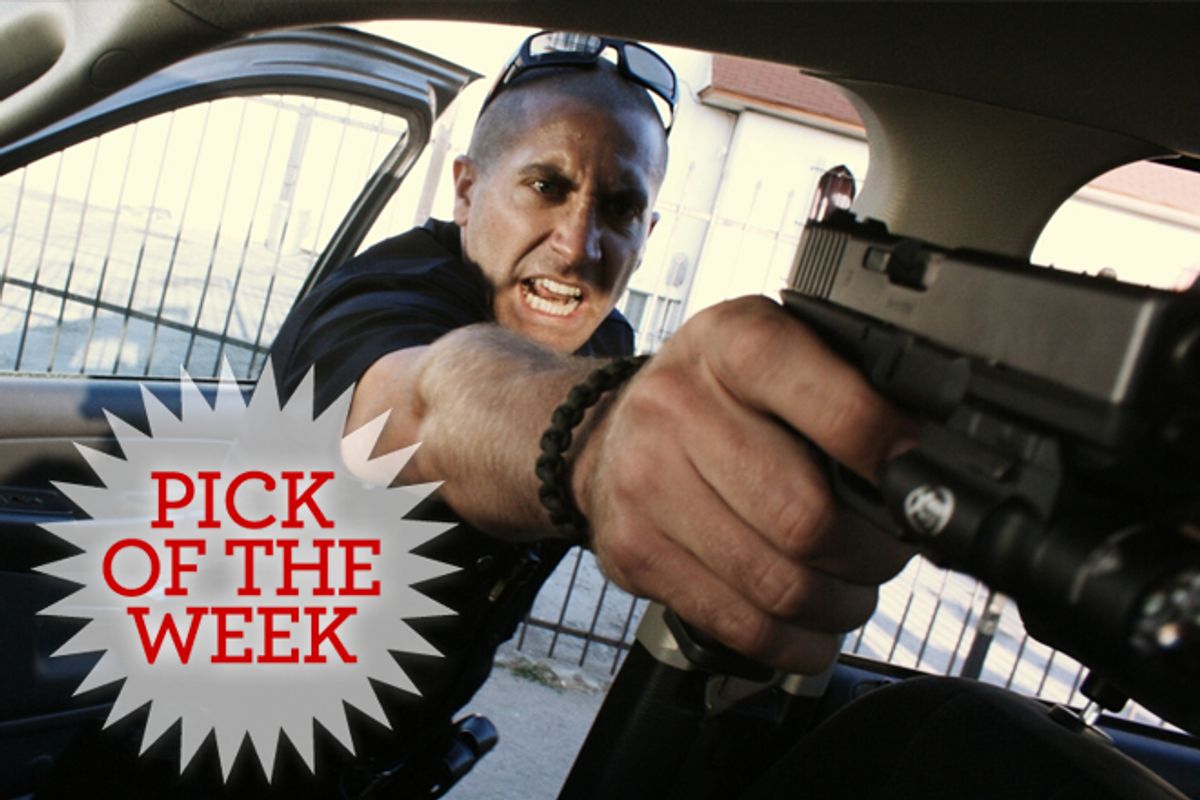 Jake Gyllenhaal in "End of Watch"
--

Cop movies, and specifically Los Angeles cop movies – set against that vast, horizontal landscape of blue skies, palm trees and crap two-story architecture – are such a vital part of American cinema that I didn’t realize how much I missed them until the void was suddenly filled. “End of Watch,” the electrical, pulse-pounding new action drama from cop-obsessed writer and director David Ayer, will no doubt be presented in certain quarters as pro-LAPD propaganda – or, if you prefer this phrasing, as a paean to heroism and patriotism in the face of lawlessness and disorder. I’m not much interested in those interpretations, which try to boil down this mythic, thrilling and brilliantly made motion picture to a political point system. It’s at least the best cop movie since James Gray’s “We Own the Night,” and very likely since Antoine Fuqua’s memorable “Training Day” (which, not coincidentally, was written by Ayer).

I’m not claiming that political and social questions are irrelevant when it comes to a movie set inside America’s most notorious big-city police department. They can’t be. But those things are not the purview of Brian Taylor (Jake Gyllenhaal) and Mike Zavala (Michael Peña), the knights in blue whose odyssey into deepening violent nightmare forms the narrative of “End of Watch.” Ayer tips his hand on this, about as much as he could, in an opening monologue delivered by Gyllenhaal on top of a hair-raising chase scene, viewed from the surveillance cam of Taylor and Zavala’s black-and-white. “I am the police, and I will arrest you,” Taylor intones. He is an inexorable force, he goes on, whose task is to enforce laws he did not make and may not agree with, using whatever degree of force is necessary and with zero regard for the reasons – good or bad, understandable or not – why someone may have violated them.

A muscular charmer with a shaved head, faint intellectual pretensions and a reputation as a ladykiller, Taylor also knows when he’s out of his depth. “Look, I’m just a ghetto street cop,” he tells a mysterious federal agent carrying an assault rifle at one point. This is just after Taylor and Zavala have blundered into an East L.A. house and busted an ultra-sinister Sinaloa cartel hitman who is babysitting a cage full of filthy and dehydrated illegal immigrants. What the federale tells them, not in so many words, is that they were screwed before and they’re double-screwed now, and that some of the scariest criminals in the world want to kill them. Being ghetto street cops, Taylor and Zavala pretty much shrug this off: Scary people want to kill us every day, dude.

One way of explaining the social context of “End of Watch” is to say that it’s a war movie in all but name, and as in, say, “Full Metal Jacket” or “The Hurt Locker,” the question of whether the war is worth waging in the first place hovers over the whole enterprise, but is never directly asked, let alone answered. If Ayer relies a little too much on the 21st-century premise that everyone in “End of Watch” is shooting their own videos – Taylor inside the police cruiser, the posse of heavily armed Latino gangbangers in their stolen minivan, the participants at a backyard African-American barbecue as it gets shot up – there’s no disputing the formal ingenuity of this movie or its breakneck forward momentum. (The cinematography is by Roman Vasyanov, who shot the delightful Russian musical “Hipsters.”) Beneath their studied casualness, macho bluster and chops-busting repartee, Taylor and Zavala are conscious of the mounting and imminent menace in every moment. While Zavala exchanges chitchat out the car window with a guy on the street, only we can see that he has his sidearm drawn and pressed against the door, just below the other guy’s line of sight.

Gyllenhaal has already shown tremendous range as an adult actor, way beyond what could have been predicted from his “Donnie Darko” youth. While I think he was terrific, for example, as the feckless male lead in the underperforming rom-com “Love and Other Drugs,” his performance here as Taylor might be his best since “Brokeback Mountain,” and pushes into a new direction. Taylor is a practical joker and a bit of a cowboy, whose Achilles heel as a cop is his headstrong, ambitious nature – exactly what makes him so appealing. He has wonderful chemistry with Peña, who has spent his whole career (or so it seems) playing upright Latino cops, but never one as complicated and well-developed as Zavala. His self-assigned role is to be the more level-headed of the duo, the straight man who feeds Taylor his gag lines, the married man who has to convince his wayward bro that his latest girlfriend, Janet (Anna Kendrick), is the for-sure, must-marry real deal and not just another you-know-what.

And yes, marvelous to tell, this is not a movie about crooked or dirty cops. We in fact don’t meet any of those, not even Taylor and Zavala’s embittered and misanthropic nemesis, Van Hauser (David Harbour), whose LAPD career is about to end in especially ghoulish fashion. As for our two heroes, they frequently engage in homophobic and/or homoerotic banter and childish pranks, and occasionally fudge the boundaries of by-the-books police procedure. But we never see them take a bribe or shoot an unarmed civilian or harass somebody just for being black or brown. (This is East L.A., where that describes roughly 100 percent of the population.) They’re trying to do the job they’ve been assigned to do as best they can, and as in those war movies I mentioned above, that task is slowly sucking them down into hell.

I think understanding the mythic or even poetic character of “End of Watch,” as it goes beyond gritty and realistic violence into a zone where Hieronymus Bosch collides with Dante, is crucial to getting a handle, for example, on Ayer’s stereotypical depiction of the Latino gangsters who are stalking Taylor and Zavala. It isn’t that having a Mexican-American hero who’s bereft of prison tattoos and weird facial hair inoculates him against charges of racism. It’s more that the posse of hoods – including, imaginatively, a couple of super-hard-ass lesbian gunslingers – who’ve taken on the Sinaloa cartel’s contract on Taylor and Zavala are meant to be demonic rather than human.

At the end of every quest in literary history, the heroes are subjected to a final test to prove their courage, their morality and their loyalty, and so it is on the hallucinatory climax of “End of Watch,” when our blue-clad warriors are lured into a catastrophic ambush. We may well wonder what the point was, as the gunsmoke fades from a back alley where poorly disciplined hotheads in blue shirts and bulletproof vests represent the last, fading vestige of the social contract. If David Ayer knows, he isn’t telling.