Reviews of the new iPhone Maps are horrible. Would Steve Jobs have allowed such a dud? 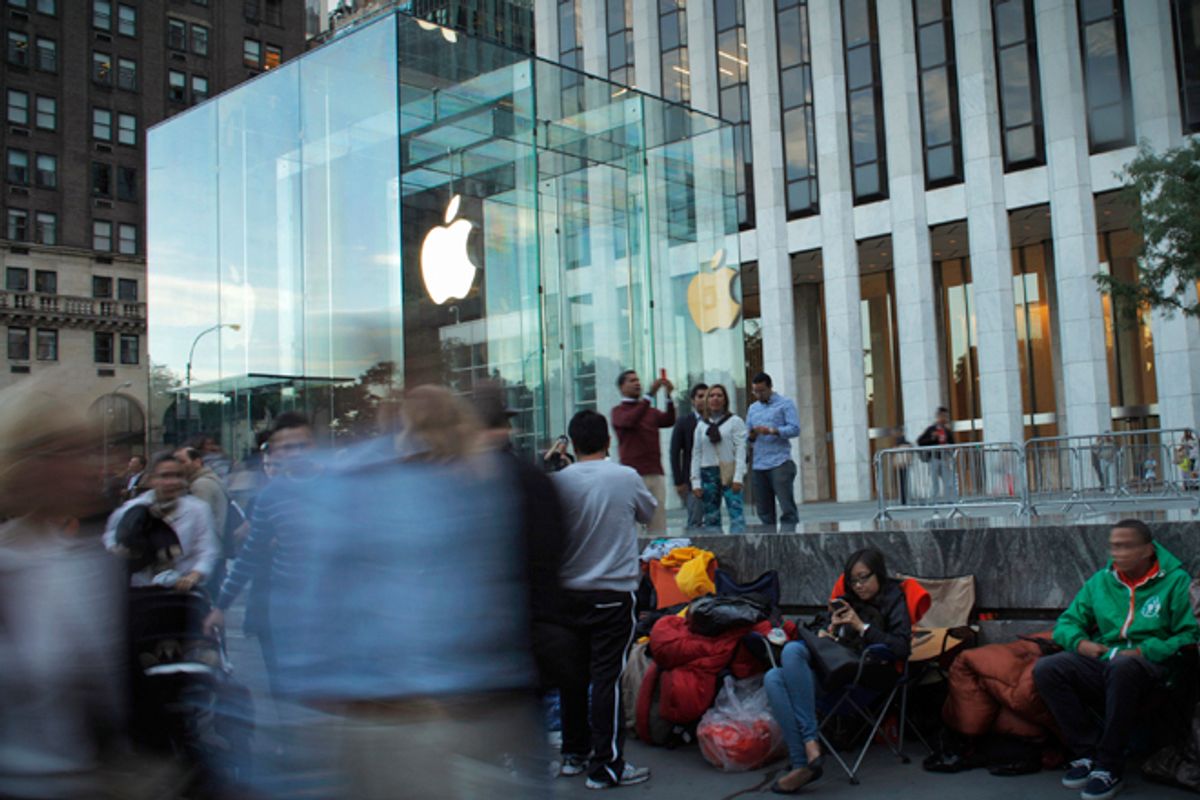 Customers wait in line outside the Apple store on 5th Avenue, for Friday's iPhone 5 models to go on sale, in New York, September 19, 2012. (Reuters/Eduardo Munoz)
--

I knew exactly what I wanted -- an 11-inch MacBook Air for my departing-to-college daughter. I was ably assisted in the purchase by a bright young woman. When she asked me if I had any proof of my daughter's college student status, so as to qualify for a discount, I was able to pull up a billing email on my iPhone that satisfied her. I didn't have to stand in line -- she rang me up (although I daresay such archaic terminology is hardly appropriate to the Apple checkout experience) right in front of the table upon which the MacBook Airs rested, in all their aerodynamic glory.

It was all going so well. But then, as we waited for my credit card number to clear, she asked me if I had upgraded my iPhone to Apple's newest mobile operating system, iOS 6. Her implication was that if I hadn't yet made this happy transition to a higher stage of karmic-Appleness, I certainly shouldn't waste any time rectifying my lapse. Actually, I told her, I had not. I explained that I was a little alarmed by all the negative reviews that had been showering down upon Apple's unilaterally imposed replacement for the Google Maps app.

It was as if a flock of airborne Nazgul had been sighted zeroing in on Fourth Street. A pall fell over the Apple store. Until that moment, I had been the perfect Apple customer -- armed with my iPhone 4S, purchasing a Macbook Air, able to effortlessly summon University of California billing emails from the cloud. But now I was a heretic.

She smiled brightly, as she was no doubt trained to do when faced with an apostate unbeliever. "Oh, let's not worry about the reviews!" she said. "Tell me, what do you use Maps for?"

"Well, it'll get better! You know, you have to start somewhere. Apple Maps will improve! We'll add more features as we go along."

"Yeah, but I use Google Maps every day. And there are all these reports of incorrect data, wrong addresses, wrong directions. Why would I want to replace an app with something that seems obviously inferior to what I am accustomed to using?"

She continued to smile brightly, even as I began to fear that the ghost of Steve Jobs would soon come boiling out of the nearest iPad and shrivel me into Nano-dust with his holy ire.

"It may have some glitches now, but it'll get better," she repeated. "You have to start somewhere, right?"

I realized, immediately, that there was not going to be a rational exchange of views as to potential iPhone operating system faults as we stood there in the House of Apple. We would have to agree to disagree. Shortly thereafter, our transaction was completed, and I left the store, on my way to deliver Air-glee to my daughter. (And that mission, I am happy to say, was accomplished.)

But I felt a little queasy. There was now a stain on my pilgrimage. I may be guilty here and there of rants that get the fanboys all agitated, but for years I have had nothing but respect for the quality of Apple products.

One reason for this is that they work. In fact, one of the things I have loved most about my iPhone is its amazing integration of Google Maps. Seriously, of all the perks of modern computing that I've come to enjoy since my first tap on the keyboard, nothing has seemed more magical to me than the ability to figure out where I am and where I need to go -- wherever I am. It is science fiction incarnate. It has resulted in clear improvements in my quality of life.

To think that that experience might be sullied in the least bit -- well, it's enough to make me pause before upgrading -- and that's a first with Apple in recent years. And I really have to agree with a common theme to the Apple Maps critiques that have been popping up all over the Web. Steve Jobs would never have let the iPhone 5 ship with such a half-baked piece of software. I fully understand the strategic goal of shaking off dependence on Google, but this kind of bungled roll-out is a worrisome sign of post Jobsian decline.

Perhaps most alarming is this notion that Apple Maps will get better as it moves along. Sure, that's a truism about software development. The bugs will get ironed out, eventually. I have no doubt that Apple will devote enough resources to the job to get it done. Google Maps has had its own glitches and failures through the years. But that's not what makes Apple special. Apple products are supposed to just work.

Paradoxically, my visit to the Apple store suggested that even as some cracks in the legacy of Jobs have begun to appear, the arrogance that he bequeathed to his company, visible at every level, from CEO to retail store clerk, is intact.

Arrogance is fine, when you deliver the goods. But when you start delivering flawed products for strategic reasons (let's call that "the Microsoft way"), you run the risk of undermining the trust that has people lining up to buy millions of iPhones within hours of their release. People like me might start to hit the pause button, and wonder whether maybe it's finally time to check out that Samsung.