... in an episode of "Parks and Recreation" that was suprisingly critical of Washington 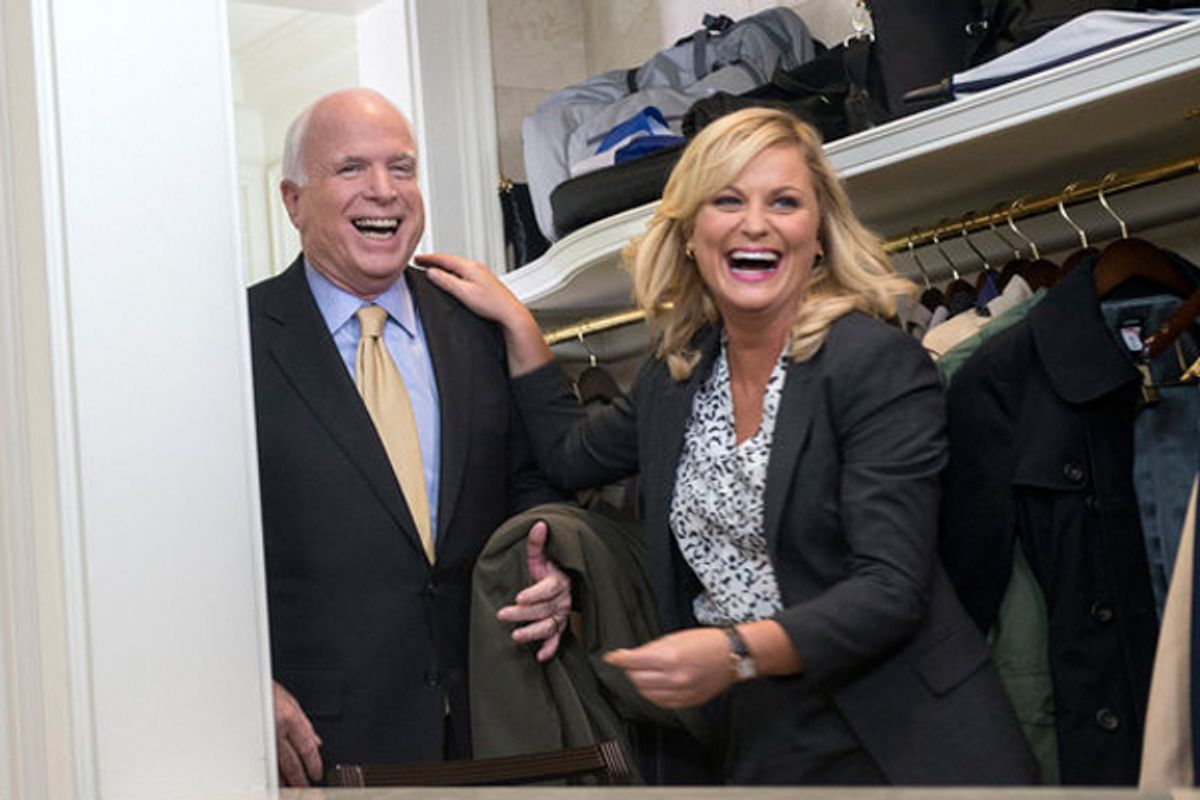 “Parks and Recreation” kicked off its fifth season with its much-heralded spin on the celebrity cameo: Sens. Barbara Boxer, Olympia Snowe and John McCain appearing, briefly, as themselves. The senators were game — John McCain even acquiesced to a little ribbing — but the most notable thing about their guest spots was that they occurred in an episode critical of the “stupid swamp town” of D.C. and the bureaucratic federal government. In “Parks'” beguiling, understated way, the season premiere was a Washington smackdown.

Leslie arrived in D.C. with a two-pronged mission, to see her boo Ben Wyatt, hard at work on a congressional political campaign, and to try to get federal funding to clean up the Pawnee River. Neither was successful. Ben, swamped with work, had to leave Leslie to fanatically visit tourist attractions by her lonesome. The Department of the Interior official Leslie had scheduled a face to face with blew her off. Leslie was forced to leave her meticulously assembled grant proposal — with a CD inside! — in a bin with all the other proposals, as likely to be read as a piece of junk mail.

Then at a swanky D.C. party -- where two tall brunettes who worked in politics dropped insider tidbits like, “They say it will pass, but we’ll only get $400 million instead of 900 million,” as though $500 million were actually $5 -- Leslie was condescended to about her role in local government. “Local government is so important!” the underminer wearing blue said. “My grandmother is on the city council in her town. Gives her a reason to leave the house!” Sunny, indefatigable Leslie Knope narrowed her eyes and looked ready to hiss.

Disappointed, exhausted and recently mistaken for Beverly D’Angelo, Leslie was finally introduced to smiling Sens. Boxer and Snowe (oddly wearing the same colors as those two nasty brunettes). The senators were asked to do little more than they would if speaking to a verbose constituent. A flustered Leslie thanked them— “I just wanted to say that you are my role models, and you are incredibly amazing women, and it is an honor to meet you, and I really respect your grace under pressure, and thank you for you time” — before fleeing in tears. The only singular beat came when Snowe shrugged her shoulders to Boxer as if to say, “What’s that chick’s deal?” (Actually, someone make a gif of that.) Soon thereafter, crying in the coat room, Leslie told McCain to go away: “I would like you to just leave. Some people have no respect for personal space.” He obliged.

At episode’s end, back in Pawnee, Leslie (and her adorable red galoshes) made an announcement by the banks of the dirty Pawnee River. "I went to our nation's capital this weekend," Leslie said. "But things move pretty slow in Washington ... I'm going to clean up this river by myself." She then invited anyone who wanted to speak with her to come to her office hours, Saturday mornings by the riverside, a pointed reference given that the government official she’d hoped to meet in Washington didn’t even have office hours. On her trip to D.C., Leslie Knope might have met some senators, but mostly she learned that she, and her town, were better off doing things for themselves.