By the end of her first debate with Scott Brown, she learned how to hit him where it hurts 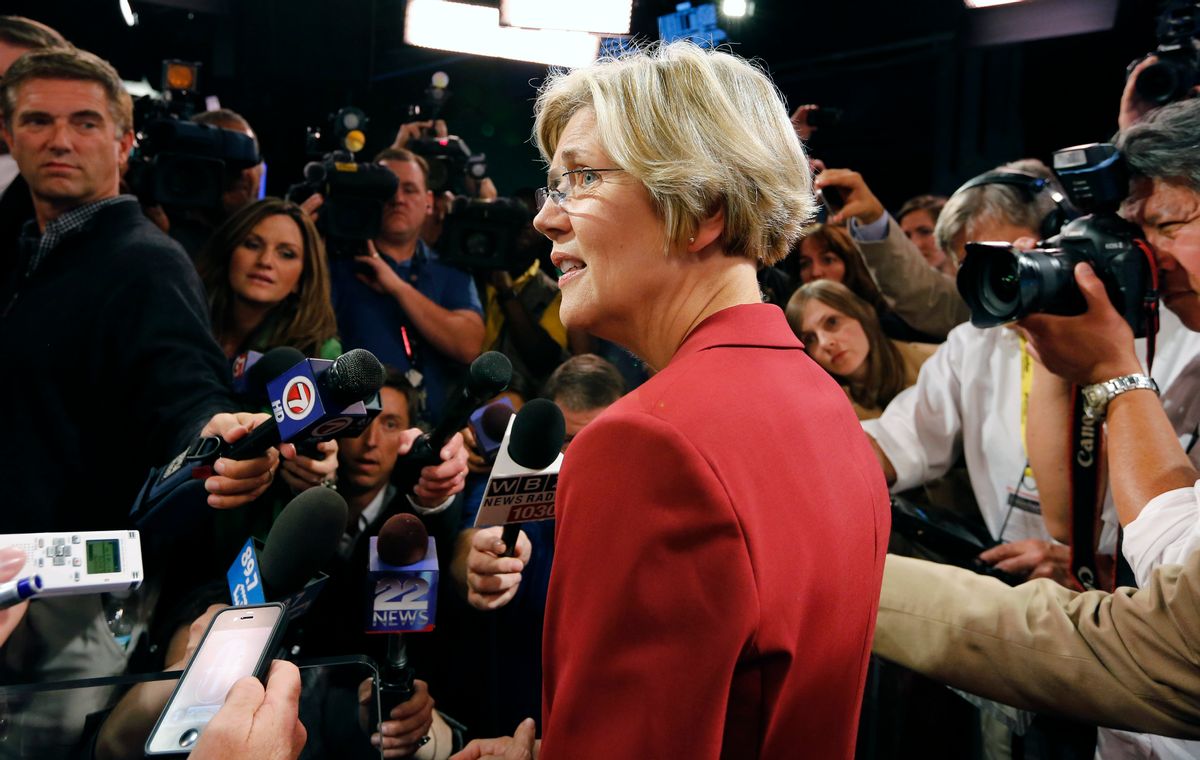 Earlier this week, I swore off making sweeping pronouncements about the direction of the Massachusetts Senate race between Scott Brown and Elizabeth Warren, which is probably a good thing, since I don’t think their first debate last night moved the needle dramatically for either candidate.

That said, however, I would give a slight edge to Brown, and the reason is simple: He was more disciplined in using the hour to advance his basic strategic goal than she was.

When you boil it down, Brown is running a campaign that’s rooted in personality – the regular guy with a truck versus the far-left academic elite. Warren’s, on the other hand, is rooted in party identity: You may like Senator Brown a lot, but if you send him back to Washington he’ll empower a national Republican Party that you hate. For most of the debate, Brown seemed much more aware of his imperative than Warren.

For instance, it took him approximately eight seconds to refer to his opponent as “Professor Warren,” a title he would invoke dozens of times over the next 60 minutes, as in: “Professor Warren, in her case, makes over $300,000 to teach one class.” It was no shock he did this, but I was somewhat surprised that Warren didn’t show up with some kind of humorous rejoinder at the ready, something that might have thrown Brown off his game or at least made viewers more conscious of the game he was playing.

I also doubt much damage was inflicted on Brown in the first half of the debate, in which tax policy and women’s issues featured prominently. Warren repeatedly brought up Brown’s Senate votes – against a plan to extend the Bush tax rates for all but the top 2 percent of income-earners, for the Blunt amendment – and on the substance, she was right. But Brown protested that “Professor Warren” was making things up, that “independent” groups (in reality, the not so independent Chamber of Commerce and National Federation of Independent Business) had called her the real tax-hiker in the race, and that he’s just as pro-choice as she is. How much of this back-and-forth sounds like incomprehensible noise to casual viewers? A lot, is my guess.

Warren’s problem in this stretch was that she didn’t more explicitly link Brown to Mitt Romney and the national Republican Party, and herself to the president. Barack Obama is going to carry Massachusetts by somewhere between 20 and 30 points – maybe more, if things really break his way. The state’s aversion to the national GOP – it hasn’t elected a Republican House member since 1994, and Brown was the first from his party to win a Senate race since 1972 – is Warren’s chief asset in this race. Basically, she’s trying to replicate what John Kerry did in 1996, when he held off the personally popular Bill Weld in Bill Clinton’s reelection year.

Weld and Kerry staged a series of memorable debates that year, and Kerry was dogged about linking his opponent to Jesse Helms and other Washington Republicans whose names were dirt in the Bay State. But Warren was much more hesitant to do so, at least in the early-going last night. Her attacks on Brown’s votes might have been more effective if she’d framed them in more explicitly partisan terms – he sided with Mitch McConnell and the obstructionist Republicans in the Senate against President Obama’s plan to lower taxes for all but the top 2 percent! Or something like that.

To her credit, Warren seemed to figure this out in the final stretch of the debate, linking herself to Obama a few times and even mentioning Romney. She used a question about energy to point out that a Brown victory might allow climate change denier Jim Inhofe to chair the committee that oversees the Environmental Protection Agency. Brown protested that he’s his own man, but Warren seemed to sense that she’d found a winning theme, and repeated it several times.

With only seconds left in the debate, she was given the last word. “But remember,” she said, “at the end of the day, this race may be for control of the Senate. Senator Brown can’t have it both ways. He’s out there raising from Republicans all around the country, saying, ‘If you give me money and I win, it means Republicans can take control of the United States Senate.’”

I bet we’ll hear a lot more of this from her when the candidates meet again in 10 days.