As a busy mom, I thought they would be so convenient. But one little vowel made a huge difference in my self-esteem 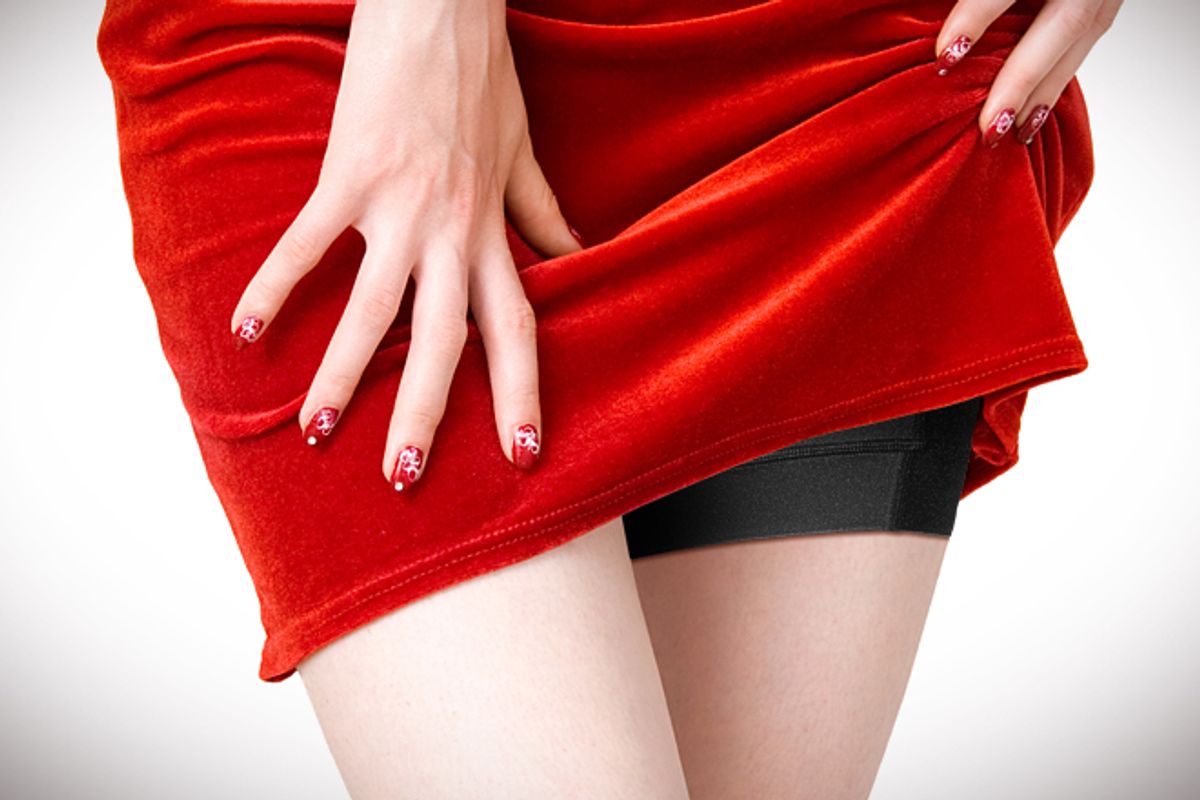 Last spring I noticed another mother at the park wearing a lightweight, gray, A-line skirt that hit just above her knee.  She had my build -- 13-year-old boy from the waist up, prodigiously gifted in the hip department -- but she looked happy. At ease. Must be the skirt, I thought, and approached:

“Do you mind me asking where you found that skirt?”

“Oh, it’s not a skirt,” she said. “It’s a skort. There are shorts under here. It doesn’t wrinkle, and it doesn’t stain.”

By jove, the woman had full coverage! That explained her smile. And such an intriguing concept, this wicking fabric. I have two children under the age of 5, so for the foreseeable future, my wardrobe needs resemble those of a typical frat boy. As in, we both want clothes that puke won’t stain.

Full coverage could be had, other mother said, with a visit to the Athleta website. Available in khakina, asphalt, dismal, dumpy, cheerless and sexless, the “Whatever” skort is one of 18 styles of skort sold by Athleta, the sporty sister in the Gap family.

I knew -- I knew -- that clicking the “add to bag” button would send me down a road from which there might be no return. A road that leads to admiring a woman’s high-and-tight haircut and thinking, “I bet her hair never gets in her face.” A road built for shoes with a thick, chunky heel. Travel many a mile down this road, and I’d find myself in a pedicure chair, my feet in the hands of a woman who would grind and grind at the soles with a heavy-gauge sandpaper before looking up into my eyes and grimly declaring, “You might want to buy one of these tools. They’re only $5, and they would really help you with the caked-on dirt.”

I knew it. And yet ... I bought the skort. I bought into Whatever.

Please, understand that five years ago, I would have bought a skirt. One little vowel makes such a difference. Think back to Marilyn Monroe, the white dress and the subway grate. The skirt appeals because it’s dangerous. At any moment, it might fly up.

We take pains so that it doesn’t. We sit just so. We cross our ankles. We hold it down when the wind blows. But we’re aware, just like the fellas, that it wouldn’t take much to flip the sucker up. And, dude, that is hot.

With a skort, we’re acknowledging that skirts sometimes fly up, so, hey, here’s some board shorts to look at, just in case.

The reviews on the Athleta website hold a few clues as to why Whatever might not offer the skirt’s sex appeal:

“It looks nice even when I'm at upper limit of weight.”

“I bought them for golf but wear them everywhere.”

“The inner shorts are soft and breathable and prevent chaffing between thighs too!”

“The two back pockets are so handy for cell phone, keys etc.”

“My husband wishes they were shorter.”

“I am still annoyed by the drawstring in the waist (SO many steps when you're using the bathroom!)"

Whatever arrived in the mail just in time for warm weather. I wore Whatever, whenever. I Ergo-ed in it. I strollered in it.  Hell, I swaggered in it. I even wore it on the spiral slide at the park, screaming at my male friend on the ride down, “Don’t worry! It’s a skort!”

He wasn’t even looking. Lately, they’re just not looking.

The skort had delivered on its promise. It had spayed me. It had communicated to the world that I am a mother, that the body part under my skort -- my skagina, if you will -- has accomplished the signature biological act of my species, and that now, I’d prefer that no one look at me.

On second thought, I don’t think that’s what I’d like my clothing to say.

Summer is ending. On my last visit to the Athleta site, I noticed that Whatever is also available in corduroy, and I am tempted to extend this look into the next season. With corduroy, my hips could even sound thick.

Yes. This fall, they’ll still be selling Whatever. And this fall, I’m not buying.

Paige Parker is a writer, teacher and writing coach based in Eugene, Ore. She blogs at takingfences.wordpress.com.