At a recent talk, the Nobel Prize-winner asks: Can the ideology of capitalism bend to justice and love? 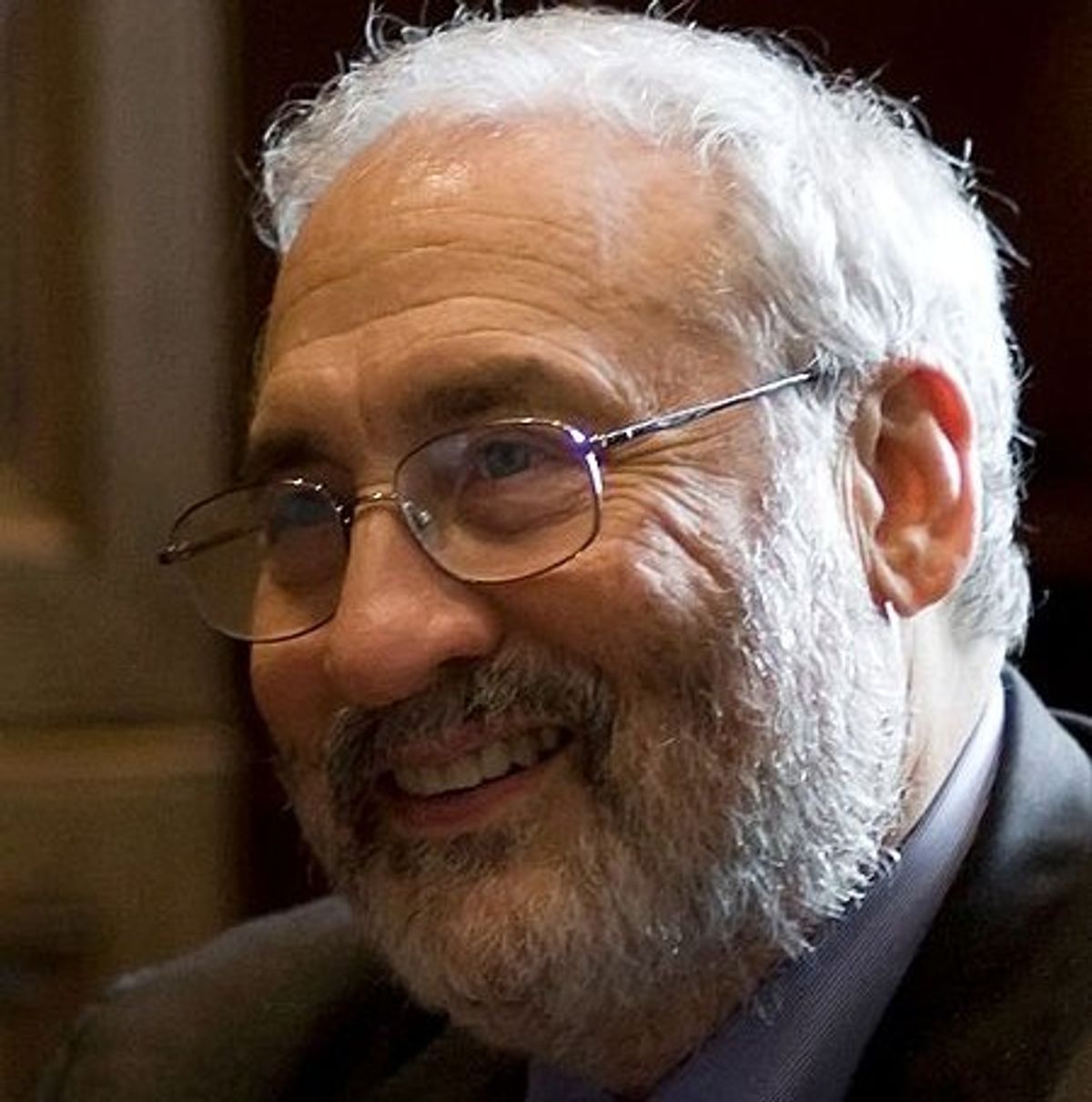 Cash payment is not the sole nexus between man and man. ~Thomas Carlyle

Even after a terrible financial crisis exposed their folly, the High Priests of Old Time Economics still speak the cold, barren language of self-interest. Acting solely in your own interest, they preach, is the key to efficiency and human well-being.

Sound like a strange combination? In today’s atmosphere of fundamentalist religious fervor, it’s easy to forget the great traditions of progressive Christianity that have made economic justice a central focus. I was raised in the bosom of North Carolina’s Pullen Memorial Baptist Church, where the legendary liberal firebrand W.W. Finlator carried the message emphasized by Dr. Martin Luther King – namely that it was the duty of Christians to fight on behalf of the poor, to protect the workers, and to end discrimination in all forms.

“Every society grapples with moral issues,” said Johnson as he introduced Stiglitz. “And Joe might be our ‘Grappler-in-Chief.’”

The Grappler-in-Chief got interested in economics not because he was dazzled by mathematical equations, but because he wanted to find a way to solve the sociological problems he saw growing up in Gary, Indiana, where he noticed that discrimination stood in the way of America’s ideal of equal opportunity for all. His parents told him that the two most important things in life were to use your mind and see what you could do to serve others. And so he did both.

Lately Stiglitz has focused on the alarming gap in the U.S. between those at the top and everyone else, an interest which led to a prescient Vanity Fair article on the dominance of the 1 percent in May 2011, and most recently to a new book, "The Price of Inequality." Commenting on Mitt Romney’s declaration that 47 percent of the nation was nothing more than freeloaders, Stiglitz said, “the real divide is between those who see the country as a community and those who don’t.”

That divide keeps increasing, and according to Stiglitz, the heart of the problem is our corrupt political system. “It’s the politics, stupid,” said Stiglitz, noting that while the same economic forces operate around the world, the U.S. stands out for our lack of social mobility and economic injustice. What makes the difference between a more equitable country like Sweden and America? Rules and regulations that favor the wealthy, said Stiglitz. He pointed out that such a trend is not only economically destructive, but morally indefensible.

“Our largest banks engaged in practices aimed at blacks and Hispanics,” said Stiglitz. “They did so without moral restraints.” He observed that the criminal behavior of the financial sector has warped our sense of justice, undermining the promise of the Pledge of Allegiance, which calls for justice for all. That promise, he indicated, rang hollow to people who had been evicted from their homes through no fault of their own in the wake of a crisis created by the banking industry.

So why does this immoral behavior continue? How do we break the cycle? Members of the panel discussed the difficulty of letting go of myths that give us comfort. Rob Johnson talked about the rags-to-riches Horatio Alger story as a “necessary illusion” that staves off anxiety in the face of mounting economic challenges.  He observed that to realize that America is no longer the place where anyone can move to the top is to suffer a great sense of loss and mourning. People will keep clinging to such myths long after they have been disproven to avoid the pain and uncertainty of facing unpleasant truths.

Betty Sue Flowers described capitalism as a kind of religion that people were afraid to question and tamper with lest some great evil be unleashed (which many call “socialism”). Such beliefs are not based on rational thinking, she reminded the audience, and do not fall away in the face of evidence and statistics, no matter how compelling. “The ideology of capitalism can only be confronted by a stronger ideology,” she said, “one of justice and love.”

Dr. Cornell West, who was in the audience, took up this theme in commenting that even if we could convince 1 percenters that promoting justice and opportunity for all was in their self-interest, that still would not be enough. He recalled that all the great social movements, from the Civil Rights Movement to the Women’s Movement, had been motivated by strong moral values which were linked to stories about something much deeper than Me-Firstism.

Myths are stubborn, but they can die. The myths of the inferiority of blacks, for example, was dealt a body blow in Martin Luther King’s “I Have a Dream Speech,” the promise of which culminated in the election of Barack Obama as president. Myths about women – despite GOP attempts to preserve them –  are dying, too.

The idea that human beings are better off acting selfishly would have been laughable to Shakespeare, anathema to Jesus, absurd to Darwin and insane to Freud. Even Adam Smith, the father of capitalism, would have recoiled from the crass self-interest philosophy promoted by Ayn Rand and preached by acolytes like vice presidential hopeful Paul Ryan.

Cooperation, compassion, and justice are the cornerstones of human well-being. We can hope that the selfishness peddled by the Romneys and Ryans and the lying “Free Marketeers” will eventually be recognized for the snake oil that it is. Conversations like Wednesday night’s move us closer to that moment.