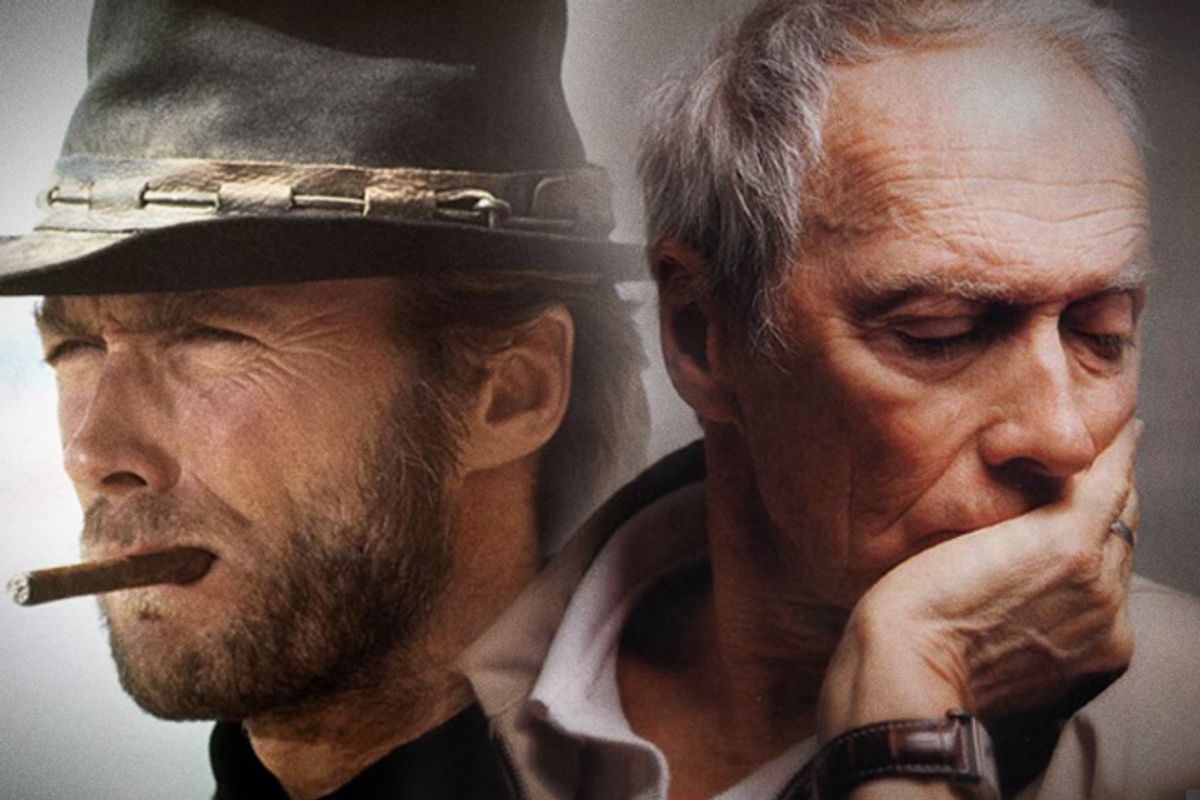 Sure, I wish Clint Eastwood had not recently revealed himself to be a grumpy old guy who talks to furniture, on behalf of not just a doomed presidential candidate or a right-wing presidential candidate – because neither of those things is a huge surprise -- but a third-rate doomed right-wing presidential candidate. But I wish lots of other things too. I wish that baseball, the so-called national pastime and the subject of Eastwood’s awful but fascinating new movie “Trouble With the Curve,” hadn’t become a niche entertainment for suburban white people with bad clothes and worse politics. I wish that the guy most of us Eastwood-mockers are likely to vote for would stop randomly nuking civilians in the Third World, and that American politicians could ever, even once, have an honest public conversation about our screwed-up relationship with Israel. I wish that American liberals had better sense than to be smitten with Bill Clinton all over again, like the girl with the black eye who feels sure that her boozy, good-looking boyfriend has turned over a new leaf this time.

Here’s what I don’t wish: I don’t wish that Clint Eastwood had an entirely different, less erratic movie career than the one he’s actually got. It’s even more difficult to imagine that than to imagine those other things. Whatever you think of his life choices or his politics or his films – and I’m not going to defend “The Bridges of Madison County” or “Space Cowboys” or, Jesus H. Christ, the execrable “J. Edgar” on any level whatever – Eastwood is an American monument on the scale of Elvis and Sinatra. He’s The Man With No Name, Dirty Harry Callahan, the outlaw Josey Wales. He’s Clint freakin’ Eastwood, iconic male badass of all time, and you and I do not get to make the rules for him, no matter how ridiculous he gets.

One could certainly argue that he should have retired from acting, and maybe directing too, after “Gran Torino” in 2008, which had that valedictory, elegiac feeling of summing up and signing off, was cleanly constructed in the classic Eastwood style, featured a Detroit muscle car and perhaps the best performance of his late career, and made a bunch of money besides. But he didn’t. Eastwood has directed several expensive bombs since then, each one worse than the one before, and now he’s back in an acting role at age 82, playing a guy so old and decrepit he makes Walt Kowalski from “Gran Torino” look like the smooth-talking, sharp-dressed sex-god jazz DJ in “Play Misty for Me.”

But here’s the thing: “Trouble With the Curve” (directed by Robert Lorenz, an assistant director on previous Eastwood films) is an inept and preposterous picture on various levels, generously infused with the nostalgic sentimentality that makes baseball fans of a certain vintage so intolerable. But Clint Eastwood, ladies and gentlemen, absolutely brings it as a “broken-down old man” with macular degeneration who’s at the tail end of his career as an Atlanta Braves scout. He’s done versions of this role before, several times: The crusty widower and failed dad who may still have some valid wisdom to impart, but has been entirely left behind by technology, by feminism and by the perverse idea that men can or should ever discuss their goddamn feelings.

As soon as I tell you that Eastwood’s character, Gus, has one last big scouting mission for the Braves, and that he begrudgingly accepts the aid of his estranged daughter, a high-powered attorney named Mickey (played by Amy Adams, Ms. I’m-in-Everything of 2012), you know everything essential about where this is going. When I add that Mickey (named for Mickey Mantle, naturally) is still single because brown-nosey, law-firm guys gross her out, and that one of the other scouts on the trip is a former ballplayer and one-time protégé of Gus’, and more to the point is played by Justin Timberlake – well, now you have the whole deal.

Almost everything about the plot of “Trouble With the Curve,” and its antediluvian, anti-“Moneyball” portrait of the baseball world, is profoundly silly. But Adams, as usual, is terrific every second she’s on-screen (the more I think about “The Master,” the more I think she blows the ham glaze right off Philip Seymour Hoffman and Joaquin Phoenix), and Timberlake, big old puppy-dog that he is, is just fine whenever his undercooked dialogue gives him somebody to bounce off. As for Eastwood – well, when we first meet Gus, he’s cursing out his own dick, and struggling to have a halfway successful morning urination. He’s playing exactly the kind of guy who would have loved his own performance at the Republican convention, assuming he could actually see the TV set or operate the remote. It’s troubling and brilliant and, no, we can’t quite be sure where the boundaries between character and actor lie. But we never really do anyway.

Michael Chabon’s new novel, “Telegraph Avenue,” features a tragicomic supporting character named Luther Stallings, a one-time blaxploitation star fond of telling all his no-account friends on the streets of Oakland, Calif., that Clint Eastwood is the greatest male actor in Hollywood history and the model for his own screen portrayals of laconic rebels who kick ass and don’t bother taking names. As Chabon surely knows, Eastwood himself grew up in Oakland, a white working-class kid from an increasingly black city, and (as a former Oaklander myself) I have long believed that background lay behind the power and ambiguity of his screen persona.

As Dirty Harry, Eastwood became a hero to right-wingers, would-be vigilantes and racist cops everywhere, but that was entirely a matter of interpretation, since neither Harry Callahan nor Eastwood himself has ever betrayed a hint of racial animus. Indeed, as Luther Stallings would tell you, Eastwood’s classic action flicks were widely popular among African-Americans, and that too was a matter of reading the signals. His characters were stone-faced killers who lived by their own honor code, contemptuous of all authority, much more likely to go out drinking with John Shaft than with Lt. Kojak.

Off screen, of course, Eastwood is a lifelong jazz aficionado, whose 1988 movie “Bird,” with Forest Whitaker as bebop legend Charlie Parker, helped launch the jazz renaissance of the ‘90s. (Spike Lee may be right that he would have made a better Charlie Parker movie, but we’ll never know; those two have been at each other ever since.) According to Patrick McGilligan’s 1999 biography, still the only decent one available, Eastwood was an accomplished teenage piano player and played boogie-woogie and ragtime at an Oakland bar, in between jobs as a lifeguard and working alongside his dad in an Oregon paper mill. I’m not claiming that you can’t be devoted to an African-American art form and still vote for Mitt Romney; I guess the point is that if Clint’s a 1-percenter now, he assuredly doesn’t have that background.

In fact, supporting Romney doesn’t fit all that well with Eastwood’s professed politics over the years, which have always been difficult to classify. He has frequently described himself as a social liberal and fiscal conservative, once joking that his views combined those of Milton Friedman and Noam Chomsky. He has opposed every American overseas war since Korea – when he served in the Army but did not see combat – and has repeatedly said he is pro-choice and supports both gun control and same-sex marriage. As recently as 2009, Eastwood said he was a registered Libertarian, and while he supported John McCain four years ago, he said that was because he trusted and liked him, and had nothing to do with partisan loyalty.

All that stuff, up to and just short of the infamous chair episode, completely works with the Clint Eastwood career and persona. Indeed, if he wants to declare Barack Obama a “greenhorn” ill-suited for the White House, as he has, and vote for somebody else, that’s emphatically his own business. For Eastwood to play a doddering old fool in a movie at age 82, even when the movie isn’t that good, is essentially awesome. If he wants to keep working until they carry him off the set on a slab, good for him. But to play a doddering old fool in public, in a vain and vague attempt to bolster a guy who is not just the most vapid, empty-suited loser in American political history but also an obvious representative of all the institutional bogosity that Clint Eastwood has always despised, on-screen and off – that’s just a bitter reminder of what time and tide will do to us all, no matter how badass we may be.