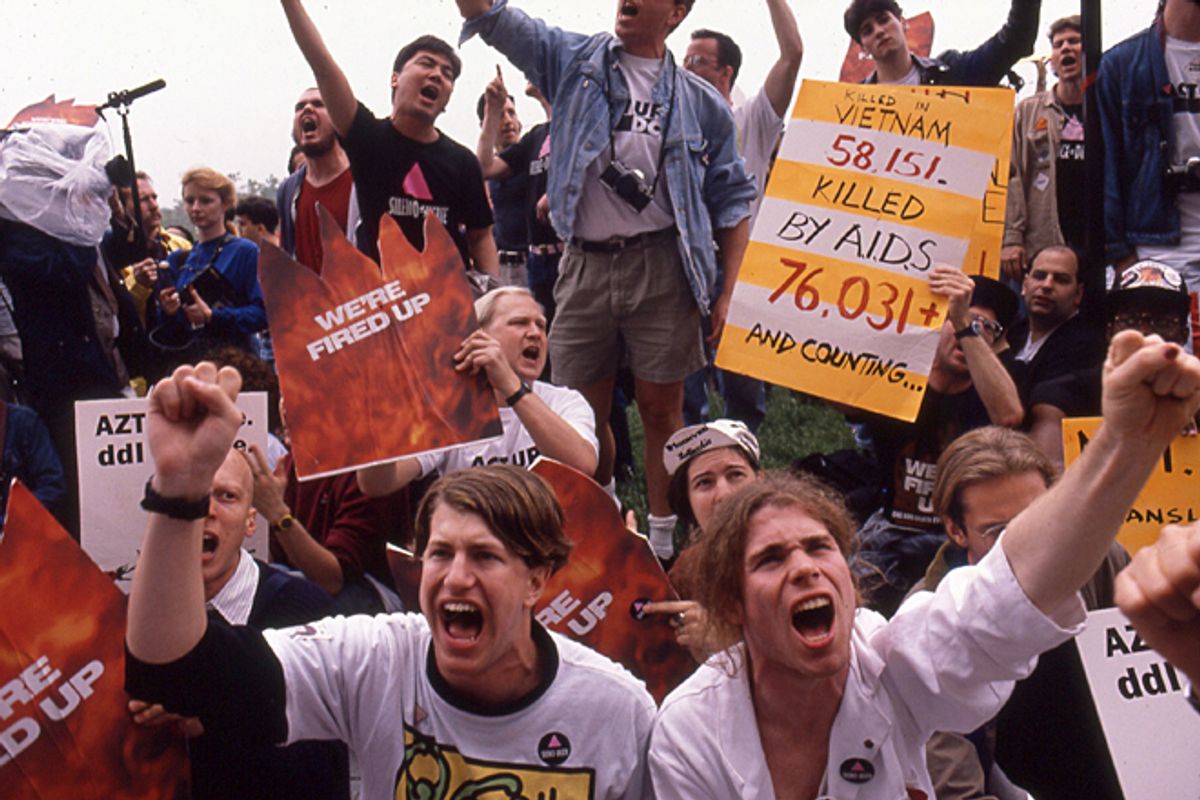 When we think about the reasons our country became so irreparably divided and broken, we tend to focus on the legacy of the 1960s: Vietnam, the sexual revolution, urban violence, white flight, Richard Nixon’s Southern strategy and so on. That stuff was important, obviously, but for me and many other people approximately of my generation, it was, more than anything, a result of the the Reagan years -- the supposed American renaissance built on mendacity and racism and hatred -- the Freddy Krueger years, the years of AIDS. It was a time when American citizens died by the tens or hundreds of thousands from a disease whose name the president of the United States declined to speak out loud while the people’s elected representatives (some of them, anyway) openly celebrated their deaths on the floor of Congress.

When a relative handful of those sick and dying people began to adopt the tactics of nonviolent civil disobedience and rowdy confrontation in a desperate attempt to shame the government, the scientific establishment and the churches into helping them, they were demonized by the media and suppressed by the police. They were marginalized – that’s exactly the right word for it – which wasn’t difficult because they were marginalized already. Peter Staley was a bond trader on Wall Street in the mid-'80s when he found out he was HIV positive (the term for HIV back then was “AIDS-related complex,” or ARC). As he remembers it in journalist-turned-filmmaker David France’s urgent and extraordinary documentary “How to Survive a Plague,” his mentor at the financial firm where he worked, who had no idea Staley was gay, observed that people with AIDS deserved to die because they took it up the butt.

That revelation, along with his own dramatically foreshortened horizon of mortality, drove Staley out of the closet, out of the financial industry and into the streets. As we see in “How to Survive a Plague,” he became a leading ACT UP activist and a co-founder of the Treatment Action Group (TAG), which challenged, antagonized and ultimately cooperated with doctors, scientists and pharmaceutical companies to develop a range of new medical options for people with AIDS. The fact that Peter Staley is still alive today – you can follow him on Twitter, if you'd like – is one of the truly wonderful things about the tragic and heroic story this movie tells and stands as a testament to the way people like him literally changed the course of history. But it doesn’t quite make up, as he would no doubt agree, for all the suffering and death along the way.

I did not live in New York during most of the era of outrage, despair and, ultimately, painful triumph captured in “How to Survive a Plague,” which mixes sparing contemporary interviews with immense amounts of never-before-seen video of protests and meetings, most of it shot by participants. Since France focuses almost entirely on Manhattan, the hottest of hotbeds for AIDS activism in those years, much of the specific drama in the film was new to me. All the same, the half-forgotten history captured in this remarkable testament belongs to all Americans (or at least it should), not only to the gay men who were most deeply affected by it. If you were alive during those years, then it’s time to reckon with the fact that you, too, survived a plague – and probably, in your own way, suffered from its effects. For me, at least, this documentary was an illuminating, inspiring, painful and highly necessary trip into the past. (It led me to thinking, for instance, about my very first editor, a man who saw possibilities in me I did not see in myself, who loved me and feuded with me bitterly, who forgave me when he was dying although I had done nothing to deserve it and who left me with a debt I can never repay.)

France’s specific subject is the odyssey of ACT UP and TAG, two interrelated but disparate groups of activists who emerged from the apocalyptic chaos of New York’s gay community in the mid-'80s, a time when it seemed not just conceivable but likely that an entire generation of young men would be wiped out in a kind of viral genocide. It’s reasonable to conclude, looking back, that many people in science and government had decent intentions and simply didn’t know what to do about AIDS, an epidemic of a new and puzzling variety. But it was equally clear to the young men who were watching their friends and lovers die week after week that the reaction of officialdom, and of a great many of their fellow citizens, ranged from revulsion to polite distaste to a strong desire to look in the other direction and think about something else.

I’d have been happy to live out my life never again seeing the faces of such homophobic and generally hateful goblins as Sen. Jesse Helms and John Cardinal O’Connor, but it’s useful to remember that such people are not deeply buried in the American past and that some are with us today. While ACT UP’s “Stop the Church” protests inside St. Patrick’s Cathedral in 1989 no doubt struck many onlookers as shocking and disrespectful, many of the protesters involved had been raised Catholic and were reacting in outrage against a church that actively scorned them and seemed to delight in their extinction. One can argue that those demonstrations were counterproductive, at least in terms of public relations, but ACT UP’s multi-pronged assault against the pharmaceutical corporations, the Federal Drug Administration and the medical establishment definitely was not.

Perhaps the most fascinating aspects of the history presented in “How to Survive a Plague,” at least in terms of politics and policy, lie in the gradual and incremental progress from outsider confrontation to insider access. (Not to mention all the infighting and name-calling among activists that went along with it.) This case history suggests strongly that you cannot have one without the other; in other words, people like Staley would never have gotten the microphone at FDA hearings, or seats at private meetings in pharmaceutical boardrooms, without being massive pains in the ass first. If they’d all been polite and held up their hands at meetings and voted for Bill Clinton and written letters to the editor like good little small-D democrats, they’d all be dead now.

Another crucial thing you can see clearly in the movie, and also in recent social history, is the emergence of a younger generation of doctors and scientists who were OK with open discussion and with sharing information with outsiders in ways their professions had previously avoided. They were OK with it because the world was changing and they hadn’t been indoctrinated into the old-fashioned Masonic manner, and they were OK with it because the protesters simply couldn’t be ignored and you needed to include them in the process in order to get anything done. Thankfully, the days are long gone when a surgeon could perform a radical mastectomy on my mother without ever telling her that was a possibility. AIDS activism is not the only reason for that cultural change, of course, but it reshaped the drug-approval process and permanently changed the way bureaucracies respond to a national health crisis.

After multiple missteps, far too many deaths and the painful false dawn of AZT – the first major AIDS miracle drug, which ultimately proved to be ineffective, on its own, for most people – the mid-1990s brought the medical breakthrough activists had long hoped for and which they had helped make possible. A new class of drugs called protease inhibitors turned a previously fatal illness into a manageable long-term condition for many people, but the story was, of course, not over then, and it is not over now. Once perceived as a disease of First World white gay men, AIDS is now a worldwide epidemic disproportionately affecting poor women and children, very few of whom have access to the drugs likely to prolong their lives. As for the scars left on our country by the plague – on me and you and Peter Staley and everyone else who has survived – we’ve got a long way to go in dealing with those. This movie, one of the most important documentaries in years or decades, is a good place to start.

“How to Survive a Plague” is now playing in Chicago, Los Angeles, New York and San Francisco. It opens Sept. 28 in Boston and Washington; Oct. 4 in Miami; Oct. 5 in Dallas, Houston, Minneapolis and San Diego; Oct. 12 in Denver, Philadelphia and St. Louis; and Oct. 19 in Palm Springs, Calif., and Santa Fe, N.M., with more cities to follow.

Aids Documentaries How To Survive A Plague Movies Our Picks Our Picks: Movies