We all know it's unhealthy to stalk exes on Facebook. Now science confirms it. If only it was easier to let it go 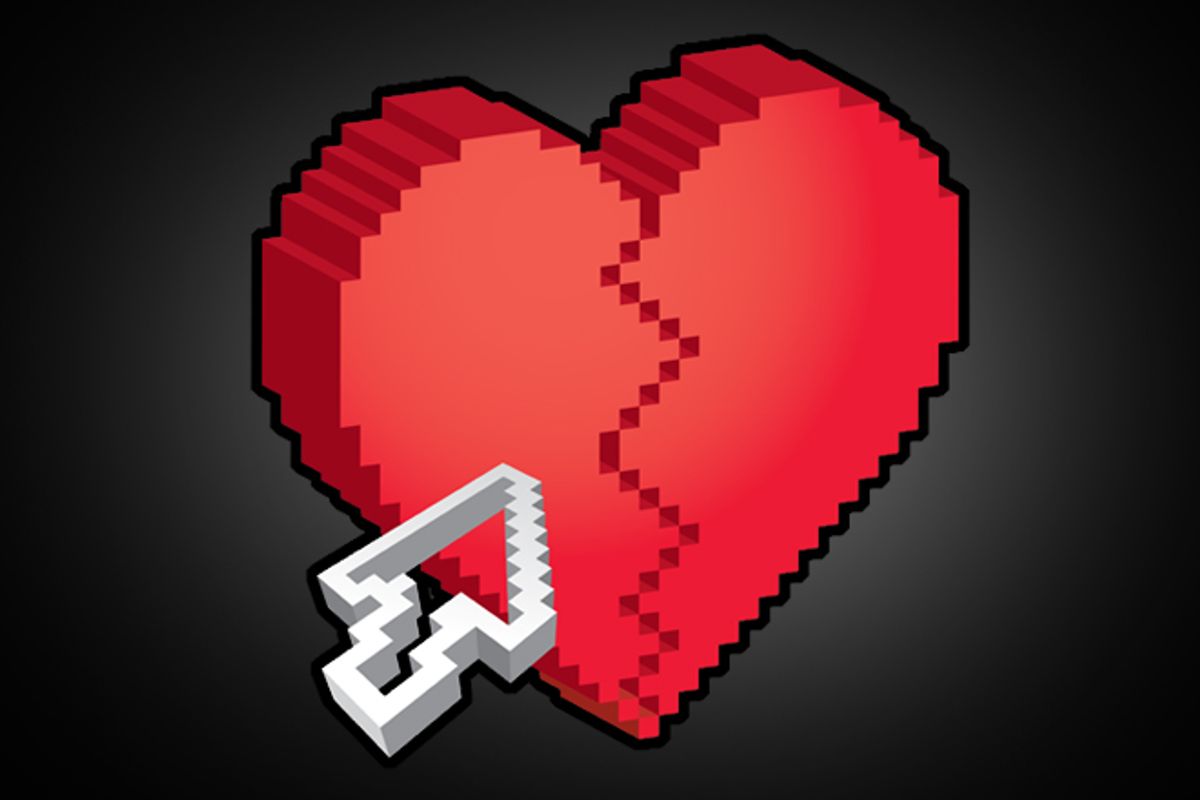 It was in a weak moment of newfound singlehood that I thought, "Hmm, I wonder what he's up to now." Having severed our Facebook friendship, along with our romance, a few years ago, I clicked over to Flickr, the one place I knew could give me a glimpse into his life. And there it was: a self-portrait of him wearing a wedding ring.

Ignoring the gender dictates of marital tradition, I irrationally rationalized that it was merely an engagement ring. "No, he's not married," I thought. "Is he married? No way he's married."

Internet-stalker style, I found further proof on Twitter: Someone had live-tweeted a photo from the wedding. There he was in his tux at the end of the aisle during the sunny, outdoor ceremony. There were shots too of the bride and the happy couple's Lego-people cake-topper. The term "TMI" is sorely overused, but this was the definition of it. It's one thing to realize that the man you once wanted to marry and have babies with is on that path with someone else, and another to be a virtual witness to it.

Conventional wisdom, and even science, has it that cutting off contact with an ex makes for a smoother recovery. But nowadays -- said in my best granny voice -- it's much more difficult to get distance from an ex. (Funnily enough, my married ex is thousands of miles away -- and it was the Internet that allowed our long-distance relationship to exist in the first place.) It isn't as easy as tearing your rotary phone from the wall. It isn't even as simple as deleting an ex's number from your cellphone. There's Facebook, Twitter, Instagram and the rest of the Internet with which to contend.

My ex's live-tweeted marriage reminded me of this. So did my most recent breakup with a man whom I remain connected to via three social media platforms. But then there came yet another reminder this week -- a study with a finding that will surprise no one: "Facebook stalking" an ex "may obstruct the process of healing and moving on from a past relationship." You can no longer pretend that hitting "refresh" on your ex's profile is helping you "process."

The study by Tara C. Marshall, a psychology professor at Brunel University, found that “Facebook surveillance was associated with greater current distress over the breakup, more negative feelings, sexual desire, and longing for the ex-partner, and lower personal growth." More surprisingly, those who stayed Facebook friends with their ex "reported less negative feelings, sexual desire, and longing for the former partner" -- but they were "lower in personal growth." Marshall suggests this may be because "unbidden exposure to the potentially banal status updates, comments, and photos of an ex-partner through remaining Facebook friends may have decreased any residual attraction to the ex-partner," whereas defriended exes "remain shrouded in an alluring mystique."

The study's takeaway? "Avoiding exposure to an ex-partner, both offline and online, may be the best remedy for healing a broken heart," writes Marshall. Easier said than done.

If you've found it difficult to resist the temptation, you're not alone. A study published last year found that more than 50 percent of respondents -- all college students, mind you -- reported having looked through an ex-partner's Facebook photos in search of a snapshot of their new partner. It isn't just surveillance, though: Around 30 percent admitted to having "posted poetry or music lyrics" in status updates "to taunt or hurt" an ex, as well as having updated their status "to make [an] ex-partner jealous." (On a sweeter note, nearly 60 percent had posted poetry or music lyrics "to try and get back together." No data on how well that works.)

This year, Canadian graduate student Veronika Lukacs wrote her master's thesis on Facebook breakups. She found that "88.2 percent of survey participants who remained Facebook friends with their ex-partners following the breakup said that they creeped [i.e., Facebook stalked] their ex-partner following the breakup." Among those who didn’t remain Facebook friends, "70.2 percent said that they tried to creep their ex-partners' accounts through other means, such as by logging into a mutual friend's account." And nearly 75 percent admitted to trying to check out an ex’s new partner's profile.

Care for less scientific proof of the ubiquity of Facebook-stalking exes? There's the collective sigh of generational recognition heard across the nation when HBO's "Girls" showed Marnie obsessively clicking through her ex's Facebook photos, finding that he'd gone to Rome with his new ladyfriend. She later snarked, "He was making all these wishes at those overrated fountains." (Sounds a lot like me: "A lego cake-topper, really?" To which a friend replied: "Actually, I think it's pretty cute." Fine.)

Even when you defriend an ex on Facebook, there are still countless other social media platforms that can beckon to our heartbreak, jealousy or just plain curiosity. Increasingly, there's no such thing as "out of sight, out of mind." From relationship status updates on Facebook to check-ins on FourSquare, it's never been easier to secretly keep tabs on exes -- and it's never been harder not to.