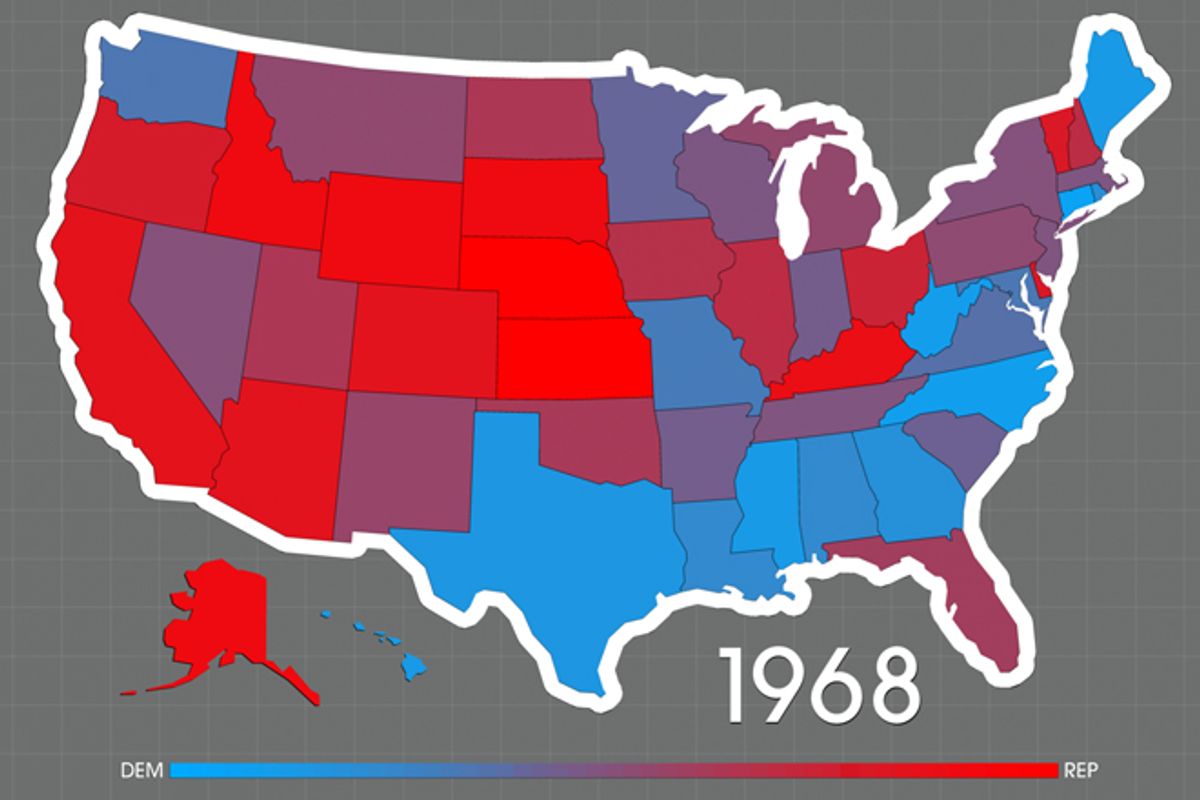 The story of American politics over the last few generations is one of ever increasing partisan polarization. Barack Obama was able to pick off a few Republican states in 2008, but ideology and party identity have largely synced up, draining the electoral map of much of its fluidity. When it comes to presidential politics, there are a lot of red states, a lot of blue states, and only a few true swing states.

Over the years, the partisan divide at the top of the ticket has steadily crept down the ballot.  And if there was a moment that the red state/blue state divide we now know was formalized, it was the 2000 election, when George W. Bush swept the South and the Great Plains but was shut out on the Pacific Coast, in much of the Midwest, and (except for New Hampshire) north of the Mason-Dixon line. This marked the culmination of two trends: 1) the South’s steady march away from the Democratic Party, which began sometime around the Depression but didn’t really kick into gear until the national Democratic Party embraced racial equality – first at its 1948 convention, then through the Civil Right Act of 1964 (Al Gore  couldn’t even carry his native Tennessee); 2) the mass rejection of the modern, Southern-dominated, religion-infused national Republican Party by culturally moderate voters in the Northeast and on the Pacific Coast.

That basic map has remained intact since 2000, and its contours won’t be radically altered by what happens this November. But there have been some subtle changes over the last 12 years. New Hampshire, the last Yankee Republican redoubt, finally painted itself blue in the mid-aughts, while changing demographics have turned Virginia into a true purple state and North Carolina into one where Democrats can at least compete in presidential elections. Other changes are in progress. West Virginia, for instance, remains strongly Democratic in terms of voter registration, but it’s safely Republican at the White House level, something that figures to eventually trickle down to the rest of the races on the ballot.

To fully appreciate the journey that produced today’s polarized electoral map and the trends that will shape the future, Salon’s art director, Benjamin Wheelock, pored over a century’s worth of presidential, congressional and gubernatorial election results from every state, assigning each a shade of blue or red for each election year. Watch as the map travels backward from the divide we know today, through the long, slow post-civil rights evolution, through a sea of red when Dwight Eisenhower takes power, to coast-to-coast blue during the FDR years, and finally all the way to 1912, just a few decades after the end of Reconstruction, when “Republican” was still a curse-word in the South and the GOP reigned in states we now think of as Democratic bastions.

It’s hard to imagine, say, Massachusetts ever becoming a red state, or Alabama turning into a blue one. But, as the map reminds us, not long ago that this wasn’t an absurd idea at all. It was reality.