The winners were obvious, but there were still some genuine laughs: Chicken sandwich with two pickles, anyone? 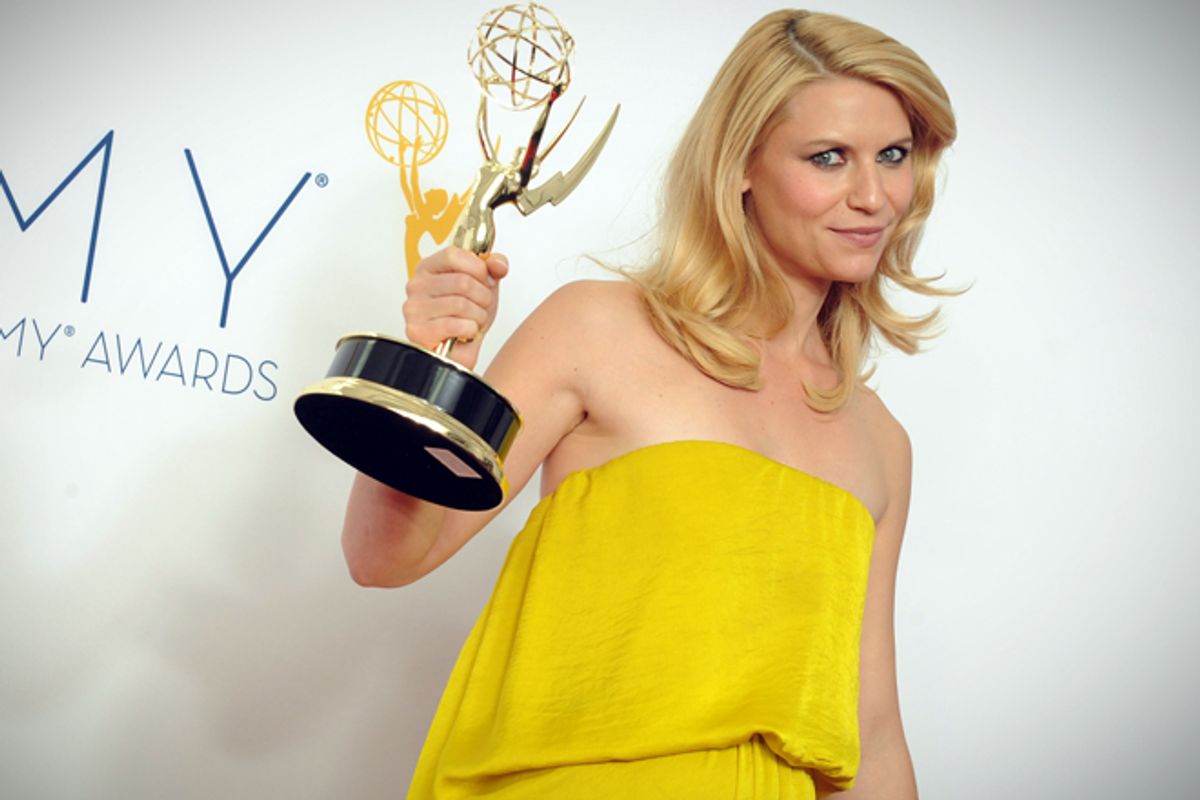 Actress Claire Danes, winner of the Outstanding Lead Actress In A Drama Series award for "Homeland," poses backstage at the 64th Primetime Emmy Awards at the Nokia Theatre on Sunday, Sept. 23, 2012, in Los Angeles. (AP/Jordan Strauss)
--

It was a night that was dominated by lackluster bits – let's never speak of that lame Tracy Morgan Twitter "prank" again -- and few surprises. "Modern Family" won and Jon Hamm lost as usual. But for those viewers who had the patience and fortitude to stick with this year's broadcast (which mercifully wrapped up not one minute overtime), there were a few moments of genuine levity and warmth among the forced smiles and awkward patter. The best theme of the night? Nominees who showed they know how to play well with each other. Herewith our picks for the evenings brightest highlights.

Acknowledging his sitcom husband, Stonestreet said, "I wouldn't be standing here without Jesse Tyler Ferguson. There is no Cam without Mitch." Then he continued, beautifully, "We get the awesome opportunity to play these two characters on TV and show America and the world what a loving couple we can be, just like everybody else, and it's an honor to do that," and added, "I never knew I'd be on TV as a gay man, but I love the pictures of hairy chests you guys are sending me." Sweet and touching and very funny.

Remember last year, how great it was when the female comedy nominees literally crowned Melissa McCarthy the winner? Proving yet again that sisterhood is powerful, this year the "Veep" star took her third career Emmy by thanking her sons Archie and Abel and the cast of "Parks and Recreation" ... before then awkwardly noting she must have mixed up her speech with Poehler's. Poehler then leapt to the stage for an exchange of crumpled up papers and one last punch line: Louis-Dreyfus reading, "Lastly, isn't it a shame that Amy Poehler didn't win? What?"

Aubrey Anderson-Emmons is a tyrant

In one of the night's few successful sketches, the cast of "Modern Family" revealed they really are one big happy family – with the exception of pint-size diva Anderson-Emmons, who plays Lily. Watching her terrorize Ty Burrell into an epic pratfall was a thing of beauty, but having her taunt Jesse Tyler Ferguson by noshing a treat from the notoriously "traditional" marriage supporting Chick-fil-A was downright inspired. "This is what I'm going to eat at my wedding," she hissed to her recently engaged TV dad. "What are you going to eat at your wedding?"

After getting an ecstatic hug from his (now departed) "Breaking Bad" co-star Giancarlo Esposito, a visibly stunned – and choked up -- Paul humbly thanked his fellow cast members – and the show's writers for not killing Jesse off.

Ricky Gervais mixes it up with Louie C.K.

Even thought he wasn't nominated, Gervais – who's already done a memorable guest stint on "Louie," decided to get competitive with the evening's two-time victor when he presented the award for directing in a variety special. "If he wins, he’s a better comedian than me," Gervais grudgingly stated. And when C.K. did not in fact grab the prize, Gervais was quick to crow, "Well done to everyone in that category, especially Louis, the second best comedian in the world."

Jon Stewart claws his way to the stage

After snagging his 10th consecutive Emmy for "The Daily Show" --  and right before putting network censors to work by declaring "how predictable these [BLEEP] things are" -- the 49-year-old host had to endure getting tackled by his fellow nominees Stephen Colbert and Jimmy Fallon on his way to collect his award. By the time made it up there, Stewart looked genuinely exhausted – and like he was having the best time of his life.

Accepting the award for her uncanny transformation into the woman from Wasilla, Moore scored cheers from the crowd when she cracked, "I feel so validated because Sarah Palin gave me a big thumbs down."

Jimmy Kimmel turns on his parents

Introducing his mom and dad by saying, "They always told me I could do anything I set my mind to," the show's host went on to note, "and this year I set my mind to winning the Emmy. And guess what? I didn't. You told me I could, and I didn't, and I'm devastated. You lied to me!" Egged on by Tracy Morgan, he then had security remove them, adding, "It's OK if you Taser them if you need to." Hey, who hasn't wanted to Tase the 'rents now and then?

For one of the most intense shows on television, the night's big winner proved to have an irresistibly lighthearted cast. First, dark horse winner Damian Lewis admitted, "I'm one of those pesky Brits, I apologize." And then, a glowingly expectant Claire Danes thanked her "baby daddy" Hugh Dancy and kept it real by shouting out to Mandy Patinkin with a "HOLLA!" Best single syllable of the night.