The no good, very bad Emmys

And the Emmy for dullest awards show goes to ... this year's Emmys 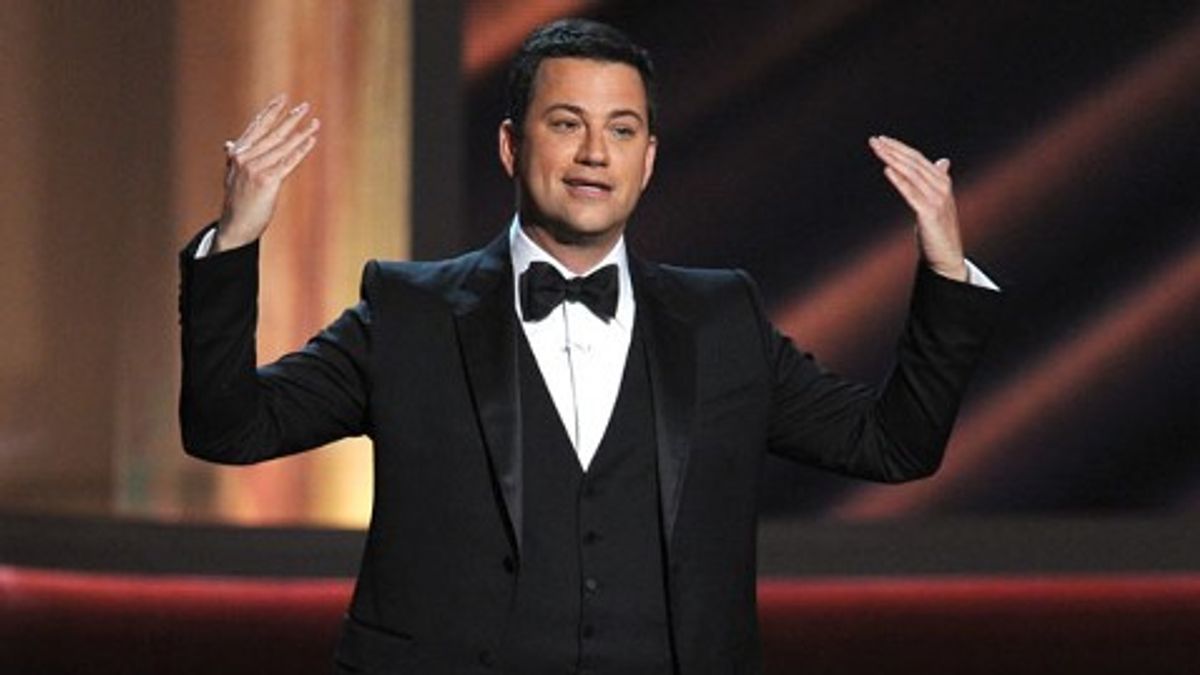 Well, that was painfully dull. The Emmys, hosted by Jimmy Kimmel, proved to be an extremely good night for “Homeland,” “Modern Family,” “Game Change” -- and no one watching at home. Those three programs swept the drama, comedy and miniseries awards, respectively, winning almost every single category they were nominated in and turning the Emmys into a long, boring, predictable coronation.

“Homeland” kept “Mad Men” from winning its fifth straight best drama award in a row, but by the time this award — the second to last of the night — was announced, “Homeland” not winning something, anything, would have been the surprise. As Jon Stewart put it, after beating out “The Colbert Report” yet again, in the future aliens “will find a box [of his Emmys], and find out just how fucking predictable they are.” Or, to put it another way, this year Jon Cryer won best actor in a comedy for his role in “Two and a Half Men.” Oh boy.

The night didn’t begin badly, leading with the best, toughest gag of the evening: Lena Dunham sitting on a toilet, naked, eating a piece of cake. In the bit, Zooey Deschanel, Martha Plimpton, Mindy Kaling and Connie Britton were assembled in bathrobes listening to someone sob in a bathroom stall. Looking for the source, they knocked open a door and found Dunham sitting on the porcelain throne, eating dessert, proving yet again that she really doesn’t give a shit about what people think of her or her body.

Things got weirder from there, with Kathy Bates arriving to hulk-smash the door off another stall, revealing a sobbing, botoxed Jimmy Kimmel. The actresses then all decided to fix Kimmel’s distorted face by punching him. The sketch was just one of the night’s sequences that resonated with the "War on Women” in perhaps not entirely well-thought-out ways: A bunch of actresses beat up a guy! Who has succumbed to the typically feminine pressure to get botox! [Tom Berenger joked redacted.] What does it all mean?! This coming-from-a-good-place-but-ending-up-in-an-odd-one was repeated later, with the “Homeland” creator's energetic imperative to “Thank all the wives!” which seems like something Ann Romney might say.

Events descended from Lena and her cake pretty rapidly. Kimmel’s opening monologue was extremely short, flat and to the point. He made a couple of jokes, some at Mitt Romney’s expense ("Downton Abbey" really must give a sense of what it's like to grow up in Mitt Romney's house”), but didn’t level any zingers. At some point he introduced Zooey Deschanel and Jim Parsons as “very white people,” which, OK ... that’s a little pot calling the kettle bone china, no?

The host just getting out of the way of the winners and letting them do their thing  would have been a nice, self-effacing, non-Gervais-ian move, except that Kimmel’s two biggest riff’s were hugely self-aggrandizing: first the gauche, faux-“In Memoriam” gag in honor of Jimmy Kimmel and then the bit in which he got his parents kicked out of the theater. Kimmel was a non-presence when he needed to be a presence — during the monologue and the introductions — and too big a presence when he didn’t need to be — during the extended, planned bits that should involve other famous people. (Kimmel also masterminded the moment where he basically asked America to do product placement for the Emmys, by tweeting that something shocking had happened there. Gross.)

The pre-taped bits, by and large, did work. The “Breaking Bad” black and white segment and the pre-taped interviews in which the comedy nominees were asked questions were strong and polished. The “Modern Family” gag about Lily being a total diva was very funny — and would have been funnier if the whole night hadn’t already felt like a giant plug for “Modern Family.”

But none of this matters when the show is an hour longer than it needs to be. When all but a few of the major awards have been handed out and there is still an hour and a half to go, something is wrong. When Damian Lewis won for “Homeland,” beating out Bryan Cranston and Jon Hamm, that was a surprise. He gave a very adorable, Hugh Grantish speech. But by the end of the night no cute speech was going to make another “Modern Family” or “Homeland” victory interesting, even great speeches, of which there were plenty. (Standouts: Claire Danes’ talk, and especially the line, “Mandy Patinkin, holla!” or, as I prefer to think of it, “Mandy Patinkin, challah!” And Aaron Paul, who has already won an Emmy, but gave an adorable, cute, genuinely surprised speech anyway.)

And when it wasn’t “Homeland,” “Modern Family” or “Game Change” winning, it was someone almost as predictable — Jessica Lange for “American Horror Story,” Dame Maggie Smith for “Downton Abbey. Or, worse, someone who didn’t really deserve an Emmy, like Jon Cryer or, great as she is, Julia Louis-Dreyfus in “Veep.” (That should have been Amy Poehler’s award, and the wonderful gag Louis-Dreyfus and Poehler played when they “switched” speeches made it seem like even Louis-Dreyfus knew it.) The best win of the evening, Louis C.K.’s victory for comedy writing, was awesome, unexpected and well-deserved — and C.K. didn’t crack one joke when he accepted. It was that kind of evening.