Bill Nye: Creationism is not science

After a video message goes viral, the affable Science Guy emerges as a leading debunker of creationist mythology 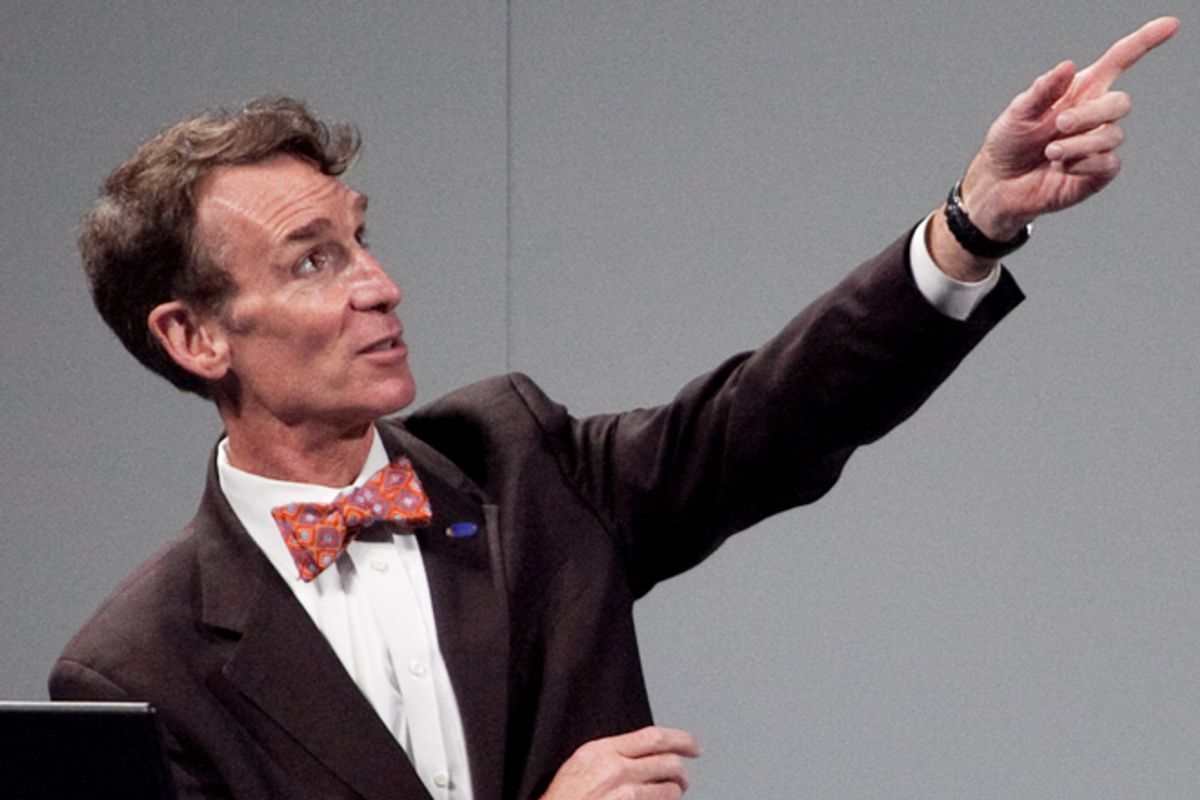 Bill Nye has always been awesome, as legions of adoring, PBS-raised kids and their parents will attest. But as his new plea against the bunkum of creationism proves, the Science Guy has, of late, blossomed into a bona fide badass avenger for reasonable thought and scientific evidence. Can the United States get a Department of Sanity, and can he please be appointed its head?

Earlier this year, Nye reignited his feisty call for attention to climate change, including battling the CNN anchor, who dismissed him as "the kooky guy who doesn't know what he's talking about" by shrugging him off, saying, "Yeah, I can read graphs, and there's a couple of things you can't dispute." Back then he added, in a phrase that should be plastered in every newsroom and classroom and etched into every laptop and smartphone: "I appreciate that we want to show two sides of the stories — there's a tradition in journalism that goes back quite a ways, I guess — but the two sides aren't equal here."

Then last month, he took he took his argument against the silliness of "two sides" to another divisive — and absurdly political – scientific issue: evolution. In a YouTube clip that's been viewed over 4,600,000 times, Nye pleads that "Creationism Is Not Appropriate For Children." On Monday, the L.A. Times ran a feature on how creationists have hit back. The Creation Museum, for instance, has offered its own rebuttal, including a response from one parent who says, "Children should be exposed to both ideas concerning our past." Ta da! There's that unfortunate, unhelpful concept of both sides again.

In June, a Gallup poll revealed that "46 percent of Americans believe God created humans in their present form about 10,000 years ago." I suppose it's because Kirk Cameron told them. We are living in a nation where those poor, ignorant souls are now picking fights with Dr. Pepper over a way of understanding the history of the human race that was pretty much settled definitively 150 years ago. A nation that stands virtually alone in the world in its willful misunderstanding of how we got here as a species. Enough.

Nye's video is a fantastic little monologue, one in which he notes that for all the "intellectual capital" we possess in the United States, the denial of evolution is holding us mightily back. "Evolution is the fundamental idea in all of life science, in all of biology," he says. "It's like, it's very much analogous to trying to do geology without believing in tectonic plates." He goes on to explain, "I say to the grown-ups, if you want to deny evolution and live in your world, in your world that's completely inconsistent with everything we observe in the universe, that's fine, but don't make your kids do it because we need them. We need scientifically literate voters and taxpayers for the future. We need people that can — we need engineers that can build stuff, solve problems." In other words, please take this notion of "two sides" to every story and let it die like the harmful, pathetic delusion it is. There are different sides to opinions and critiques. There are not two sides to evidence in front of you. It's like the difference between judging the artistic merit of a gymnastic performance, and the inarguable number on a racer's time.

A few years ago, my elder daughter had a friend from a strict conservative religious background whose family openly espoused creationism. One night at the dinner table, as she was talking about the girl's views, another family member said, "Well, they believe in that and we believe in evolution." Which is the exact moment I leapt into the conversation, full Kanye style, and shot that notion down. See, we live in a big world where we're lucky if we have friends of different backgrounds and different religious and philosophical perspectives. We need to respect that. But there is a vast difference between honoring other people's beliefs and giving them permission to have different facts.

Nye's message – one that a stunning 46 percent of Americans apparently still need to get into their thick Homo sapien skulls — is that beliefs are not truths. It's not that there isn't room for belief in our lives. It's that we desperately need to make sure our children understand the distinction between faith and science. I would never argue with my daughter's friend's family about evolution; it would be pointless. But I wouldn't dream of raising my own kids with the idea that the girl's perspective was just another way of looking at the world, another possibility. Instead, I couldn't be prouder to raise a girl who, when a classmate called Adam told her that he was named after the first human, retorted, "Actually, I was."