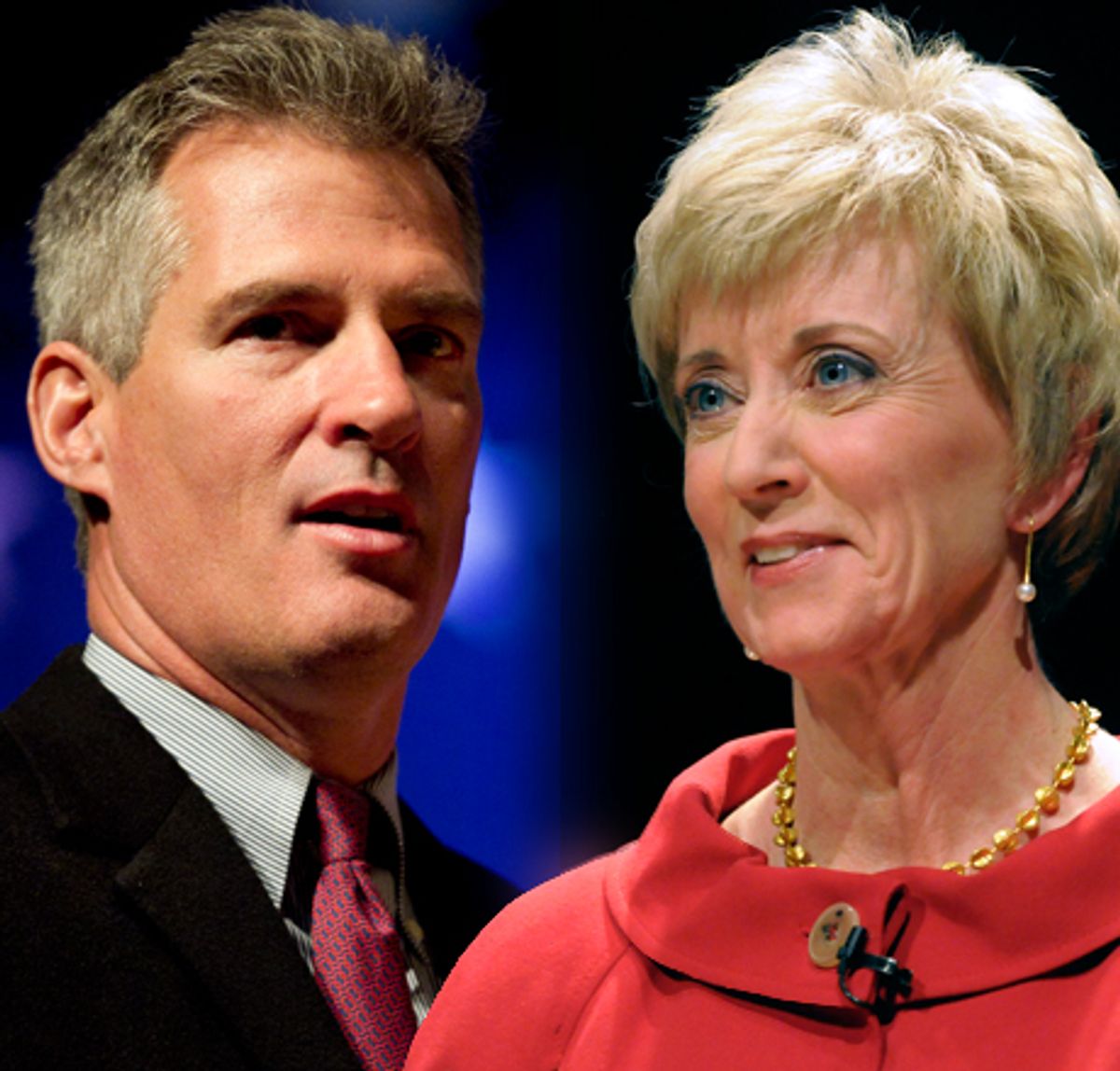 Here is something inconvenient for a self-professed moderate, pro-choice Republican running in a blue state: Getting pegged as opposing birth control access. It's a danger Massachusetts Sen. Scott Brown courted when, in March, he co-sponsored the Blunt Amendment, which would have allowed any employer to deny coverage of birth control (among other things) on religious grounds, and that Connecticut Senate candidate Linda McMahon invited by saying, however tepidly, that she'd have supported it. We're about to find out how the voters of their respective states feel about the extremism on women's health that's become the national Republican consensus -- with control of the Senate at stake.

McMahon's opponent, Rep. Chris Murphy, released an ad this week accusing McMahon of "siding with the most extreme Republicans to deny women healthcare." (McMahon carries the extra baggage of having made her fortune "demeaning women" in various executive positions at World Wrestling Entertainment.) McMahon has said she would have "reluctantly supported" Blunt because "this is not a question about contraception. This is about separation of church and state. I just think that was an overreach and an overstep by government." (The coverage guidelines in question already included exemptions for explicitly religious institutions.) Meanwhile, Scott Brown testily told Elizabeth Warren in a debate last week to "stop scaring women" by pointing out that he co-sponsored Blunt, opposed the Supreme Court nomination of Elena Kagan, and voted against the Paycheck Fairness Act. "Women need someone they can depend on, not some of the time but all of the time," she said.

Back in March, the conventional wisdom was that the "religious liberty" side of the issue was a winner, with Olympia Snowe being the only Republican to oppose Blunt and three Democrats voting for it, leading to a narrow 51-48 failure. (You can blame the continued presence of Rick Santorum in the Republican primary for how much birth control ended up dominating the proceedings around the same time.) But at least one of the endangered species that is the Republican moderate has since disavowed her party-line vote. That would be Alaska Sen. Lisa Murkowski, who handed the Murphy campaign a gift when she showed up in Connecticut recently to campaign for McMahon.

Murkowski told the Hartford Courant she regretted her own vote for Blunt. "Back home, it was being viewed as a direct attack on women's reproductive rights, on their ability to access contraception," she said, adding, "The debate in Washington and what we were targeting, I don't think is what was being understood back home. I can't tell you how it was here in Connecticut. I was a public figure who said, I actually regretted that vote." The Murphy campaign happily jumped on it: "“Even as national Republicans backtrack from unpopular anti-choice legislation, Linda McMahon doubles down on her support for far-right policies to deny birth control and crucial health services to Connecticut women,” a campaign spokesman crowed.

Brown has taken no such tack. When Elizabeth Warren hammered him on his vote in their recent debate, Brown declared, "I am not going to pit women against the church," he said. Big of him. Brown is clearly hoping that the air of moderation he affects will save him; perplexingly, he's been endorsed by both the Massachusetts Citizens for Life and Republican Majority for Choice. Massachusetts is clearly going to be a nail-biter, and Connecticut is closer than expected, though leaning in McMahon's favor. But both races highlight how far to the right the national Republican agenda on reproductive rights has moved -- and the how much the phrase "pro-choice" has lost meaning when it can be deployed to include denying birth control access.