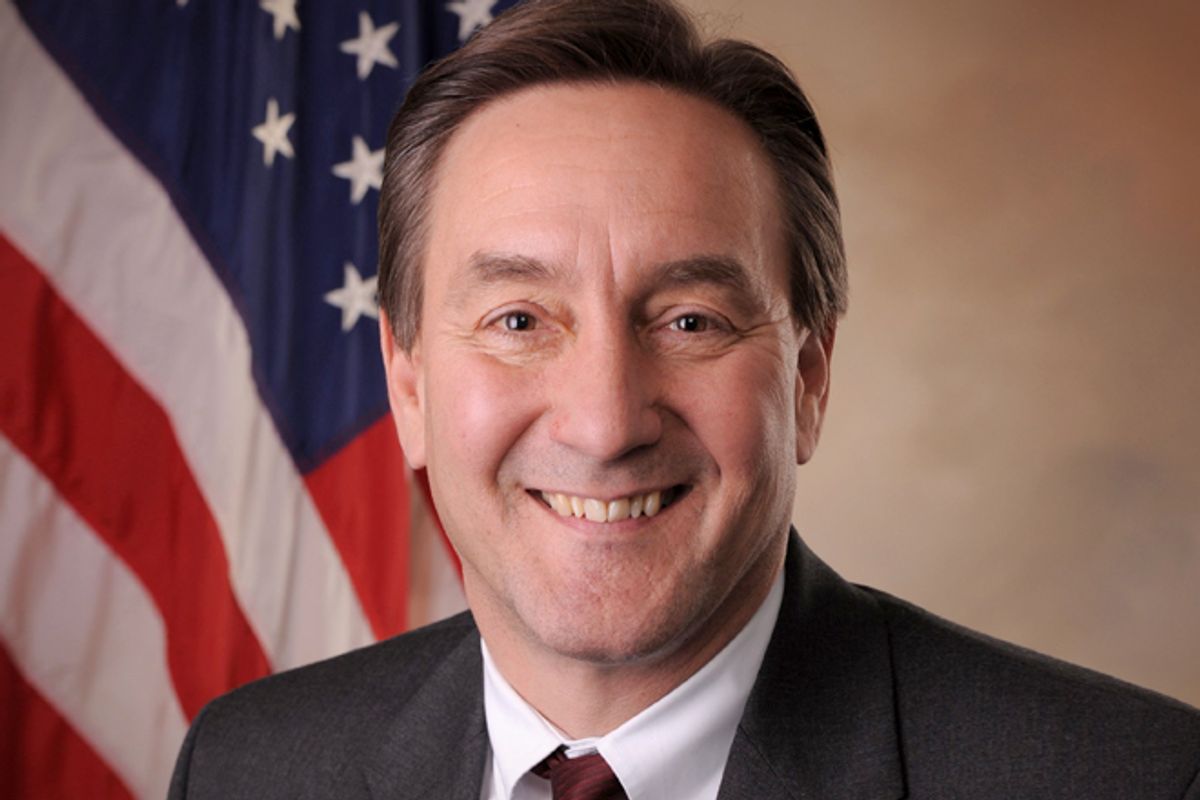 On a Wednesday night two weeks ago, North Dakota Rep. Rick Berg boarded a plane in Washington bound for Fargo in order to defend his Senate bid, which has become surprising vulnerable in recent weeks, despite Republican hopes for a slam dunk. The next morning, his Democratic opponent, former Attorney General Heidi Heitkamp, was going up with a new radio ad attacking the business practices of a real estate management company closely tied to Berg. The company, Goldmark Property Management, had earned a bad reputation in the state, along with tenant complaints, citations for alleged fire safety violations, and a C- rating from the Better business Bureau.

The ad, which highlights a case where the company sent a collections agent after a soldier deployed abroad, apparently touched a nerve in the Berg campaign, promoting the quick return of the congressman. At a press conference Thursday morning, Berg didn’t defend the company, but rather said he had no relations to the company and demanded that the Heitkamp campaign take down the “ 100 percent false” ads. He flew back to Washington that night for a fundraiser, but the attack, and Berg’s zealous response, have become an issue in a race that could determine control of the Senate, even though it has attracted little attention nationally.

As new revelations are emerging, a Salon review of Berg’s record in the state Legislature show he introduced numerous bills that would benefit landlords like Goldmark by making it easier for them to evict tenants, keep security deposits, and avoid paying some taxes.

First, there’s the open question about Berg’s relationship with Goldmark. While the Heitkamp campaign overplayed its hand by suggesting Berg owned or ran Goldmark, his claim to be “100 percent” divorced from the company strains credulity. According to Berg, he founded the company that proceeded Goldmark Property Management, but left several years before it changed its name to Goldmark. A few years after that, he helped found Goldmark Schlossman Commercial Real Estate Services. As Politico’s John Bresnahan reported last week, the two companies share a name, address, phone number, office space and many of the same officers and employees. Berg insists the two companies have no “legal affiliation.”

But Goldmark Property Management’s website listed Berg as a senior vice president until August, when it was scrubbed (here’s a screenshot) and stated that “Rick has been with GOLDMARK since its inception in 1981.” Berg has acted as a public spokesman for the company in the past, and on a 2000 campaign donation, he listed “Goldmark Property Management” as his employer. The Berg campaign now says this was a clerical error.

In any case, there’s no question that Goldmark has been good to Berg. Berg is one of Congress’ wealthiest members, worth up to $54 million. He’s made his business record the foundation of his political career. “With nothing more than a loan, a vision, and a lot of hard work, what began as a business idea among friends grew into what is now Goldmark Schlossman Commercial Real Estate Services,” his campaign bio states.

And judging by Berg’s record in the state Legislature, it’s not hard to see why they invested in him. According to legislative records, Berg introduced numerous bills as a member of the state House of Representatives and state Senate to give landlords more rights over their tenants in ways that could possibly benefit both Goldmark companies and thus Berg. In 1985, he sponsored a bill that would raise the amount landlords could charge a for security deposit, from one month’s rent to one and half month’s rent, and made it easier for them to keep security deposits.

In 1989, he introduced a bill that would have made it easier for landlords to evict tenants by allowing the proceedings to go through small claims court. That bill failed with zero yea votes, 101 nays and five absentees. That same year, he introduced a separate bill to make it easier for landlords to evict tenants by holding them responsible for “indirect” actions. It was ultimately vetoed by the governor, who said it was too ambiguous and “could lead to abuse by both landlords and other tenants.” Another bill introduced that year raised the amount of property left on the premises by tenants that landlords could keep or dispose of “without legal process.”

A raft of other bills would do favorable things for the real estate industry, such as prohibiting rent control, exempting real estate agents from some workers compensation requirements, and exempting new construction from property taxes for two years.

During much of this time, Berg was not employed by either Goldmark Schlossman or Goldmark Property Management, so there is no direct conflict of interest. Instead, most of the legislation (except for the 1985 bill) came during the period after he left the predecessor of Goldmark Property Management in 1987 and before he started Goldmark Schlossman. But considering his past and future involvement in the real estate industry, it seems reasonable to assume that he maintained close ties with executives at Goldmark who would benefit from this legislation, and that he might have indirectly benefited himself once he started Goldmark Schlossman in 1996.

The Berg campaign did not respond to a request for comment.