The website where Mitt Romney's winning in a landslide

At UnSkewed Polls, "liberal media bias" is removed from every survey that shows Obama ahead. Guess who wins? 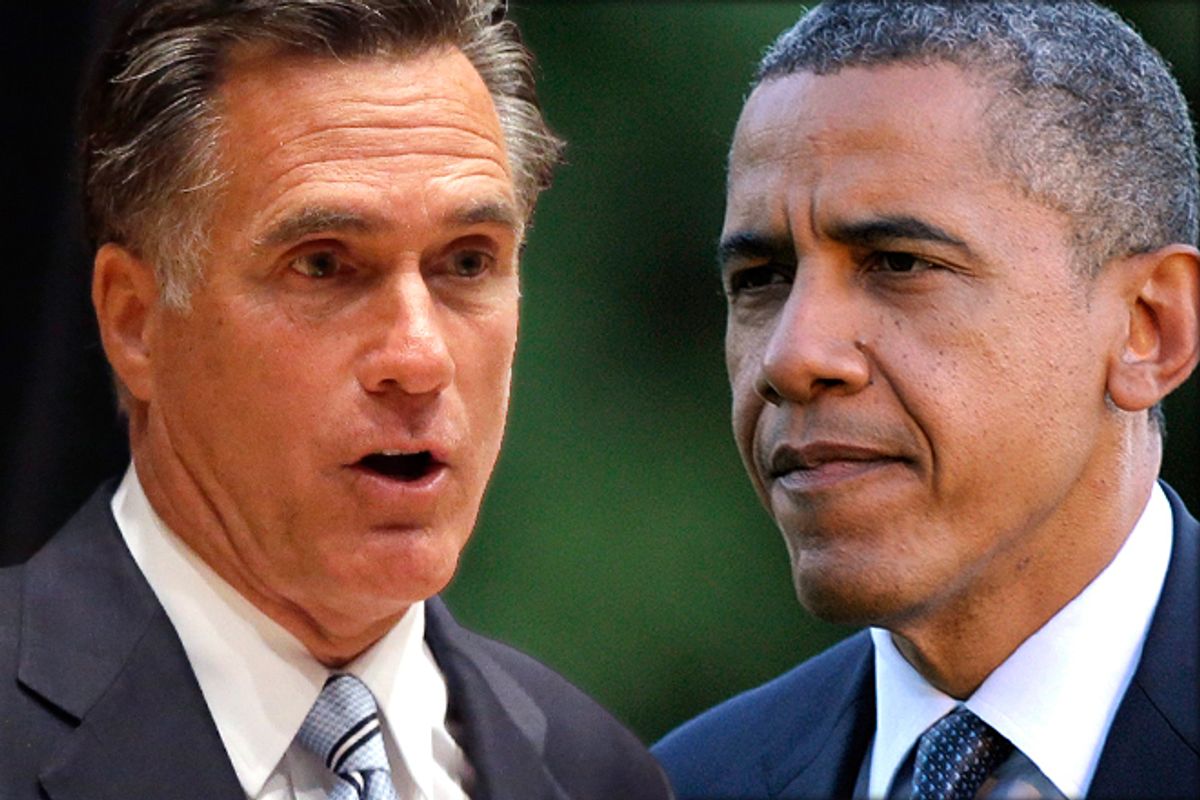 I present UnSkewedPolls.com, the best new website on the political Internet. UnSkewed Polls finally removes the "liberal media bias" from every single national opinion poll, and it turns out that "unskewing" them means "making it so that Romney is ahead by a lot." Rick Perry approves!

The UnSkewed Average has Romney at 51.8 percent and Obama at a mere 44 percent. How does the genius behind UnSkewed Polls go about unskewing all the polls -- like, for real, the vast majority of polls -- that show the opposite result? Well, Dean Chambers, the polling genius behind the site, simply "re-weights" every single national poll to reflect his belief that Republicans are undersampled, based on right-leaning pollster Rasmussen's partisan breakdown of the electorate. (Scott Rasmussen blurbs: "you cannot compare partisan weighting from one polling firm to another.")

And obviously "re-weighting" every single poll to reflect an electorate made up of a plurality of self-identified Republicans also involves a bit of guesswork! Like, for example, sometimes polls don't include crosstabs, so Mr. Unskewed just assumes they're skewed with liberal media bias, and corrects accordingly.

Rasmussen's party ID makeup does not remotely resemble any other organization's party ID makeup. Every other organization finds that more Americans identify as Democrats or independents than Republicans, and that has been the case for years, even as Democratic Party affiliation has fallen. (Even in horrible years for Democrats, Gallup and Pew find more people identifying as Democrat than Republican.) "Correcting" polls to reflect Rasmussen's outlier party ID finding basically means predicting Romney will win by a wider margin than any candidate from either party since 1988, which is ... unlikely!

Hopefully we all remember liberals engaging in similar delusional polling analysis in 2004. (MoveOn took out an ad accusing Gallup of bias -- and then Gallup's likely voter model ended up slightly underestimating Bush's final share of the vote.) And everyone constantly argues over party ID in all polls every election cycle. But I really don't remember anyone claiming, when Gallup had Bush up by double digits, that Bush was actually losing by double digits. I admire this guy's commitment to the craft of elaborate wishful thinking. You have to read his electoral vote projections.

Michigan: The only disagreement is this columnist looking at the polls RCP shows for Michigan and not trusting any of them, and placing this state in toss up status, and the other four projections putting stock in these polls and calling this state for Obama.

Just that one little disagreement, between everyone who believes the "scientific polls" and the guy who doesn't.

Meanwhile, in reality, Nate Silver says late-September polls have a pretty good track record of predicting the winner of the race, if not the margin. In the cases of the two elections this one has been most often compared to: President Carter was down 3.4 percent in September 1980, and lost by 9.8. President Bush was up 4.5 percent in September 2004, and won by 2.4.

In fact, at this point you have to look pretty hard for examples of underdogs pulling it out: "Of the 19 candidates who led in the polls at this stage since 1936, 18 won the popular vote (Thomas E. Dewey in 1948 is the exception), and 17 won the Electoral College (Al Gore lost it in 2000, along with Mr. Dewey)." But all of those polls and electoral results were skewed, by liberal media bias.