Are the networks finished?

As "Homeland" sweeps the Emmys, "Vegas" shows why the networks always get "serious dramas" wrong 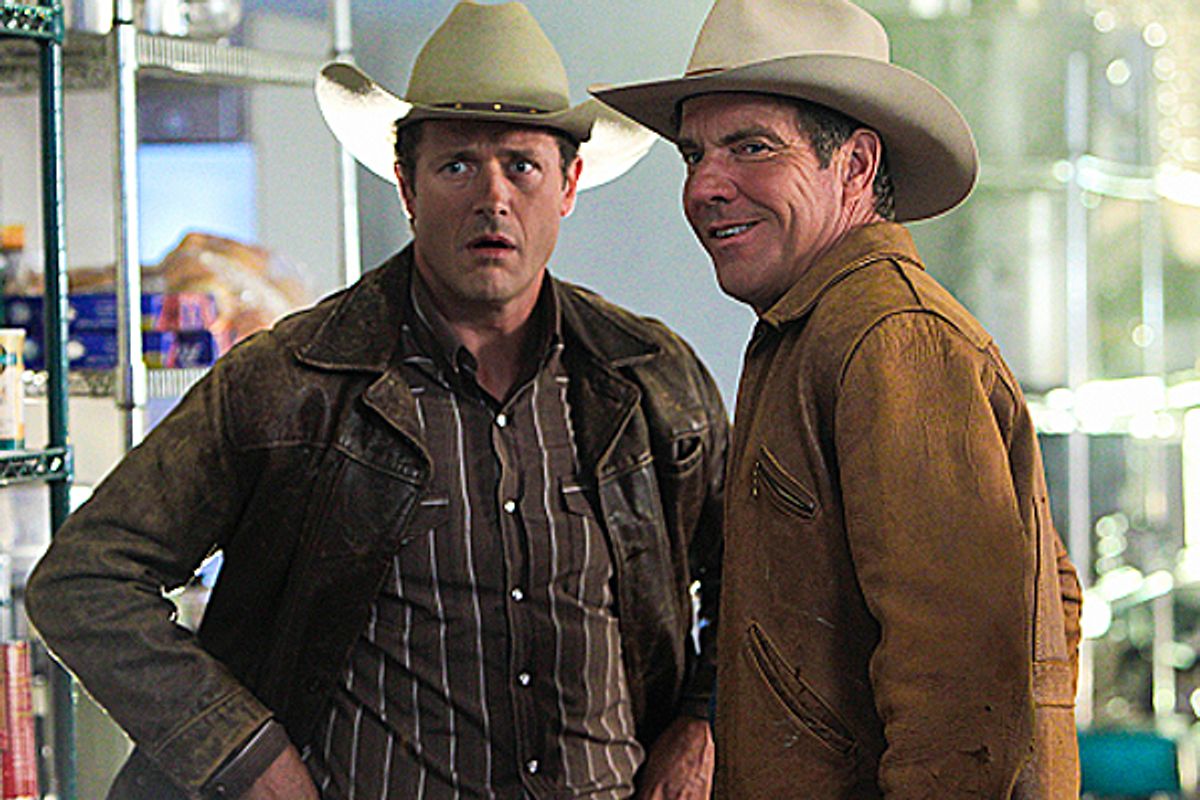 The new period drama “Vegas,” CBS’ attempt to make one of those serious, morally complex, high-minded cable series that command awards and respect, is a tale of two heads. The first belongs to Dennis Quaid, the star of the show. He plays Ralph Lamb, a rugged and laconic rancher in 1960 Nevada, the sort of ultra-competent, no-nonsense guy who just wants to be left alone to tend his cattle and wear his white hat, but is constantly being called on to solve crimes and punch people in an infant Sin City instead. Through an expert alignment of haircut, hair gel and God-given ears, Lamb appears silly without his 10-gallon Stetson on, very turtle without his shell. Ralph’s a cowboy and he looks the part.

The second head belongs to Michael Chiklis, playing casino owner and mob boss Vincent Saviano. (See “The Godfather II,” “Casino” and myriad other Vegas-set Mafioso tales for the archetype.) Saviano wears a hat— black, of course— as was the custom of the day (in 1960, Kennedy was just making hats uncool) and it covers his completely shorn head, decidedly not a 1960s silhouette.  Saviano’s a gangster, but he looks like one imported from the post-Michael Jordan age, not Eisenhower-era America. As these two heads suggest, “Vegas” is willing to go pretty far to commit to its setting and themes, but not all the way.

Unlike other networks' previous, hapless attempts to mint their very own "Mad Men" — "Playboy Club," "Pan Am" and "Magic City," for example — “Vegas” is not embarrassing. But it is just a gussied-up procedural, which would be fine, if it weren't so blatantly aiming to be something more. Set in Las Vegas as it's becoming Las Vegas, "Vegas" has plenty of meaty themes to explore —  corruption vs. the rule of law, development vs. the environment, the country vs. the city — but in the pilot it's focused on Ralph Lamb solving a murder.

His first case is the death of a young woman out in the desert. Some biker gangs, six years away from being immortalized by Hunter S. Thompson, might have something to do with it, or they might not. Lamb, his brother ("Terra Nova's" Jason O'Mara, with a part that finally acknowledges his blandness) and his girl-crazy son ("The OC's" crazy Oliver, all grown up) all work the case, joined by a female ADA played by Carrie Anne Moss, whose anachronistically powerful position goes remarkably unremarked upon. Ralph and his squad are working with horses and rifles and a Native American tracker rather than with high-tech forensic devices, but otherwise the story arc will be familiar to anyone familiar with the beats of  “CSI."

The model for “Vegas” is not so much “Mad Men” as “The Good Wife,” a week-by-week procedural unusually committed to rich, satisfying, long-term story arcs. But “The Good Wife” is a deep, hard-nosed, cynical show, and “Vegas” has cheesier instincts. It's the sort of series that absolutely will show a guy on horseback racing a motorcycle, and have the guy on horseback win. In the show’s climactic chase sequence, Lamb tracks down the murderer as he's getting into his car. Rather than tear after him, Lamb gets out of the car he’s in, so as to better face down the bad guy and his automobile with just a gun. Ralph would rather look cool and risk getting flattened by a coupe doing 80 than take the villain out the safer way. What a swaggering exemplar of the individual American spirit! Have gun, will do something dumb.