"The Waiting Room": Welcome to Romneycare 2.0

A saga of desperation, tragedy and unexpected heroism, this riveting documentary spends 24 hours in a public E.R. 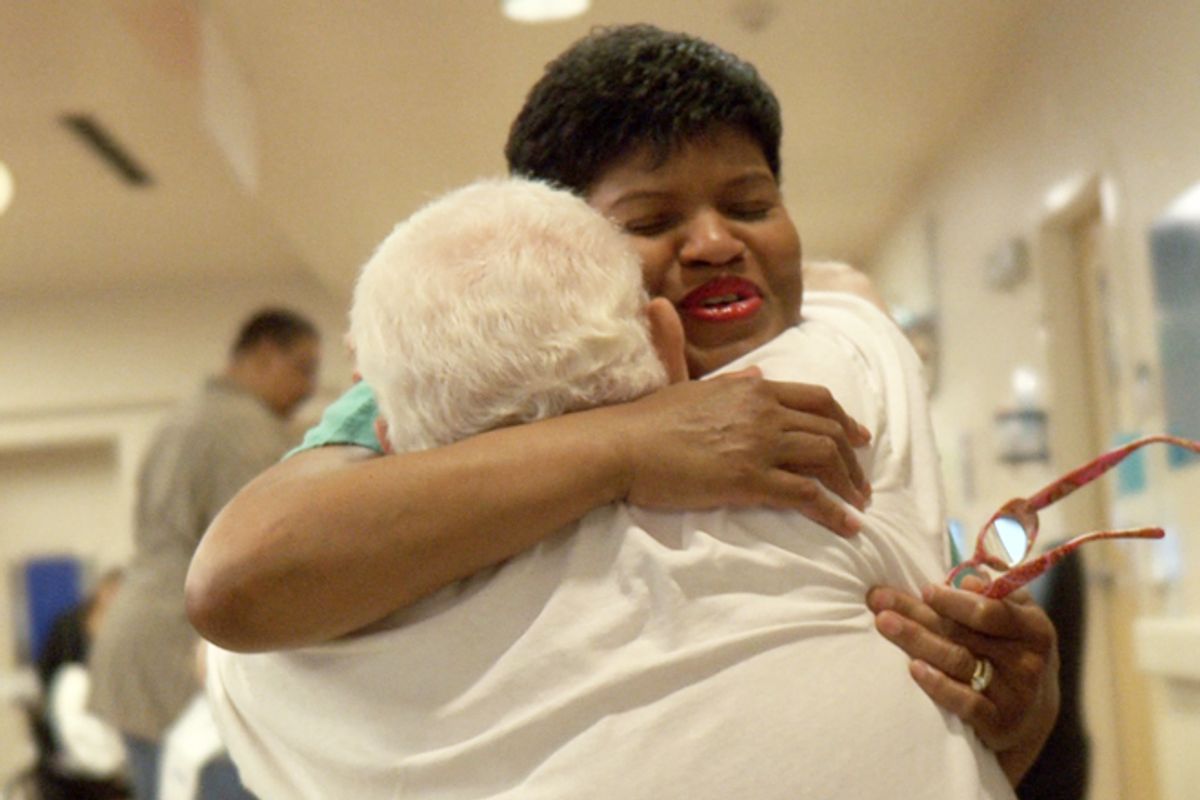 Dr. Douglas White has a problem. Behind him is an overcrowded emergency room at Highland Hospital in Oakland, Calif., and in front of him is a middle-aged homeless man he knows well – a “frequent flier,” in hospital parlance – who literally has nowhere to go. Carl is medically stable, having shown up in the E.R. to recuperate from a long, rough night of drinking alcohol, smoking crack and using methamphetamine. But the local pastor who runs his halfway house is understandably sick of the way he cycles in and out of substance abuse, so White has two choices: Cut Carl loose to fend for himself on the streets of Oakland, or find some pretext to admit him to the hospital.

As White, a laconic, bearded dude of about 35, admits to Peter Nicks’ camera in the urgent and upsetting documentary “The Waiting Room,” he might be pretty upset if he were in the E.R. with a legitimate illness or injury and found out that the whole system had gotten gummed up because no one knew what to do with a crack addict who wasn’t all that sick. But then, almost anyone who comes to Highland – or any other major public hospital in any American city – has by definition fallen through the cracks and has some desperate story to tell. There’s the 44-year-old man with stratospheric blood pressure who had a recent stroke and can barely walk, but who may wait weeks or months for a follow-up appointment. There’s the guy discharged a few days ago with a gunshot wound who has returned because he started feeling numbness, coldness and tingling in his extremities. There’s the dazed, 20-something hippie kid who’s been diagnosed with testicular cancer and needs immediate surgery, but has no insurance and almost no income.

As White’s predicament with Carl makes clear, public hospitals like Highland serve not just as the last, frayed strands of the healthcare safety net but also as social-service agencies of last resort. Nurses, doctors, social workers and aides at such hospitals must confront the failure of American society every single day, providing both lifesaving assistance and routine care to people with no insurance, no regular doctor, no job, no money and very little hope. Mitt Romney recently suggested in a “60 Minutes” interview that emergency-room care of exactly this kind was a viable option for the uninsured, thereby disavowing, in the already infamous style of his 2012 campaign, one of the few genuinely commendable things about his life and career.

As Romney himself has said several times, his Massachusetts healthcare-reform law was largely based on the realization that we were already providing free or subsidized medical care for the poor, but doing so in the most expensive and least effective way possible. In Romney’s book “No Apology,” he explained that if the taxpayer dollars that paid for this kind of last-ditch, public-hospital care were redirected “to help the uninsured buy insurance instead and obtain treatment in the way that the vast majority of individuals did — before acute conditions developed – the cost of insuring everyone in the state might not be as expensive as I had feared.” Now, of course, he’s put himself in the desperate position of running against “Obamacare” — an idea for which he could plausibly claim credit — and supporting the disastrous status quo ante, which you can see in all its glory in “The Waiting Room.”

Political ironies and diatribes aside, what we see in the waiting room at Highland – where Nicks and his team shot this film in a 24-hour stretch in 2010 -- is genuine heroism, a word that gets thrown around way too much in our culture and has lost most of its meaning. For my money, a doctor like White, who is intently focused not just on emergent medical care for the destitute and often desperate patients he sees, but also on providing each of them a fighting chance so they don’t have to come back again in a few days or weeks or months, qualifies. So too does Cynthia Johnson, the unflappable nurse’s assistant who presides with endless dignity, sympathy and good humor over the human tide of all possible colors, creeds and national backgrounds that flows 24/7 through the doors of Highland.

While this is most definitely a portrait of an overburdened hospital whose staff and facilities are stretched beyond their limits, and where some patients with less urgent problems will wait many hours before being seen, there is no cynicism or air of defeat about “The Waiting Room.” (Like many social-issue documentaries, the movie is also meant to spark a social-media activist campaign, and will show up on public TV and other distribution channels before long.) When the most stereotypical kind of urban trauma out of TV drama actually happens — an African-American teenager arrives in an ambulance with a gunshot wound, and doesn’t make it — the air of shock and tragedy among the staff is palpable. Apparently it is not routine, even on the streets of Oakland, to see a young life snuffed out at random. Mercifully, we don’t have to watch the visibly shaken doctor break the news to his family.

Public hospitals in most cities have dreadful reputations, precisely because they have to treat cases like that one, or like Carl the crackhead’s, where the reasons that bring people to the E.R. are intimately tied to urban pathologies of poverty and crime. (I grew up in and around Oakland, where the perception was that you avoided going to Highland if you possibly could.) But what Nicks captures here is a far more democratic and diverse world than you may expect: Latinos, Asians, black people and white people, the middle class and the working class, the homeless, the long-term poor and the newly unemployed, looking dazed in their business suits and facing a new reality. It’s the reality of recession America, the reality of a nation that spends more per capita on healthcare than any other major democracy and gets worse results. Still, in a peculiar way “The Waiting Room” is a source of both inspiration and hope. The system may be broken, but the people are not.

“The Waiting Room” is now playing at the IFC Center in New York, and opens Friday at the Laemmle Monica and the Laemmle Playhouse 7 in Los Angeles. It opens Oct. 17 in Houston, Oct. 19 in San Francisco and San Jose, Calif., and Nov. 30 in Boston and Washington, with more cities and a PBS broadcast to follow.