"Won't Back Down": Why do teachers' unions hate America?

"Won't Back Down" is an offensive, lame, union-bashing drama, which somehow stars Viola Davis and Maggie Gyllenhaal 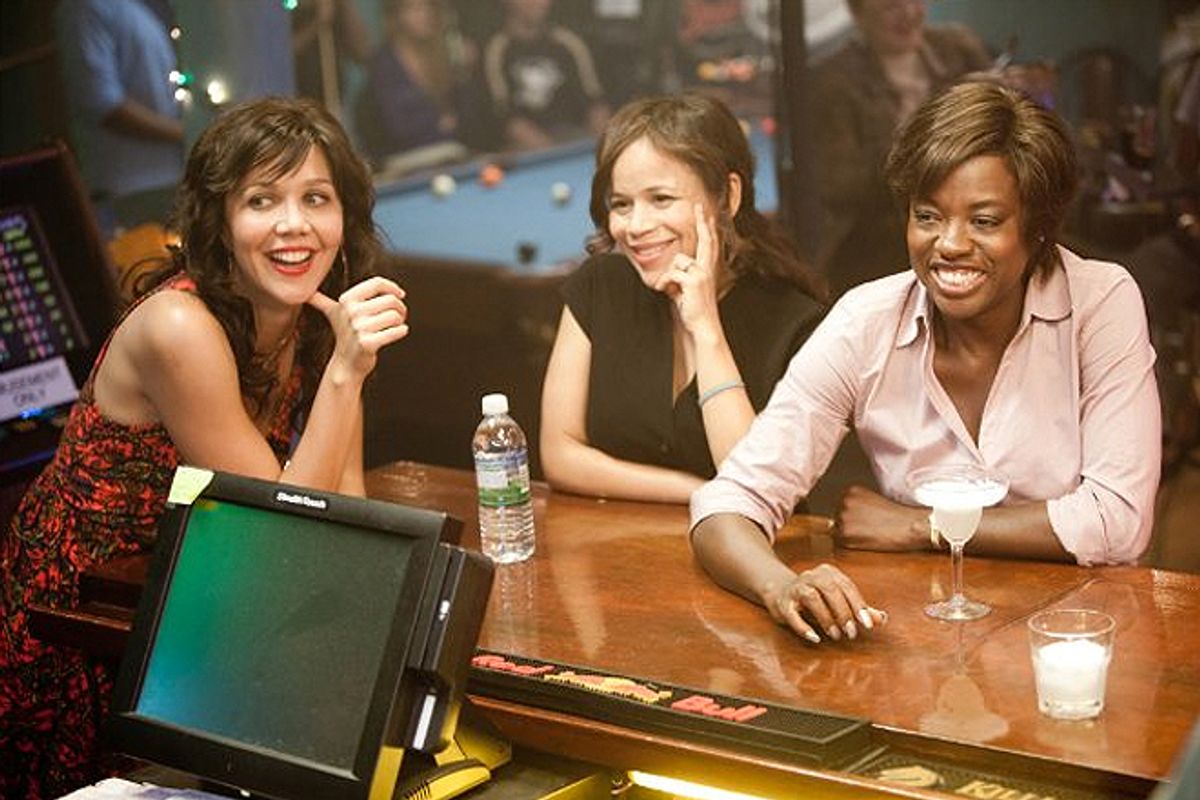 Maggie Gyllenhaal, Rosie Perez and Viola Davis in "Won't Back Down"
--

So teachers’ unions don’t care about kids. Oh, and luck is a foxy lady. This is what I took away from the inept and bizarre “Won’t Back Down,” a set of right-wing anti-union talking points disguised (with very limited success) as a mainstream motion-picture-type product. Someone needs to launch an investigation into what combination of crimes, dares, alcoholic binges and lapses in judgment got Viola Davis and Maggie Gyllenhaal into this movie. Neither of them seems likely to sympathize with its thinly veiled labor-bashing agenda and, way more to the point, I thought they had better taste. Maybe it was that actor-y thing where they saw potential in their characters – a feisty, working-class single mom for Gyllenhaal, a sober middle-class schoolteacher for Davis – liked the idea of working together and didn’t think too much about the big picture.

Perhaps that was a mistake, because the big picture is that the movie is unbelievable crap and the whole project was financed by conservative Christian billionaire Phil Anschutz, also the moneybags behind the documentary "Waiting for 'Superman,'" which handled a similar agenda in subtler fashion. Even though I personally find the politics of “Won’t Back Down” noxious -- and the film seems half-seriously meant to launch some sort of activism, on behalf of whom or what I don't know -- that’s only a small part of the problem. (The politics of “The Dark Knight Rises,” however you want to describe or define them, are probably noxious too.) There’s so much human drama in and around the charter-school movement that it should be easy to tell a powerful story, from almost any perspective you like. Nothing’s off limits in a dramatic context, of course, and given the enormous crap-storm that is American public education, there’s more than enough blame to go around. Let me add that as a known New York City home-schooling weirdo, I hold ambivalent views about the oversize role played in the city’s education battles by its teachers’ union and its longtime head, the fearsome Randi Weingarten. (There’s a Weingarten-like union head played by Holly Hunter in this movie, with Appalachian hard-ass attitude substituting for New York Jewish hard-ass attitude.)

So if you want to make a potent, mean-spirited drama about the failures of unionized schoolteachers and inept education bureaucrats, I say bring the noise. But what director and co-writer Daniel Barnz (whose previous film was the equally stupid “Beastly”) rustles up here is more like simpering, pseudo-inspirational pap, constructed with painful awkwardness and disconnected from any narrative plausibility or social reality. Our two appealing leads beam and glow at each other with an almost hostile brilliance, while supporting stereotypes stand around them delivering on-the-nose platitudes. Even Gyllenhaal’s 500-watt smile and Davis’ permanent air of wounded propriety can’t redeem a script that has that disconnected, amateurish quality distinctive to conservative-oriented entertainment and plays written by fourth-graders. It’s as if the right-wing disapproval of pop culture extends to rejecting the Aristotelian conventions of plot and character. Possibly this film is so avant-garde that I’m not getting it!

Here’s the principal narrative accomplishment of “Won’t Back Down”: It reverses the usual racial polarity in this kind of story, in that it’s Gyllenhaal’s character, Jamie, an endlessly earthy and upbeat bartender-receptionist who favors skin-tight jeans and midriff-baring tops (when she's not wearing her combat-fatigue "Parentrooper" T-shirt), who brings some joie de freakin’ vivre back to Nona, Davis’ burned-out, beige-clad teacher, who describes herself as “the first black Stepford wife.” Jamie convinces Nona to put those middle-class problems up on the shelf and kick back with a virgin mojito, a Pittsburgh Penguins game and a little impromptu Texas line dancing. Because that’s the thing about white folks: We’re all about spontaneous fun, keeping it real, and convincing black people with decent middle-class incomes to give up 150 years' worth of hard-fought progress and work harder for less money. She’s the magic redneck!

Oh, yeah – along the way Jamie the M.R. also convinces Nona to sign up a bunch of her fellow teachers at decrepit and desultory John Adams Elementary (where Jamie’s dyslexic daughter is a student) to help stage a coup that will involve giving up their own union contracts and tenure rights and handing over the school’s leadership to … well, to unknown persons with an unknown agenda. I guess after the revolution Nona and Jamie will be in charge – we’ve seen them wearing glasses and writing some kind of plan on a Dell computer – but we never learn any details except that it includes Shakespeare and a scary amount of ukulele (not at the same time, one hopes).

Hunky Oscar Isaac supplies the ukulele strumming, playing an idealistic and supposedly fun teacher who feels some vague liberal guilt about the whole union-busting thing, but is eventually overcome by healthy doses of Iron City beer and Jamie’s feminine charms. Although, in fact, the movie’s too PG-coy to make clear whether or not they’re lovers, and too dumb to acknowledge that it might be kind of inappropriate for the union-busting rebel leader to get it on with a supposedly loyal union member. Isaac's character is supposed to be preferable to Jamie's daughter's deadbeat teacher, who sits at her desk sending texts all day, but the whole time my inner third-grader was protesting: Criminy, just don't put me in that douchey ukulele guy's class!

“Won’t Back Down” was reportedly inspired by a California law that allows parent-teacher takeovers of failing schools under certain circumstances. Again, that sounds like a fascinating premise, albeit one that’s highly likely to go in unforeseen “Animal Farm” directions. But all we get here is the most blithe and moronic kind of “let’s put on a show” magical thinking, in which ripping up the union contract and wresting control of the school from the bureaucrats becomes an end in itself, and what happens later is shrouded in the mists of an imaginary libertarian paradise. There are attempts at Fox News-style balance here and there, as when someone observes that most charter schools fail to improve outcomes and when a bombastic union exec played by Ned Eisenberg delivers a monologue about the current assault on labor (right before announcing that he couldn't care less about children).

As presented in this script (written by Barnz and Brin Hill), the Pittsburgh teachers' union has no goal beyond protecting the status quo at all costs, and no interest whatever – no altruistic interest, no self-interest and no public-relations interest -- in improving the quality of public education. Most people still understand, I believe, that teachers work extremely hard for little pay and low social status in a thankless, no-win situation. But this is one of those areas where conservatives have been extremely successful in dividing the working class, which is precisely the agenda in "Won't Back Down." Breeding hostility to unions in themselves, and occasionally insinuating that unionized teachers are a protected caste of incompetents who get three damn months off every single year, has been an effective tactic in what we might call postmodern Republican populism, especially in recent battles over public employee contracts in Wisconsin and elsewhere. It works something like this: 1) Turn the resentment and frustration of people like Jamie – people with crappy service-sector jobs and few benefits, whose kids are stuck in failing schools – against the declining group of public employees who still have a decent deal. 2) Strip away job security and collective bargaining; hand out beer and ukuleles instead. 3) La la la la, tax cuts, tax cuts, I can’t hear you!