He might not cook meth, but Romney has a lot in common with the "Breaking Bad" character 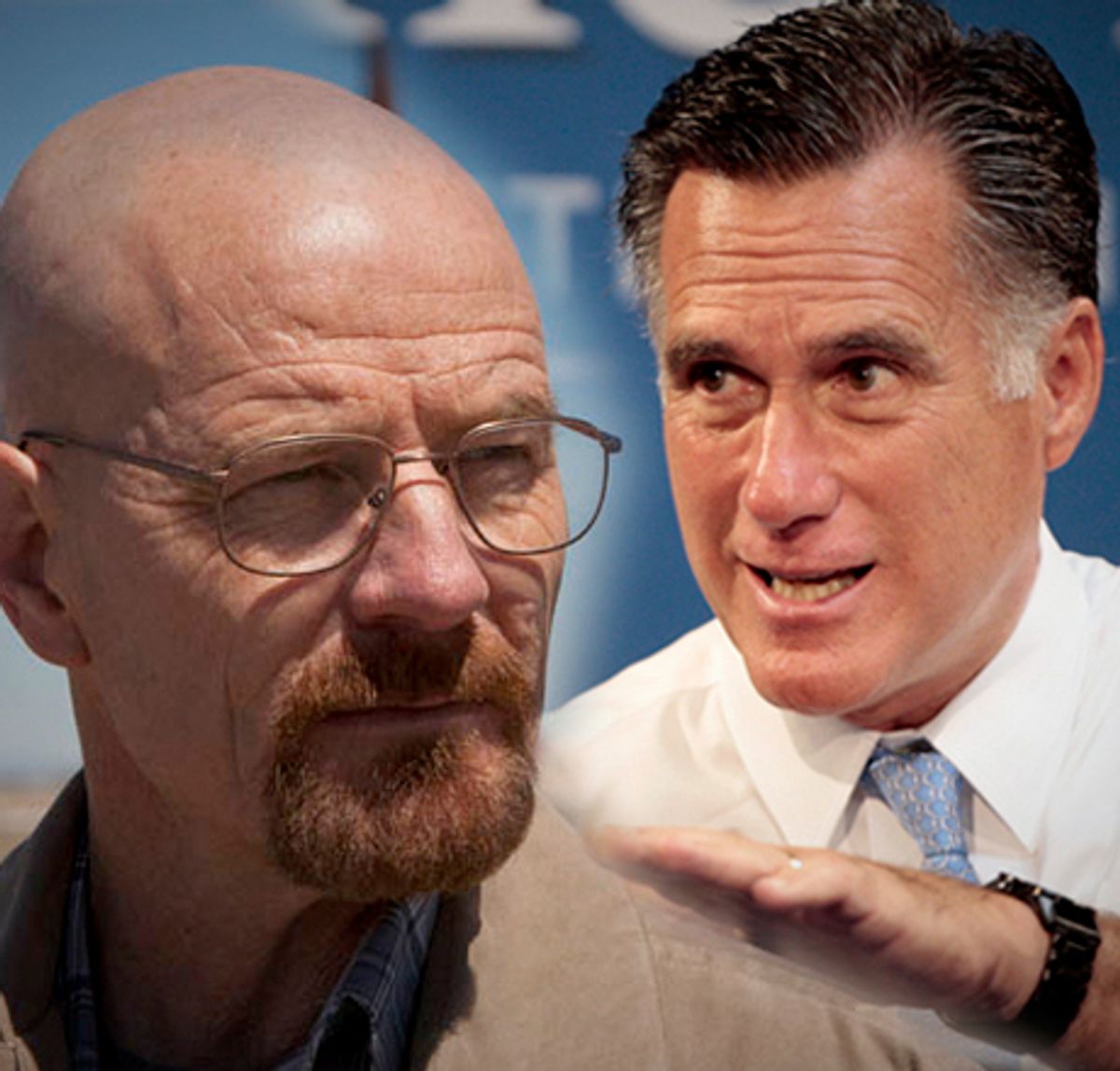 On the surface of things, patrician Mitt Romney doesn't have much in common with Bryan Cranston’s iconic "Breaking Bad" character, Walter White, a high school chemistry instructor. First of all, Walter probably has less of a desire to bust teachers' union strikes. Plus, Romney has better hair, wouldn’t need to cook meth to support his family in the wake of a lung cancer diagnosis, and is (maybe?) less of a sociopath

But go beyond the surface, and the two men — one an unbelievable fictional creation, and the other Walter White — have much in common. Spoilers ahead for "Breaking Bad" and probably November’s election results.

Likewise, Walter doesn’t second-guess his decisions; he doubles down on them. “I’ve done a terrible thing,” he tells his wife, Skyler, after revealing his secret career and a duffel bag full of cash, “but I've done it for a good reason; I did it for us.” Later, when Skyler convinces him to tell their DEA agent brother-in-law Hank that the money is the product of an innocent gambling addiction, Walter refuses to preface the lie with “I’m terribly, terribly ashamed of my actions,” because “I would just never use that word.” No apology, indeed.

Business skills: Romney might lack basic empathy, but he’s a talented businessman, having built a private equity empire by making deal after deal. He has criticized President Obama for having “no experience in the private sector, no experience in negotiation.”

But Romney would admire Walter White’s hardball game: talking lowlife attorney Saul Goodman down from a 17 percent commission to 5; talking drug/chicken kingpin Gustavo Fring into hiring him because "my product … is impeccable; it is the purest, most chemically sound product on the market anywhere"; and then talking Fring into sparing his life over and over. (As for “downsizing” co-workers? Walter doesn’t exactly have a problem with that either.)

Disastrous Impulsiveness: While the U.S. ambassador to Libya and three others died in an attack on the American embassy, Romney’s knee-jerk reaction was to imply that the Obama administration “sympathize[s] with those who waged the attacks.” It wasn’t a well-thought-out strategy — if “strategy” is even the right word — and even brought condemnation from many in his own party.

At Walter White’s first meeting with Fring, the latter tells him, “I don’t think we're alike at all, Mr. White. You are not a cautious man at all.” Walter is certainly capable of implementing a labyrinthine scheme (see: "Breaking Bad’s" fourth season finale), but he’s more likely to fly off the handle with unfortunate results, such as by offing business partner Mike Ehrmantraut over a petty insult. At least Walter didn’t smirk and walk away.

Multiple personalities: Walter White is just as comfortable wearing the hat of wholesome family man as he is wearing alter-ego Heisenberg's cap. His personality changes drastically from audience to audience, much like how Romney can speak with absolute authoritativeness on both sides of nearly every issue, from abortion to gay rights to the environment to healthcare. Perhaps this inconsistency bothers Romney at some deep level — but as for Walter? “I sleep just fine.”

Financial cartwheels: Walter doesn't stash his fortune in the Caymans and Switzerland like Romney, but he’s not exactly candid with the IRS either, laundering his loot through a car wash front and a cancer charity that his son set up for him. Ultimately, Skyler just piles the cash in a rented storage unit — because she knows how bad those tax returns would look.

Recruiting a sidekick who can play the game: Without Jesse Pinkman’s distribution network, Walter White would just be a nerdy guy in pleated khakis with a slick pitch. Without Paul Ryan’s Tea Party credibility, Mitt Romney would just be ... uh ...

Crappy at hiding true colors: The Obama campaign loves to depict Romney as someone who only cares about the wealthiest citizens, and Romney falls into this trap again and again — whether it’s his “47 percent” moocher comments or bragging about his wife’s “couple of Cadillacs” or mocking rain-drenched NASCAR fans for their cheap plastic ponchos.

He must know how much damage these gaffes cause him, but he just can’t stop — kinda like how Walter White carelessly leaves clue after clue for Hank. For example, when Hank guesses that deceased chemist Gale Boetticher was Heisenberg all along, egomaniac Walter goes nuts and explains that Gale was a rank amateur, so therefore Heisenberg must still be on the loose. Maybe he’d even bet $10,000 on it?

Losing their souls from pursuit of power: Back in "Breaking Bad’s" first season, Walter White hesitated to take a cartel member’s life, even making a list of reasons to let him go. By Season 2 he lets Jesse Pinkman’s addict girlfriend drown in her own puke; by Season 3 he’s ordering a hit on Gale “because if I’m the only chemist that [Gus]'s got, then I got leverage and leverage keeps me alive”; by Season 4 he’s poisoning a child; and by Season 5 he’s as trigger-happy as Tony Montana. He is the one who knocks.

Meanwhile, Romney went from guaranteeing medical insurance for all Massachusetts residents, even those with preexisting conditions, to defining the sick, elderly and poor as “entitled” leeches who will “never ... take personal responsibility and care for their lives.” Now he's suggesting that the uninsured go to emergency rooms for basic medical needs, despite the enormous cost. (The E.R. isn't for a common cold; it's for when a middle-aged bald dude slips you Lily of the Valley.) Maybe that’s just politics, but it’s certainly not breaking good.