Why Ryan is worse for Romney than "47 percent"

The election ain't over, but when it is, Mitt might regret his running mate pick more than his hidden camera talk 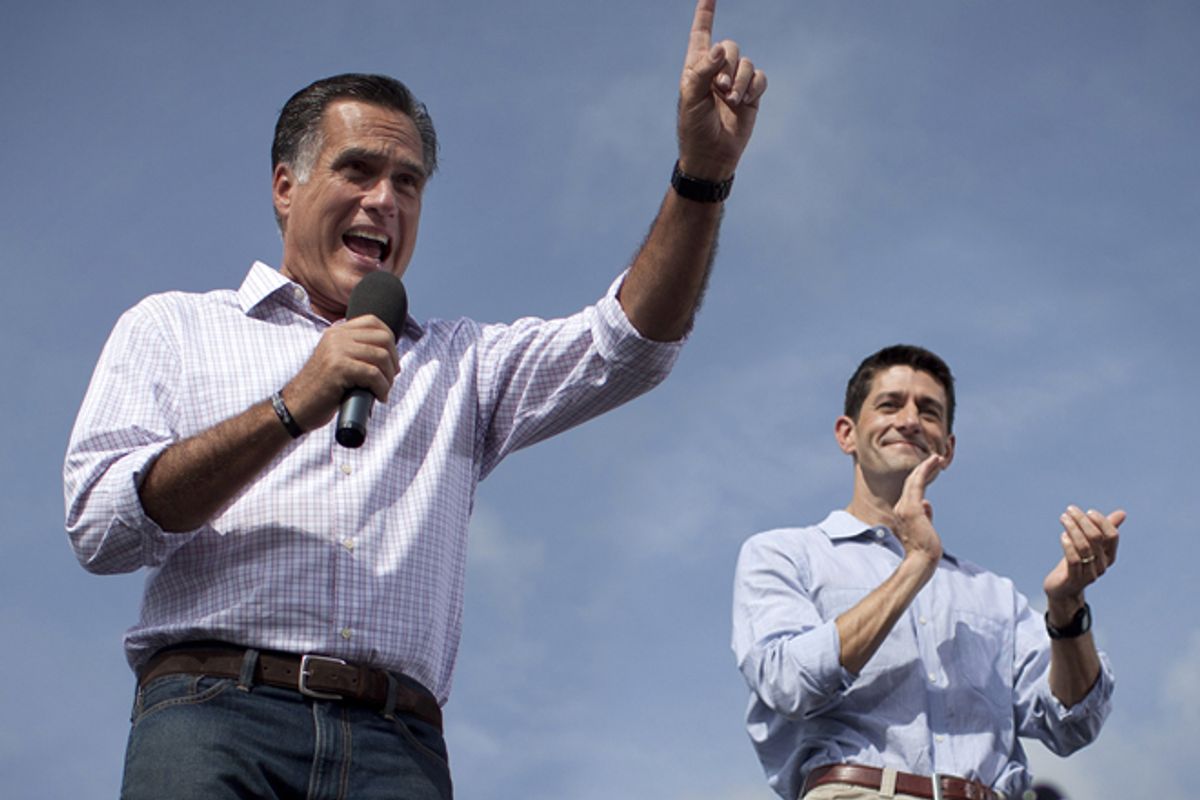 Jonathan Chait joins the chorus of pundits saying Romney's hidden camera "47 percent" comments may cost him the presidency. It's certainly not an unreasonable claim: The video reinforces most of the things voters hate about the guy and it won't help him reach disaffected former Obama voters. But I think Romney truly shot himself in the foot before that tape emerged, the day he selected Rep. Paul Ryan as his running mate.

Here is your requisite disclaimer that a) there is still a decent chance of a Romney victory and b) the science suggests running mates don't have much of an impact on presidential election results. But the science also says that about "gaffes," and if Romney loses, I think the Paul Ryan selection will have hurt him more than the 47 percent video. For two reasons:

Do you know what Old People love? Their socialized healthcare. Mitt Romney picked, as his running mate, a man famous primarily for formulating a plan to eliminate the single-payer healthcare system our old people would kill to defend. (And then Romney refused to sign on to Ryan's BOLD plan, making the pick doubly useless.) The Washington Post has the poll that backs up the obvious point (via Kevin Drum): People Mitt Romney needs to win this election hate his running mate's plan.

Asked whom they trust to deal with the Medicare program, Ohio voters side with Obama over Romney by a 19 percentage-point margin. The president has a 15-point advantage on the issue in Florida and a 13-point lead on it in Virginia. In a separate national poll from the Kaiser Family Foundation released Thursday, Obama’s 17-point lead over Romney on Medicare is larger than it has been across public polls all year.

The importance of Medicare as an issue also boosts Obama more directly: In the three Post-Kaiser state polls, voters who call Medicare an “extremely important” voting issue side with him over his challenger, 59 percent to 36 percent, while those seeing it as less than very important tilt toward Romney, 54 percent to 36 percent. Even among political independents, Obama support is higher among those putting higher priority on the issue than among those less apt to focus on it.

Democrats will always have an advantage on the "socialized healthcare for old people" issue, because they invented it, but Republicans had an unprecedented chance this year to make it work for them, because of the widespread racialized belief that Obama "raided" the program to give healthcare to undeserving poors. Romney basically ruined his potential advantage for no discernible reason by picking the author of an actual plan to destroy socialized healthcare for everyone. That was stupid.

At the Corner, Kathryn Jean Lopez interviews former Bush administration Homeland Security official and current right-wing think tank guy Matt Mayer, and Mayer presents an almost remarkably clear-eyed and honest assessment of Romney's increasingly dire chances. "In terms of the broader election," Mayer says, "I don’t want to be the one who contradicts Karl Rove’s view that Romney can win without Ohio, but he can’t."

Mayer also makes an interesting point I hadn't considered before: Ohio Gov. John Kasich is a poor partner for Romney because Kasich's argument is that Ohio is doing great under his leadership, and Romney's argument is that America as a whole is suffering as she never has before.

There are a number of reasons why Romney can't dent Obama's lead in Ohio, like his opposition to the auto bailout and Obama's superior "ground game" and significant head start in the state. It's also true that the 47 percent video is not going to help. But the 47 percent video is only just now becoming an Obama ad, and Romney's troubles in the state predate the tape's release. In fact, according to TPM's polltracker, Obama began pulling away -- after a decent Romney convention bounce -- in late August. Romney picked Paul Ryan in early August. Is Ryan actively hurting Romney in Ohio? Probably not that much. But he's obviously not helping.

That's a really good question, Matt Mayer! Would Rob Portman have made Romney the favorite in Ohio? Probably not, but it wouldn't have hurt to have a very popular local guy who's won statewide election before, by a large margin, on the ticket.

Instead Romney picked a divisive representative from a state with 10 electoral votes.

Portman was the "boring," safe choice for a reason. Sometimes you don't go BOLD.