If you need help docking your large boat, Romney's your man. That's become a problem for voters 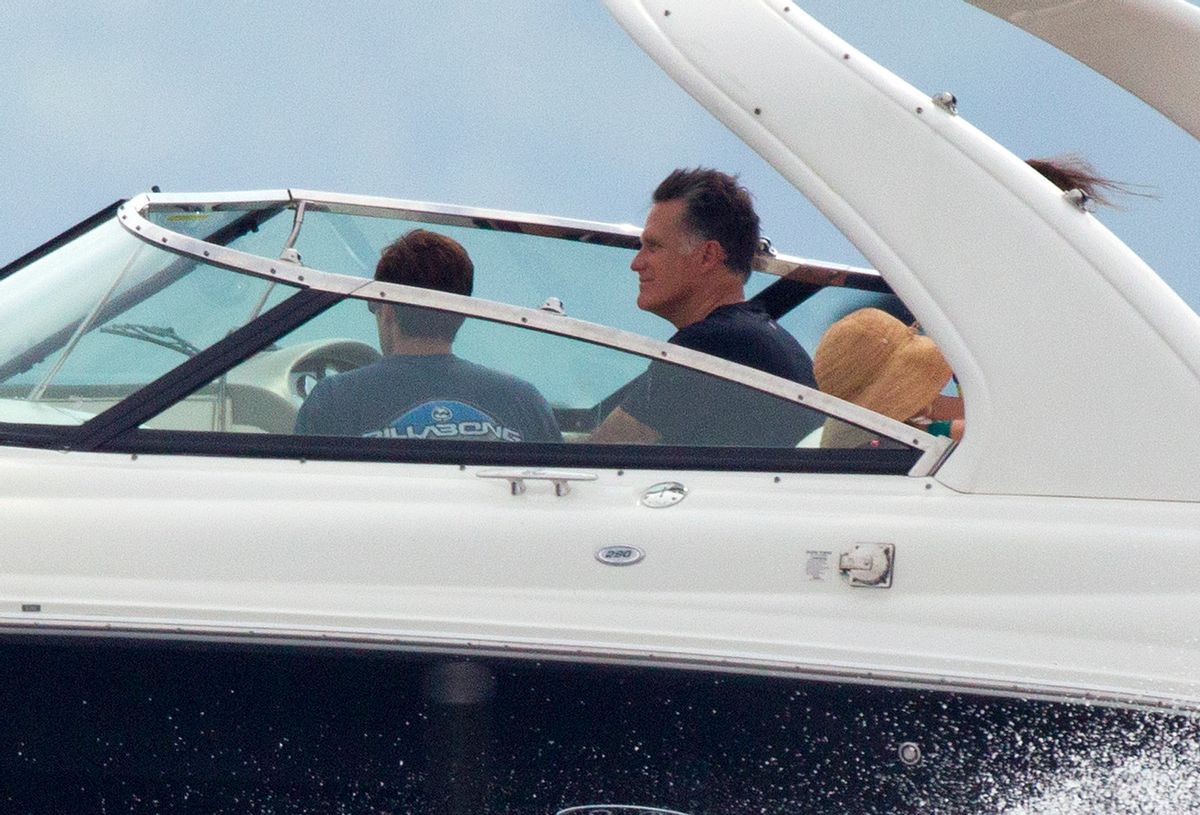 At a recent fundraiser, Bill Marriott, chairman of the international hotel conglomerate, introduced Republican presidential candidate Mitt Romney by noting that they both have summer houses on Lake Winnipesaukee in New Hampshire.  Marriott told a story of taking his boat into town with his grandkids to get ice cream:

And we got into the docks and they were all full and I looked around, there was no place to park, so we stopped at the end of a dock. They all jumped off and ran up the dock. And I realized there was nobody in the boat to help me dock the boat, handle the ropes, do anything - they just left me out there at sea. So I finally found a place to park after about 20 minutes, and I pulled in, I said, 'Who's going to grab the rope?,' and I looked up and there was Mitt Romney. So he pulled me in, he tied up the boat for me. He rescued me just as he's going to rescue this great country.'

No doubt all of the big donors in the room who have boats so big it takes more than one person to dock them were nodding along and thinking, “Yeah, Mitt Romney understands us rich people and is here to help.”  Of course, for the 99 percent of other voters, that is precisely the problem.

The issue is not that Romney is wealthy.  There have been many successful, wealthy candidates in American history — Kennedy, both Roosevelts, obviously plenty of members of Congress.  In fact, it’s worth noting that President Obama’s net worth far exceeds that of the average American family.

The issue is that Romney seems out of touch.  He just does not seem relatable and sympathetic with ordinary people and their struggles.  It is this — and not his bland personality, his bad campaign management — that is sinking Romney’s candidacy.

In her RNC speech, Ann Romney tried to simultaneously make her husband appear more human and more Everyman by talking about their run-down first apartment where “our dining room table was a fold-down ironing board.”  But the fact that both Ann and Mitt came from extremely wealthy families and Mitt was studying at Harvard Law and Business schools at the time, paid for entirely by his father, makes this colorful, cherry-picked detail look desperate — not as in desperately poor once upon a time, but desperate for trying to pretend he ever really knew financial hardship.

An illustrative lesson comes courtesy of the Bush family.  In 1992, George H.W. Bush was tripped up in his reelection bid when he couldn't name the price of a gallon of milk during a debate. Fast-forward to 2004, and George W. Bush — who had arguably all if not more of the baggage of growing up rich and privileged — won a much-touted poll question of which candidate voters would rather have a beer with.  The younger Bush wasn’t any less wealthy than his father, he was simply more likable and relatable.

When Mitt Romney, trying to make nice with an audience of autoworkers, says that his wife has “a couple of Cadillacs,”  that isn’t just a gaffe.  It’s a revealing window into the mind and heart of a candidate who somehow doesn’t understand how incredibly different his life is from that of ordinary Americans and doesn’t see any need to respectfully and reflectively act accordingly.  Again, the problem isn’t that Romney is rich.  The problem is that Romney is elitist.

Remember when Romney said to a group of out-of-work voters, “I’m also unemployed”? When he said you should “never get involved in politics if you have to win an election to pay a mortgage”?  When he offered to bet Rick Perry $10,000?  And, of course, his lofty dismissal of 47 percent of Americans as irresponsible, dependent victims?  He’s not just a bumbling guy who’s bad at campaigning.  Mitt Romney is a snob.