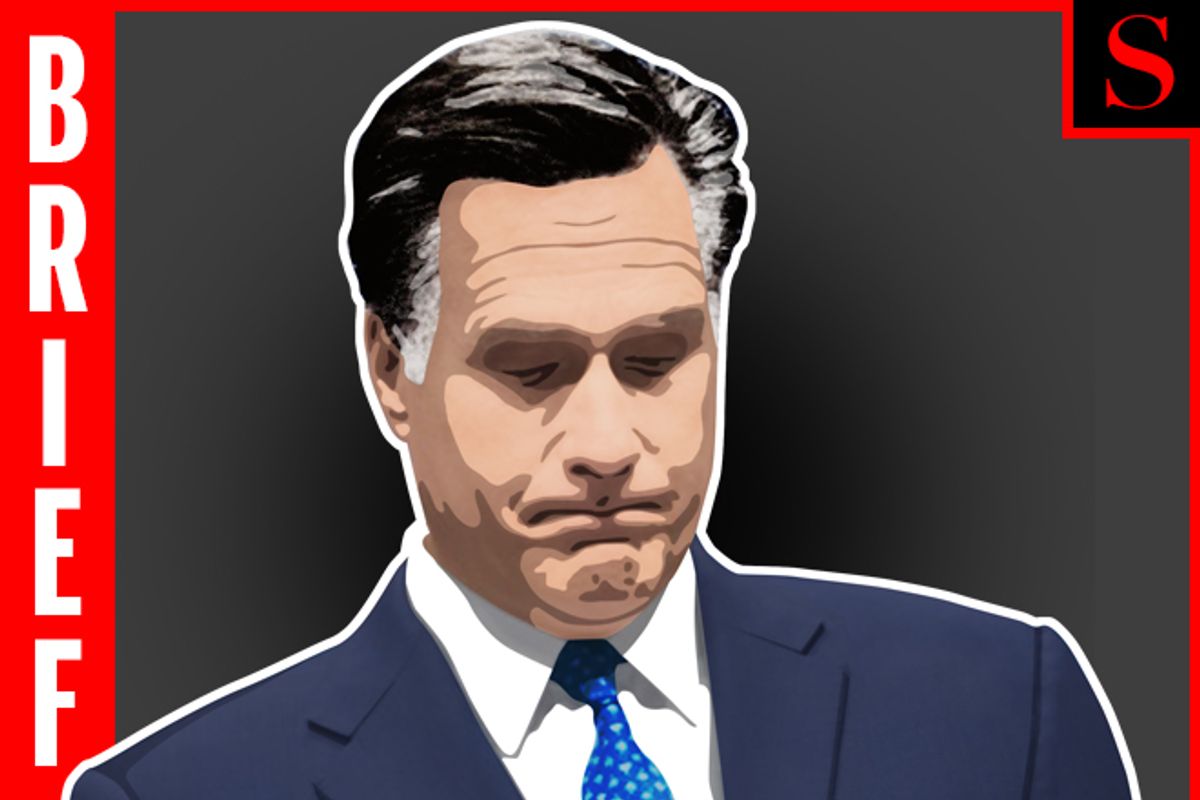 Shows him for keeping Bush out of the RNC: Mitt Romney is now less popular that George W. Bush, according to a new Bloomberg survey. It’s ironic, considering that the former president became so unpopular by the time he left office that Romney and other Republicans tried to distance themselves from him. But Romney cannot distance himself from himself. The poll shows Bush with a 46 percent favorable to 49 unfavorable rating, compared to Romney's 43 percent to 50 percent. Bush also barely fared better than Joe Biden, who was underwater by 3 points, and the Republican Party as a whole, which was underwater by 5 points.

Jews still support Obama: Despite Republicans’ concerted effort to weaken Jewish support for Obama, a new American Jewish Committee (AJC) poll finds the community supports the president by overwhelming margins. Sixty-five percent support Obama, while 24 percent support Romney, with 10 percent undecided. When asked preferences, the undecided split 63 percent for Obama and 27 percent for Romney. For years, Republicans have been trying to cast doubt on Obama’s handling of the U.S.-Israeli relationship and Iran’s nuclear program, but the poll found broad support for the president on these areas. The margin is still about 10 points smaller than what Obama won in 2008.

Benghazi attack linked to al-Qaida: Contradicting earlier official narratives of the incident, U.S. officials said yesterday that they have determined that the attack on the U.S. diplomatic mission in Libya involved a small number of militants with ties to al-Qaida in North Africa, but said they see no indication that the terrorist group directed the assault. The determination reflects an emerging consensus among analysts at the CIA and other agencies that has contributed to a shift among senior Obama administration officials toward describing the siege of U.S. facilities in Benghazi as a terrorist attack. The administration had earlier said it was an organic attack that grew out of protests, prompting cries from Republicans that the administration was hiding facts to make the narrative less politically damaging. Even so, officials now say there were perhaps only two or three al-Qaida in North Africa members present, and that a local Islamist group played a more central role.

Anti-Islam filmmaker arrested: The man who allegedly produced the film that sparked Middle East protests was arrested yesterday in California for violating his parole. Nakoula Basseley Nakoula, the alleged filmmaker, was convicted of bank fraud in 2010, and his parole terms forbid him from using computers and the Internet without supervision, a prohibition he apparently violated. He was arrested by federal authority and denied bail because the judge deemed him to be a flight risk.

Obamacare up: Support for Obamacare has ticked up slightly, according to a new Kaiser Health Tracking Poll, which found that 45 percent of U.S. adults have a favorable view of the healthcare law, while 40 percent have an unfavorable view.  That’s the highest level of support since the months immediately after the law  passed. The rest of the poll has other good news for Obama, showing him to be more trusted than Romney on Medicare by a 20 point margin. However, it found that two in three seniors think Obamacare cut Medicare, a mischaracterization the Romney campaign has been pushing hard.