Why Mitt Romney is the perfect GOP candidate 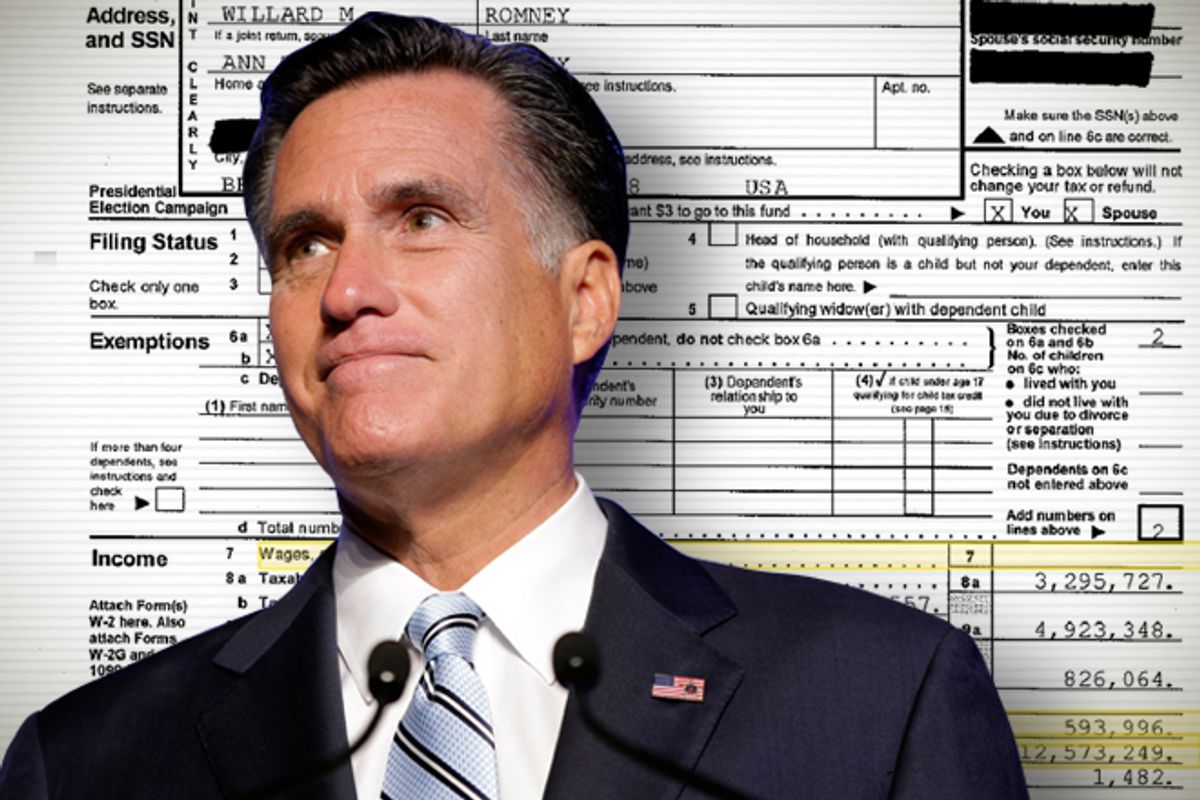 Ever since Mitt Romney began running for president pundits have marveled and conservatives have moaned at the contradiction embodied by the former governor of Massachusetts. A moderate Republican who passed universal healthcare and tried to run to the left of Ted Kennedy on abortion sought -- and won! -- the nomination of a party that had been moving hard right for decades. The result of the primary campaign of 2012 posed a marvelous mystery. How could such a bad mismatch for the Republican base successfully become their standard bearer?

Romney's competition -- a cavalcade of loons and crazies the likes of which hadn't been gathered together since the movie "Freaks" -- offers a partial explanation. Romney got lucky.

But there's another way to view his candidacy -- a frame in which Romney is the perfect representative of what 30 years of Republican ascendance in American politics have wrought. The truth is, there is no mismatch. Conservative economic policies -- union busting, deregulation, tax cuts that favor the rich -- have delivered an era of income inequality unprecedented in American history. That's Mitt Romney's America. No politician currently operating in America better encapsulates the divergence of class outcomes resulting from those policies. If he were to somehow get elected, his victory would be the period at the end of the Reagan revolution sentence. Mission accomplished, indeed.

The data are clear. Ever since 1980, working men and women in the United States have been getting screwed. Or, to put it in the more restrained language of a new paper released this week by the Federal Reserve Bank of Cleveland, "Labor income has been declining as a share of total income earned in the United States for the past three decades."

Let's break that down a little further:

"Household income comes in two types: labor income, which includes wages, salaries, and other work-related compensation (such as pension and insurance benefits and incentive-based compensation), and capital income, which includes interest, dividends, and other realized investment returns (such as capital gains). During the last three decades, labor’s share of total income has declined in favor of capital income."

Whom do we know who fits into that capital income box? Seems to me that just the other day I was scanning through a really long tax return -- oh yeah!

Could it be any more clear? Mitt Romney is the living incarnation of the flip side of labor's declining share of income. What working men and women lost, he gained.

And he's the Republican presidential candidate for 2012.

Seriously, that's pretty epic! Mitt Romney is the truth of Republican economics made manifest, the word of trickle-down gospel become flesh. More so than any of his GOP presidential predecessors, Romney exemplifies the changes of the last 30 years. Forget about the flip-flops on abortion, gay rights, healthcare, immigration -- you name it. In terms of the practical consequences of the application of Republican economic ideology, Mitt Romney is the perfect Republican candidate.

Republicans increasingly don't believe in evolution, but if we review the class background and job resumes of the recent Republican presidents leading up to Romney, it's hard to avoid the sense that natural selection is at work. In the harsh environment bequeathed to us by Reagan's heirs, only the plutocratic parasite can survive.

The story begins with Ronald Reagan. Don't forget: He was a real working man, an actor who got involved in organized labor as the president of the Screen Actor's Guild (given current standards of rhetoric, you could even call him a one-time union thug!).

Then came George H.W. Bush. Sure, he was the son of a senator and a Connecticut blueblood, which made him an awkward graft onto the Reagan family tree. But he was also a successful oilman. He played an undeniably constructive role in the economy, extracting energy from the ground to fuel the industrial machine. A boss, not a worker, but clearly part of the means of production.

Next up, George W. Bush, an unsuccessful oilman. But hey, he went to business school -- he was our first "MBA president." We can now see mutations beginning to bear evolutionary fruit. Pushing numbers around a spreadsheet has now become more advantageous than digging stuff out of the ground or sweating for an honest wage on a Hollywood sound stage.

Finally, we come to Mitt Romney -- the private equity wheeler-dealer, a practictioner of a business model that depends on using borrowed money to purchase struggling firms, after which the new owners extract as much profit as possible in the short term before moving on. A man far, far richer than any of his predecessors, a man, for crying out loud, whose wife owns a horse whose yearly upkeep costs more than the average American earns in a year.

The fossil record cannot be denied. The evolutionary class war is over. Mitt Romney won.

It's hard to think of anyone who could have benefited more from the changes of the last 30 years than Mitt Romney. The tax cuts pushed through by Reagan and Bush disproportionately reward him. The tsunami of union-busting touched off by Reagan's breaking of the air traffic controller union signaled the beginning of an era in which workers would be powerless to resist the savage cost-cutting strategies of the Bain Capitals of the world. Larger trends -- globalization, deregulation, technological progress -- all served to undermine the power of the worker at the expense of the boss. As median incomes have stagnated or fallen, CEO compensation skyrocketed.

A world of income inequality is Mitt Romney's world. He owns it -- the rest of us just live in it.