Is Obama too inscrutable to impersonate?

Obama's blend of cool and reserve has proven tough to imitate, and it's dragging down "Saturday Night Live" 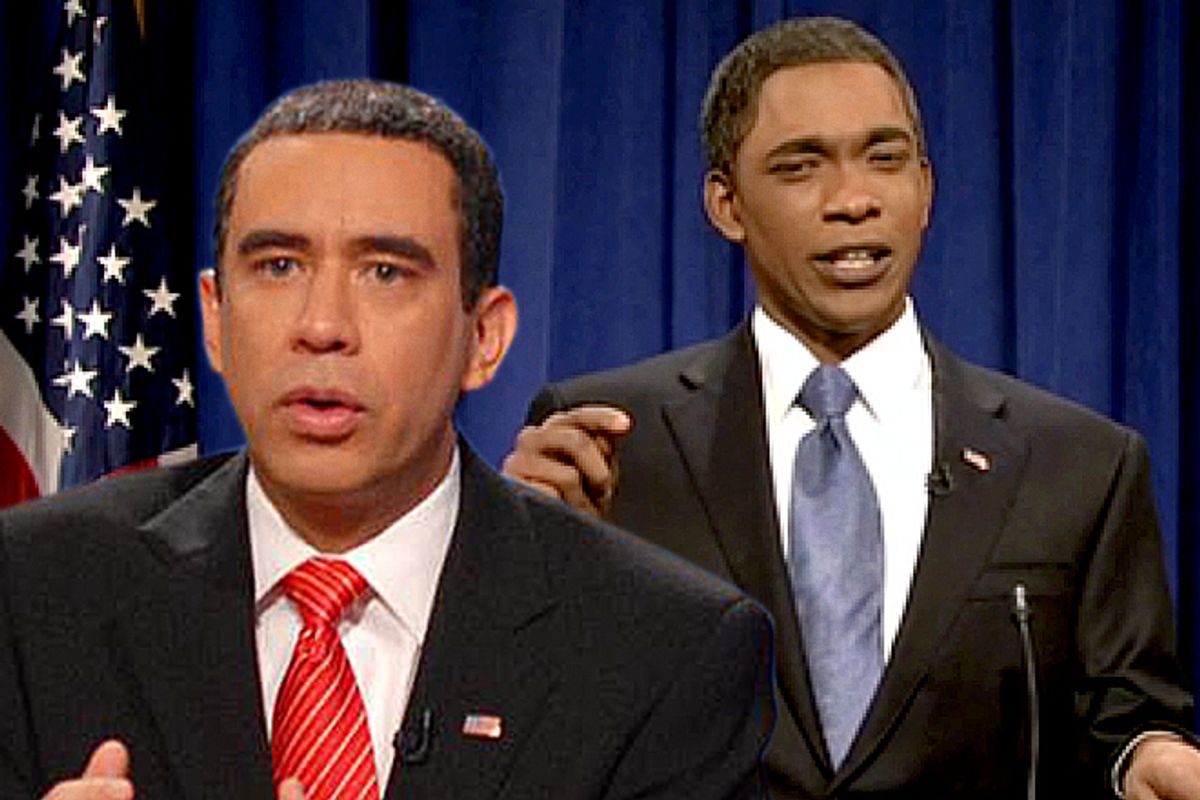 For a comic, trying to impersonate the self-possessed, intellectual manner of President Obama is about as thankless a task as having the world leader’s job. It takes a level of mastery, creativity and maybe even a little perversion to chip away at Obama’s impenetrable reserve, and wedge your way into — or invent whole cloth — his inscrutable psyche. Keegan Michael Key and Jordan Peele, better known as Comedy Central’s comic duo Key and Peele, are arguably the best in the Obama-impression biz, with their “Obama’s Anger Translator” shtick: Peele plays Obama as the carefully compartmentalized, deliberately even-keeled, poised and well-spoken world leader, while Luther (Key), his unabashedly angry black sidekick — the id to the president's superego — parses the subtext of his words, and translates them into a profanity-laden raging tirade. (Here they are on the 47 percent.)

On “Saturday Night Live,” Fred Armisen was bestowed with the honor for four years, and during the last election, he played Obama as cool but green, a first-time, self-confident presidential candidate leaning heavily on the expertise and experience of an exasperated and resentful Hillary Clinton (pitch-perfectly portrayed by Amy Poehler). With so little time before the next election, it seems a curious decision by “SNL’s” executive producer Lorne Michaels, to swap the veteran for newly promoted to full-time cast-member Jay Pharoah this late in the game. (It’s one thing to recast Bobby Draper on “Mad Men” every year, but, c’mon, did you think we viewers wouldn’t notice when “SNL” uses Obama in nearly every cold open?)

Pharoah is an incredible mimic — he can practically channel Denzel Washington or Will Smith — and his voice more closely resembles the president’s than does Armisen’s. (For the record, I think Pharoah, who was brought on "SNL" to do impressions, is actually far better as a sketch comic: “The Finer Things” skit he did with Kenan Thompson, a talk show celebrating the opulence in hip-hop, in last week’s episode had me on the floor. More of this, please.) But mimicking and exaggerating a voice and gestures and tics are only part of what composes a good impersonation. It’s shtick, a doodle that hasn’t quite taken on the heft of a caricature — there’s no dimensionality, no punch line.

The season premiere’s opening sketch debuted the new Obama (introduced by Armisen, which had to have been weird for all involved parties). Was Michaels anointing Pharoah, or conceding the throne to him? He would seem to have taken on an underminer-y role by underlining for the viewer everything that was lacking in Pharoah’s rendering of the president by having the camera continually cut to the more seasoned Jason Sudeikis as he played Mitt Romney. Was this a teachable moment? If so, that's some tough love, doing it in front of a live national audience.

Pharoah has focused his energies on the Obama voice, his articulation, the professorial way he punctuates points with clenched hands. And he made one choice: to render him an arrogant dick. (He hasn't evolved it further, based on this past Thursday's special edition of "SNL.") Contrast this with Sudeikis, who, since first taking on Romney, has concentrated less on the timbre and tenor of the candidate’s voice, and more on a particular element of his persona — Romney’s pathetic pandering, and his astonishing inability to connect with the middle and working class, gays, people of color. Sudeikis' Romney is straightforward, simple and maybe obvious, but no less funny for it. It's a Romney who offends potential voters every time he opens his mouth, and then can’t dig himself out of the hole he’s sinking in.

“SNL” has long been celebrated for its tradition of political impressions, which date back to 1976, with Chevy Chase sending up President Gerald Ford. Chase never tried to look or sound like Ford. He created a Ford out of one or two notable personality traits, and let the character take on a life of its own, so that he presented a president who was a bumbling idiot and a klutz, one who was prone to falling over the podium.

Similarly, Eddie Murphy, a masterful impressionist (Prince, Stevie Wonder, Michael Jackson), opted out of imitating the monotone and preacher-like cadences of Jesse Jackson’s speech, instead playing off the one-time presidential candidate’s social-tone-deafness, as when he employed his Teddy Pendergrass-like vocal stylings, with three backup singers, issuing a musical plea of forgiveness to “all you chosen people out there,” after he famously referred to Jews as “hymies” and New York City as “Hymietown” in the Washington Post.

Dana Carvey seized on George H.W. Bush’s penchant for speaking in catchphrases. Phil Hartman gave us a glimpse into Bill Clinton’s secret home life, portraying him as a white-trash dawg who binged on fried foods, and after Hartman’s grisly death, Darrell Hammond inherited Bubba and cast him as a loquacious, smooth-talkin’ slithery flirt. Will Ferrell played Dubya as an arrogant, entitled teenage boy burdened by too much responsibility, who just wanted to have fun. Maya Rudolph portrayed Condoleezza Rice as an opportunist; when she spoke on the record, she was Bush and Cheney’s greatest apologist, explaining, off the record, that she did so because they promised her Range Rovers and a shot at the vice-presidency in 2008. Really, she’d admit off the record, she thought Dubya was an idiot, Cheney was a robot, and Ari Fleischer was too busy juggling J-Dates to be paying attention to her warnings that could have prevented 9/11.

Poehler created a righteously indignant Hillary who lacked the charisma, but not the wisdom and experience of her husband, and was horrified that she didn’t nab the Democratic nomination. These are just a handful of notable “SNL” political impersonations, ones that have become iconic because they've made us laugh for years after the fact, influenced our opinions of the candidates and figures (i.e., Tina Fey’s Sarah Palin), and, at times, even helped to establish the careers of the cast members. They were effective impressions less so because of the literal resemblances to their subjects, and more because the comics used those subjects as launch pads for hilarious narratives that yielded endless sketches and punch lines.

Every season, viewers and critics bemoan the mediocrity of “SNL,” and as with every medium — films, books, you name it — are eager to call its time of death. I was ready to join in the chorus, especially after the season premiere, which was absolutely dreadful beginning to end. But last Saturday night, there were a few chuckle-inducers. And then I bore witness to another impression worthy of joining this “SNL” pantheon, even if its shelf life might be short, with less than six weeks to the election (or, I hope, reelection): New featured player Kate McKinnon introduced her Ann Romney on Weekend Update.

Her take on Ann is that of a manic ball-buster (her message to Jeb Bush, Marco Rubio and Chris Christie, who’ve been vocally critical of her husband’s campaign: “If you don’t nut up, you got to shut up”), a devoted and protective wife to Mitt, and socially envious of the Obamas (“I would kill [my prized] horse if I could meet Beyoncé [pronounced BAY-on-SAY].” She doesn’t share her husband’s total disconnect; she is clued in enough to pop culture to recognize she’s not invited to the party. As she laments to Seth Meyers, “Running a Republican campaign is so hard. If you’re a Democrat, you get to eat with cool people like George Clooney. If you’re a Republican, you get to shake Jon Voight’s cold lizard hand.”

In five minutes, she had given us a fully realized, delightfully deranged portrait of this person we love to hate, but with a few unexpected flourishes (the “Godfather”-like desperation to be a Beyoncé fan was a nice touch, as was the “’nad up” line). Her energy was reminiscent of some of my favorite female “SNL” alums: a little bit Poehler, a touch Kristen Wiig-y, some Ana Gasteyer and Molly Shannon thrown in for good measure. But the invention was all McKinnon, and I can’t wait to watch the ever-unfolding drama of Mrs. Romney (even if I hope the couple and their cloned children wither into obscurity post-Nov. 7).

I know Pharoah has the talent to deliver, and give Obama similar treatment — his is, by far, the hardest job of any comedian, to train his magnifying lens on a man we've been watching intently for over four years and blow up some quality we somehow overlooked, and parlay that into something bigger, fleshed out, a whole character, and make it all his own. I don’t envy him, not at all — he has his work cut out for him, and what a daunting legacy to uphold. But I hope I am not going to have to spend, worst-case-scenario (politically, not comically), the next five episodes — or best-case scenario (again, politically, not comically) the next four years — fast-forwarding through the comic Rich Little-ing his way through those interminably long cold opens.