If you're looking for a good set on the cheap, try the LG HBS-700 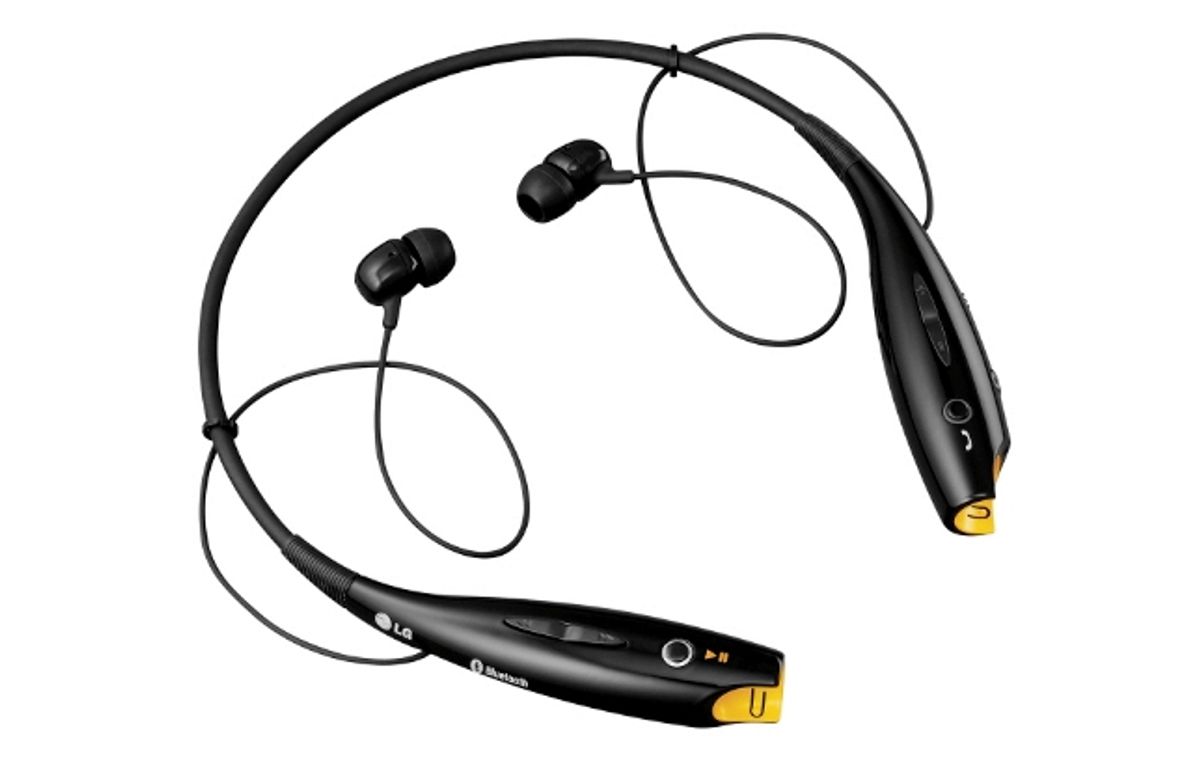 If you're looking to buy a set of reasonably priced Bluetooth headphones, I recommend the LG HBS-700, also known as the LG Tone after testing many and researching them exhaustively for over 12 hours.  Priced at $50, they do a solid job with music, voice calls, and everything else in between.

Let's be clear–most of the time, a set of wired headphones will be just fine. They've got fidelity, never need charging and don't have to be fussed with to sync. They're also lighter, in general, than wireless headphones.

But if you’ve ever had a pair of earbuds violently wrenched from your head by a snagged cord then it’s easy to understand the advantages of going wireless: they provide clutter-free usage  that a traditional wired set of cans or earbuds can't match. There's no tangles, no cables to get caught up on while you're working out or studying. Again, for all of the issues that Bluetooth headphones solve, so far no one's been able to produce a pair that can match the sweet sound fidelity of a pair of wired cans. But if  your audio to be merely additive to another task, then you'l likely be happier with Bluetooth.

When you're shopping for a set of Bluetooth headphones, there's a few things you'll want to look for. You'll want to find a headset that can handle a number of different useage scenarios over the course of a day. You'll want them to have a decent battery life, say at least six hours. When the time comes to juice them up again, it's a win if they don't take all day to charge.  Finally, you'll want them to have a form factor that makes them comfortable to wear. Otherwise, you won't want to use them. We also limited our price ceiling to about $150–any more and you're talking about a piece of gear that will return diminishing returns. Bluetooth headphones might sound better above that, but limited to the quality of Bluetooth audio, we didn't find the need to spend more.

LG's Tone are are light, portable, versitle and of course, cordless–making them perfect for a number of usage scenarios. Connecting them via Bluetooth 2.1 + EDR to your computer, smartphone or bluetooth-enabled MP3 player is dead simple, and as the headset allows for multiple connections, staying connected is even easier. There's no need to re-pair your headphones every time you switch devices: just switch them on, choose the headphones as an audio input/output source and you're good to go. Like most Bluetooth devices, they have an effective range of around 30 feet. But like most Bluetooth devices, obstacles like walls and doors will screw with your reception range.

Once you've got them paired, you'll be able to leave them on standby for upwards of 360 hours. Music playback and talk time? The Tone'll let you groove or yammer away for 10 hours between charges. I found the Tone's recharge time to be agreeable as well. In just two and a half hours, you'll have a full battery.

Like many sets of Bluetooth headphones, the LG Tone feature a built-in microphone so that you can take calls from your smartphone or Skype calls from your computer without having to take the headset off. Provided your phone supports them, there's a number of other convenience features too: call waiting, call reject, SMS reading, auto reconnect, auto redial, and voice activated dialing all make an appearance with the LG HBS-700. But these functions are only available to Android users through the use of a 3rd party app. That said, with the vast number of iPhone specific acessories out there, it's hard to get mad at a little Google love. The Tones also come with audio control functionality baked into them, so you can use the rocker switches on the headphone's neckband to shuffle through tracks, pause or start your music and adjust the volume. I confirmed they work well with iPhone, a couple of Android handsets and an iMac.

For anyone planning on using the LG Tone to work out with, you'll get easily reachable controls and a flexible around-the-neck design that stays put. Desk jockeys get vibrating alerts for calls and noise cancellation from the Tone’s single mic. Everyone gets decent audio quality, respectable battery life, and solid enough connectivity to leave your wired earbuds behind. What's more, it comes in a package that weighs a total of 32 grams and at a cost of $50.

I'm not the only one who likes these headphones after testing them.

Nicole Lee of CNet praises the headphones in her  review of the HBS-700, calling their audio quality “very good."  She also describes it as “one of the most comfortable stereo Bluetooth headsets” the staff has ever used. Call quality gets a passing grade too, but it’s the 'no-look' volume rockers and flexible 8.5-inch neckband that take the cake. Lee gave the HBS-700 an overall rating of 7.7/10.

PC Magazine’s Jamie Lendino says the HBS-700 are “easy to recommend” and great for frequent travelers in his review. He liked that the magnetic cups that house the earbuds can be snapped to the headset's neckband for easy stowing. The HBS-700’s range and battery life also got high marks, squeezing out an impressive 11 hours and 28 minutes of continuous music during his tests. But the Tone's bass response was hit-and-miss for Lendino, leading to an overall 3.5/5 or “Good” rating from him.

Perhaps the fact that speaks the best to the quality of the Tone is that over 1400 Amazon users have reviewed them since they debuted on the shopping site over a year ago, and the consensus is largely positive. The Tones currently hold a 4.5/5 rating with over 950 5-star reviews. Amazon member David Parenteau nails the good and bad of the HBS-700’s earbuds in his exhaustive (and ongoing!) 5-star review. In his ‘pro’ column he praises the overall secure fit of the buds. Under ‘cons’ he notes that the sealed bud design might not be the greatest fit for all situations (like outdoor running). His summary (included below) echoes the same conclusion I reached after web research, expert interviews, and even hands-on testing:

“Overall this is an extremely nice headset and will work well for most people in most cases. The specialty cases and caveats are mentioned above. Several guesses that people have taken in other reviews were directly researched to address. For the price, these are a Must Get for anybody who wants wireless freedom.”

However, as good as they are, they're still Bluetooth headphones, and therefore, flawed.

As with any bluetooth headphones, signal interruption between your audio source and the Tones can occur, due to the fact that Bluetooth is based in the crowded 2.4GHz RF band along with other hardware like traffic cameras and kitchen microwaves. So, interruptions can be frequent in RF-heavy settings like a bustling city center. If a Bluetooth headset strays too far from its streaming audio source (usually 20-30ft) it will also cut out. Finally, since the transmitted audio is often compressed, the dynamic range tends to suffer. This often translates into anemic bass. But unless you're an audiophile, you might not notice. You could argue that some newer Bluetooth headphones that leverage CD-quality audio codecs like apt-X solve the problem of weaksauce music reproduction, but the hardware that the codec's baked into are typically more expensive, like Phiaton’s great-sounding-but-meh-fitting $99 PS 20 BT.

There’s a short list of HBS-700-specific problems too. In his review of the Tone, Lendino brought up the fact that the neckband can begin to chaff after using the them for an extended period of time. Those with long hair or who routinely wear a collared dress shirt may find that they have fit issues as well. It's also worth mentioning that the Tones aren't 100% sweat-proof either.

For the basic user who wants the convenience of wireless music, I’d argue that these complaints are of little consequence.

As part of my research, I tested four different models of headphones directly (it would have been more but not everyone I requested headphones from sent them out to me) and looked at the reviews and technical specifications of 15 different sets. None of them could match the combination of value and features offered by the LG Tone. JayBird's Sportsband sells for $91, and while Amazon users like their pivoting ear cups and moisture-sealed controls, they also complained that they're bulky and that they have a rubberized headband that doesn't breathe. At $77, Plantronic's BackBeat Go are a better deal, but they can only pair with one device at a time, have a lousy 4.5 hours of battery life and won't stay in your ears while you exercise (according to our own Seamus Bellamy.) Jabra's Clipper headphones are cheaper than the LG Tone–$31! But they don't offer any noise cancellation and the earbuds are pretty crappy. You could go with the Outdoor Technology DJ Slims for $69, but their build quality isn't the best and users complain that their ear cups leak sound. Nokia makes Bluetooth headphones too: their BH-503 headset only costs $55 on Amazon, but they don't fit some people's heads and while they're still easy to find online, the company's no longer making them. Motorola's $94 SF600 headphones are a pricey option for gym-goers, but despite being advertised as 'sweat-proof' I was able to find a lot of complaints about the headphones breaking down due to sweat-related damage. JayBird's Freedom Sprint headphones? Forget about them. They cost $130, and unless you stash your phone on the right-hand side of your body, their reception sucks.

If you sweat like a pig when you work out, you might want to opt for a pair of headphones like JayBird’s Freedom bluetooth earbuds. They come with a lifetime sweat protection guarantee. But they cost almost twice as much and provide four less hours of battery life per charge than the LG Tones do. CNet Editor David Carnoy tipped me off to Denon’s Exercise Freak as another solid-fitting pick for exercise. But at $149 with only seven hours of battery they're far too expensive for what you get.

The Headphone.com editorial team recommended Phiaton’s PS 20 BT.  After using them for close to a month I can see why. Not only is bass response phenomenal (for Bluetooth), but the clarity at high volumes is begging for a bout of tinnitus. However, the HBS-700’s ‘barely there’ neckband and battery life beats Phiaton’s awkward clippable pod design and 6-hour battery life any day.

PC Magazine rated  the Samsung HM6450 slightly higher than the LG Tones, and gave the device their Editor’s Choice Award. The HM6450s is a Bluetooth headset that can do double duty as a set of wireless headphones by allowing users to plug a pair of their favorite wired headphones into it, ensuring a better headphone fit than a one-size-fits-all set of Bluetooth headphones can provide. It’s an intriguing form factor, but it’s arguably a step in the wrong direction. The 'grab-and-go' appeal of the HBS-700 is a better fit for casual use. If we’re taking the time to consider swapping in decent wired buds what’s the point of going wireless in the first place?

From my research, I found that LG's HBS-700 hedges out everything else out there in terms of usability, offers a healthy helping of features, and well, they're cheap cheap. For the average user that’s more than enough reason to buy them.

What To Look For:
LG will soon be releasing the HBS-730, which is basically the HBS-700 with a new chipset, more bass, apt-X, improved voice quality, and voice prompts. As one of the few people who’s tested it, I can tell you it’s a step up audio-wise and two steps down connectivity-wise. Both of my review units cut out constantly during motion. Switching back to the HBS-700 just confirmed this quirk. That said, the HBS-730 doesn’t sounds great…if you’re sitting still at a desk.