I've been a fan for most of my life, but it's turned into a dark, sleazy habit that, like smoking, I need to drop 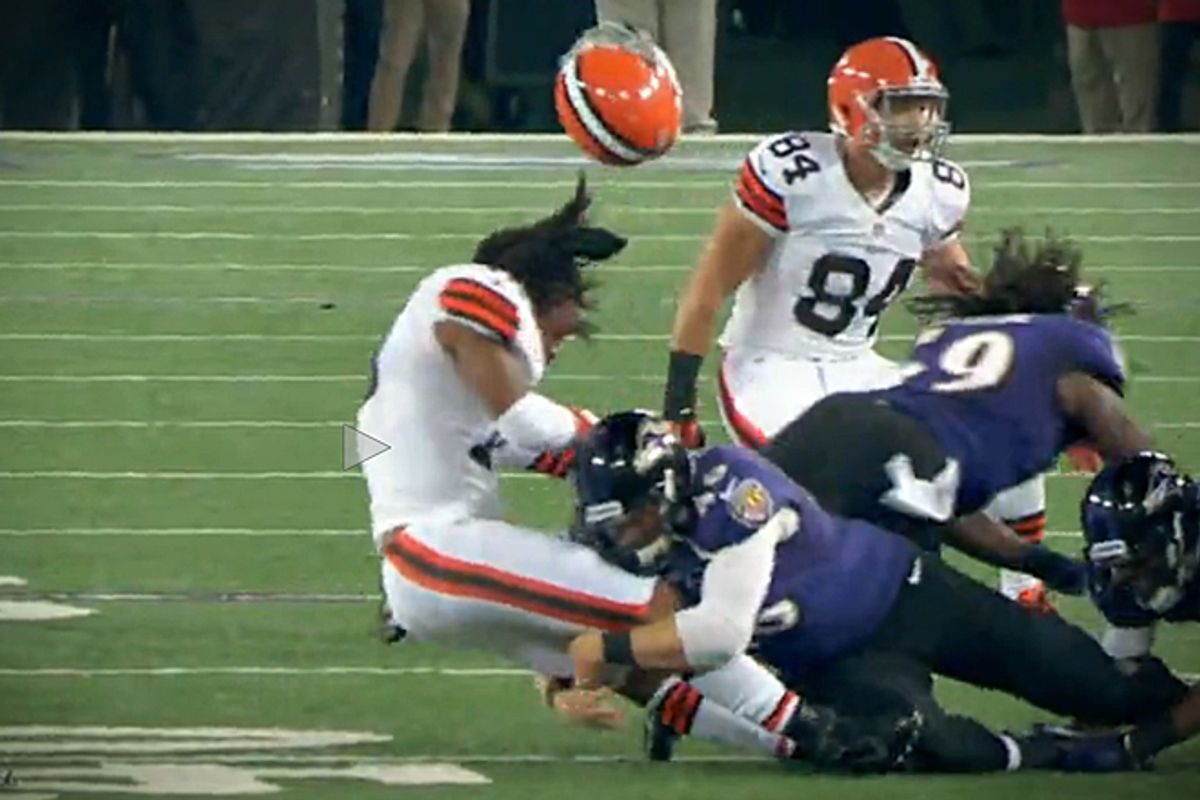 On the evening of Oct. 22, 2001, I found myself riding around a bar in New York’s East Village on the back of a gentleman I’d met only a few hours before. It was the final minutes of a Monday Night Football game between the Philadelphia Eagles and the New York Giants. Eagles’ quarterback Donovan McNabb connected with James Thrash for a touchdown putting the Eagles ahead of the Giants 10-9; the score would hold and the Eagles would win the game. The gentleman was the only other Philadelphian and Eagles fan in the bar and the minute I saw the official's arms go up and signal touchdown I leapt on that guy’s back and he gave me the craziest piggyback ride I’ve ever had. He had surprisingly strong legs and he used them to run all over that New York City bar while we sang the Eagles fight song in front of the assembled Giants fans.

We only stopped when a large security guard came over and said, “All right, you boys have had your fun, now knock that gay shit off.”

During the course of that game I must have eaten about 30 chicken wings, smoked a pack of cigarettes and had about 12 to 80 beers. I spent three hours giving in to some of my most hedonistic impulses in an effort to ease the delicious torture of a close football game, and the payoff was a euphoric two-minute victory lap in hostile territory on the back of a stranger.

When I think about why I fell in love with football, I think about that night. I love the ritual, the tension, the food, the gluttony, the occasional payoffs (4th and 26!) and the bizarre sense of community. Football is an amazing unifier; I can’t tell you how many times football has bridged for me gaps created by politics, religion and geography.

But it’s getting harder to ignore that, despite how much I enjoy the sport, its good qualities are increasingly outweighed by the bad. Like cigarettes, chicken wings and too much booze, football isn’t very good for me.

First, perhaps, came the realization that I’m watching young men destroy their bodies and brains for my entertainment. It sounds like an excuse, and maybe it is, but I was slow on the uptake when it came to realizing just how viciously the game ravaged its players bodies and minds. Sure, I’ve always understood that football is a violent sport. One of my first memories of the game is of watching the Super Bowl in 1988 with my sister and seeing the Bengals’ Tim Krumrie get his leg magically reduced to a piece of floppy spaghetti right before our eyes. Yet somehow broken bones, no matter how gruesome, never seemed to stir my conscience. Players seemed able to heal magically from broken bones. Hell, Tim Krumrie came back and ended up playing another six years in the NFL. In my mind, broken bones, potential career-ending injuries and the once-in-a-blue-moon threat of a spinal injury were why players made the big bucks.

Thinking of football in terms of those big, gross and (sort of) rare Krumrie-style injuries distracted me from really giving much thought to what the cumulative effect of a life in football must be like. I understood that there were injuries out there that weren’t as obvious and kept players on the disabled list for a few weeks but, maybe naively, it didn’t occur to me that those injuries would greatly diminish the players’ quality of life after their playing days were done. I certainly never stretched far enough to think about how the daily grind and the injuries that weren’t obvious affected the long-term health of the bodies and minds of my favorite players.

In recent years it’s become more difficult to maintain the fantasy of players having healthy, happy lives after football. The reality of the situation is that with every former player like Andre Waters, Dave Duerson and Ray Easterling who commits suicide and is later discovered to be suffering from the progressive degenerative brain disease CTE (chronic traumatic encephalopathy), a disease that is caused not by a major blow to the head (although they don’t help) but by repeated exposure to sub-concussions (which Barry Petchesky at Deadspin succinctly describes as “Blows not severe enough to register at the time; trauma doesn't have to be traumatic.”), I am forced to face the fact that with every snap of the football I’m probably watching at least one or two players on the field slowly turn themselves into the next Andre Waters, Dave Duerson or Ray Easterling. I’m sitting there eating my ribs and drinking my High Life and cheering while the guys on the field diminish their life expectancy, increase their risk for depression, psychotic erratic behavior and early -onset dementia with a side of Parkinson’s-like symptoms. It’s also unclear how many of those guys understood those realities when they signed up for the fame and fortune that come with this job.

The suicide of University of Pennsylvania player Owen Thomas, whose autopsy revealed early stages of CTE, has scared me off college ball almost completely. The thought of kids destroying their brains at a nearly professional level without even the benefit of compensation or the promise of long-term healthcare just got to be too much for me. I couldn’t figure out a way to compartmentalize that grim reality so I’ve pretty much just stopped watching.

And while you can argue that the same sort of physical destruction of the athlete is true for boxing and hockey and any other full-contact sport, the difference is that I’m not watching boxing and hockey all weekend, I’m not spending money on boxing tickets, or purchasing a Bernard Hopkins shirsey. For that matter, USC is not offering  full-ride scholarships to 13-year-old boxing and hockey prodigies, and the PAC 12 and ACC don’t sign billion-dollar TV deals because of their boxing programs. For my time and money, football -- our country’s most popular sport -- has been king, president and dictator all rolled into one.

The culture surrounding football is also so confused; the priorities are so backward it’s impossible to feel good about being a part of it when you actually step back and take an honest look. And yes, there’s Penn State. To this day, I will argue that the series of events that led to a major university harboring a sexual predator were less about football than myopic institutional self-preservation. I don’t doubt that other universities would (and probably have) covered up for marquee academics in an effort to save reputations, further legacies and ensure continued money from donors.

Still, there are far fewer marquee academics than there are marquee football coaches. If it ever were discovered, for instance, that UCLA had covered up that Jared Diamond had been fired for selling meth to elementary school students, I doubt UCLA students would start overturning news vans and setting things on fire.

That’s the power of football, and if I’m honest with myself, growing up in Pennsylvania as a football fan, there is a part of me that understands where those students were coming from. When I visited my wife’s family in Texas for the first time and they discovered I was from Pennsylvania, they all mentioned Joe Paterno and the standards at Penn State and admired how seriously we Pennsylvanians took our football. It was in that moment that I realized that I had internalized a football program that I had nothing to do with, at a school I never went to, in a part of the state I almost never visited. It had become a bizarre point of pride for me. Can you imagine what that pride would mutate into if I had any real involvement or connection to that school?

Even the good football news is tainted. This week I wanted to rejoice when Roger Goodell and the owners failed to break the back of the union that represents the striking referees. The replacement refs were sent packing with extreme prejudice and the real refs returned to officiate the Thursday night game in Baltimore. Woo hoo! Labor wins! Labor wins! For the first time in my memory the media, politicians on both sides of the aisle, and the majority of the American public reached consensus regarding a labor dispute and the Davids beat the big bad corporate Goliath. It was a victory, no doubt, but all I could think was how bad I’d feel if I were a Chicago teacher right now -- if I were any teacher, or a firefighter, or a cop, or government employee and every time I tried to fight for that little piece of the pie for doing necessary work like teaching or putting out fires, half the country and its politicians called me lazy and greedy. And then how would I feel as I watched America coalesce for one shining moment and say that the specialized skill job that we all finally could agree deserved protection, the job we’re going to the mat for, was a football ref?

From pharmaceutical addiction among players, to the pressures and abuses heaped on high school athletes, to the stories about players like Vince Young who manage to run through all their money by the time their careers end, the house of football, where I go to worship every Sunday, is built on a foundation of unsavory, and predatory practices.

For me football is like smoking. In the moment I’m enjoying it, it tickles my senses in a way that’s nearly indescribable. But after a night of smoking, my body feels awful; after a day of watching football my soul feels awful. So I’ve tried to begin treating football in the same way I treat smoking, cutting down where I can; no college football unless I’m in Texas, no Thursday or Monday Night Football unless the Eagles are playing. No post-game, no ESPN. It’s working. But just like those last 10 cigarettes a month that I’m working on getting rid of, I know that even that much football isn’t good for me.